More minis - The Folk Keeper by F. Billingsley, Poison Study by M. Snyder and The Garden of Happy Endings by B. O'Neal

Once again, these are mini reviews of books that came from my personal library. 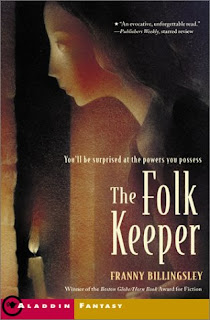 The style in both books is very similar; both are fantasy and in both cases, Billingsley doles out clues slowly and sparingly so that it takes a while to figure out where you are and what's going on . . . but in a good way.  You know how sometimes it can be terribly frustrating to have an author keep too many secrets from you, but at other times it feels more like a mystery is slowly unfolding and it's more of an adventure?  The Folk Keeper was the latter.

I am so impressed with Franny Billingsley.  The Folk Keeper is a middle-reader about a girl masquerading as a boy to get the job of Folk Keeper -- a person who keeps the harmful Folk at bay.  Taken from the foundling home by a dying Lord, she is transported to a manor where she will continue her job as Folk Keeper in the cellar.  But, there are new dangers near the seaside and there is much that Corin/Corinna doesn't know about herself.  Scary and original enough to compete with a Gaiman, with a bit of magic and even a tiny touch of romance.

Highly recommended - a dark, mysterious, atmospheric book, beautifully written and deliciously creepy.  The Folk Keeper was the perfect read to end 2012 and would make an absolutely wonderful read for the annual R.I.P. Challenge. 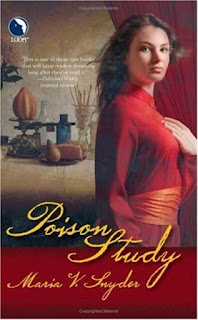 Poison Study by Maria V. Snyder is actually Kiddo's book.  I noticed Snyder has a more recent series and since Kiddo has read two of her series and enjoyed them, I bought him the two newer titles for Christmas then asked if I could read one.  Instead, Kiddo shoved Poison Study into my hands.  Here's what Isabel has to say about Poison Study:

Obviously, she missed some key discussion points.  Poison Study is about Yelena, a woman who is reprieved from a death sentence for murder when there's an opening for the job of food taster to the Commander of Ixia.  Not only must Yelena take her chances with the potential for poisoning (because there is no escape), she must also keep her eyes out for the people who want to kill her for the murder she committed.  Plus, she's got a little bit of a magic problem -- a touch of magic in a place where magical ability alone is a death sentence -- and she's haunted by the ghost of the man she killed, a very nasty man who deserved to die.  Just so you know Yelena is a cool chick.

There were things I disliked about the world of Poison Study, but once I became accustomed to it I loved the story, even though I thought it bore some similarities to the only Snyder novels I've read: Inside Out and Outside In.  A super-tough heroine who sometimes doubts her own strengths and abilities and gets beat up quite a bit, plus a very evil bad guy and at least one character who is not what he or she seems were the common denominators I recognized.  Regardless, I loved Poison Study and actually had a little trouble switching gears when I picked up the next book.  Poison Study was my first read in 2013.

Highly recommended - A very entertaining read with numerous dilemmas, a touch of magic and an action-heavy plot. 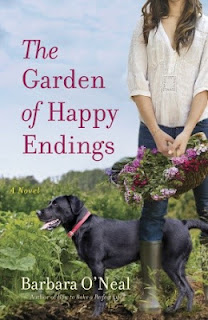 The Garden of Happy Endings by Barbara O'Neal is a book I won in a drawing, last year, after a friend's gushy recommendation just happened to coincide with a blog drawing.

In The Garden of Happy Endings, minister Elsa's world is rocked when a young girl from her church is murdered.  Unable to help her church family through their grief because she is having her own crisis of faith, Elsa leaves Seattle to spend time with her sister, Tamsin, and her former fiancee, Joaquin (aka, "Father Jack") in Pueblo, Colorado.

In Pueblo, Elsa stays busy helping build a neighborhood garden and serving in Father Jack's soup kitchen while helping her sister through a crisis of her own.  There are a lot of personal crises in The Garden of Happy Endings, some really scary trouble with gang members, a few poignant moments with parishioners and a bit of a romance.

I liked The Garden of Happy Endings but I didn't love it and I can't quite put a finger on why. There was just something about the writing style that bothered me a bit, I suppose, or perhaps it was a little too predictable.  Regardless, The Garden of Happy Endings is an engrossing story that explores some deep topics and which contains a surprising amount of conflict of both the internal and external varieties -- stuff happens, in other words, and yet there is a nice balance of darkness and light.  While the book addresses God and faith, it's not a preachy book.

Recommended - A nice, light read about life, love and faith that is very difficult to put down. I'd recommend The Garden of Happy Endings for beach reading.

©2013 Nancy Horner. All rights reserved. If you are reading this post at a site other than Bookfoolery and Babble or its RSS feed, you are reading a stolen feed. Email bookfoolery@gmail.com for written permission to reproduce text or photos.