The Tutor's Daughter by Julie Klassen 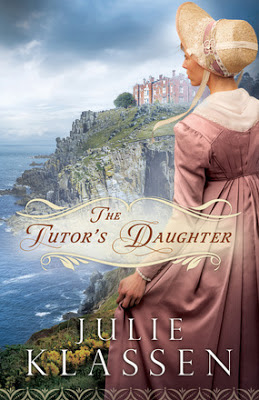 The Tutor's Daughter is a novel set in Regency England, on the Cornish coast, and I think it was probably the setting that drew my interest when I read about it.  Wow, great choice, by far one of the most engrossing, entertaining books I've read, so far this year!

Emma Smallwood's father, a tutor, has slowly lost interest in life since the death of his wife, two years past.  With his small boarding school now trickling down to nothing, Emma is concerned and takes it upon herself to write to Sir Giles Weston.  His two eldest sons attended her father's school but the younger ones have not.  Perhaps he would be interested in sending the twins?

Sir Giles responds with an offer to pay Mr. Smallwood twice his normal fee if he'll move into Ebbington Manor to teach his youngest sons for a year.  Miss Smallwood is invited, as well.  Eager for a change of pace, Mr. Smallwood accepts.

But, strange things are afoot at the manor on the cliff.  Everyone seems to have a secret and mysterious happenings are a part of daily life.  Is a ghost playing the pianoforte at night?  Why isn't Emma allowed into the North wing of the manor?  Who is sneaking into her bedroom, stealing things and leaving frightening messages?  Is that shifty man who occasionally appears at the home a wrecker who watches men die on the rocks then sells their possessions?

Questions, questions.  And, I haven't even addressed the main characters.  Emma and two of the sons, Henry and Phillip, seem to be involved in a love triangle. But, maybe not.  What about the Weston's ward, Lizzie?  Who is she in love with and what is she hiding?  And, ugh, the nasty stepmother who wants to marry off Henry or Phillip to her wealthy friend's eligible daughter!

What I loved about The Tutor's Daughter:

Things happen.  Lots of things happen.  But The Tutor's Daughter is not only plot heavy but also has beautifully developed characters that you'll either love or love to hate and they don't all turn out to be quite what they seem.  There are some truly exciting moments.  Danger!  Action!  The setting in Cornwall is likely the same area you read about in some of Daphne DuMaurier's books, like Jamaica Inn, a dangerous coastline notorious for causing shipwrecks and where "wreckers" would lurk to claim goods from the ships as they washed to shore.

The romance in this novel, such as it is, develops slowly and realistically.  There's the usual, "But, she can't possibly end up with either of the brothers because she's nothing but a lowly tutor's daughter!"  We all know how that always ends, but . . . well, let's just say this is my first book by Julie Klassen but it will definitely not be my last.  I was so impressed.  There are plenty of little twists and turns and surprises.

I think it's worth mentioning that Emma also has a crisis of faith.  One of the characters gets a tiny bit preachy with Emma, but he's genuine about his beliefs and if The Tutor's Daughter didn't happen to be a Bethany House novel, I don't think I'd have given it much thought.  I'm always looking for the God references in Christian publications because I know some people get freaked about about them.  I didn't personally find the Christian aspect dominant although, as I said, the one character does have his moments of preachiness. They tend to occur at times that reflection on faith is common.

What I disliked about The Tutor's Daughter:

I have absolutely nothing to criticize, although a couple Americanisms did manage to sneak into the narrative.  Just a couple.  In general, the dialogue and writing was otherwise utterly convincing - among the best I've read.  I don't think I can take off even a fraction of a point for such slight errors.

My thanks to Christen at Litfuse for the review copy.

©2013 Nancy Horner. All rights reserved. If you are reading this post at a site other than Bookfoolery and Babble or its RSS feed, you are reading a stolen feed. Email bookfoolery@gmail.com for written permission to reproduce text or photos.
Posted by Bookfool at 12:06 AM