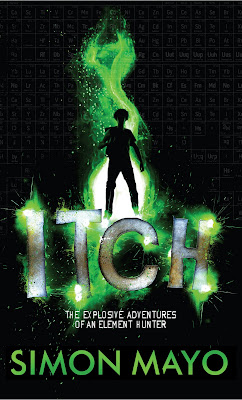 Itch: The Explosive Adventures of an Element Hunter by Simon Mayo
Copyright 2012
Splinter (an imprint of Sterling) - Young Adult, first in a series
425 pp.

Source:  ARC from Sterling for review; released April, 2013 in the U.S.

The truth is, if you sleep in the room next to a fourteen-year-old science-crazed boy who likes to blow things up, you learn very quickly only to take notice of the very big bangs.

Why I read Itch:  I have been totally craving YA reads, lately, so I was ridiculously excited when this book was offered to me for review.

"Itch" is the nickname of the hero in this book, Itchingham Lofte.  Itch is a 14-year-old scientist living in Cornwall (a British shire, or county - way down at the lower left on this British Shire map) with an unusual interest.  He is passionate about the Periodic Table of Elements.  He has studied the elements thoroughly and has a small collection of elements that he keeps in his house -- or did, till he burned off his eyebrows and his mum made him move everything to the shed.  That is, in fact, how the book begins, with an experiment gone wrong that fills the Lofte house with a nasty burnt odor and removes the eyebrows from Itch's face.  But, Itch makes an even worse mistake that causes his entire school to shut down.  And, then things go from bad to worse when Itch purchases an element that isn't even on the Periodic Table -- an radioactive element that's so important people will kill to acquire it, if they don't die first.

What I loved about Itch:

Itch is a rocking fine adventure.  It starts off with a bang (no pun intended -- and, technically, just after the bang) with a few laughs and eventually becomes a race against time.  The whole "boy genius" thing has been done and done again so I was a little nervous that Itch might veer toward the cliché but once I got into it, I enjoyed myself too much to think about tropes.

What I disliked about Itch:

There is way the heck too much throwing-up in Itch, thanks to poison and radiation. However . . . I kept going, which just goes to show you how much I love an adventurous, action-packed plot.

Will I read the next book in the series?

Yes, but if in spite of my love of action and adventure and people running from bad guys (my favorite dreams are the ones in which I'm running from bad guys -- interesting, no?), there's only so much heaving a girl can stand so if Itch keeps poisoning everyone, I'll stop at #2.  The next book in the series is Itch Rocks.  I don't know when it will be published in the U.S. but I asked the author if it has already been released in the U.K. via Twitter and he said, "Yes."

Recommended - An exciting action/adventure with a clever hero, some delightful side characters and a nice comedic touch, terrific for escapist reading but with a warning that there is a lot of vomiting in the book.  In spite of the fact that I can barely even stand to read the word "vomit," I was never tempted to set Itch aside.  It's just too entertaining; the pages flew and I loved the writing enough that I occasionally read passages to my husband (or besieged him with science questions). And, I just blocked the bad mental images; it's a special talent of mine.

I told Kiddo about the book and when I said the hero is collecting the elements from the Periodic Table, he laughed and said, "Good luck to him.  Some of them are very unstable or radioactive." And, he does plan to read Itch.  Am wondering why Kiddo is studying business rather than science, now.

Forgot to add my thoughts about the cover -- worth mentioning, in this case, because I absolutely love it.  What a grabber!  Glowy green explosion surrounding the main character and title?  Super choice!  And, I love the faint backdrop of the Periodic Table.  The Itch cover is definitely one of the most outstanding covers I've seen, this year.  I also forgot to mention that Itch is a great hero, the kind of young hero one appreciates because he's got a good heart.

©2013 Nancy Horner. All rights reserved. If you are reading this post at a site other than Bookfoolery  or its RSS feed, you are reading a stolen feed. Email bookfoolery@gmail.com for written permission to reproduce text or photos.
Posted by Bookfool at 8:44 PM