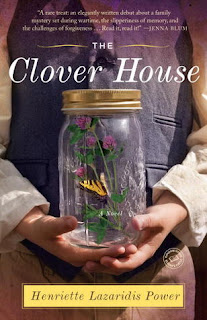 Callie Brown's uncle Nestor in Patras, Greece has passed away and left her the contents of his house.  Callie believes something in that house will explain her mother's oddities -- why her stories don't match up to those of of her sisters, why she has always been seemingly unable to love or even speak a kind word, why she was so unhappy in America, why she left Greece in the first place but returned, years later. At the same time, Callie must try to figure out her own problems. Why did a proposal from her boyfriend of three years cause her to panic?  Is it possible for Callie to give her heart to one man?

Where it takes place:

Boston, briefly, and Patras, Greece during WWII and the year 2000

What I liked about The Clover House:

As usual with a book that leaps back and forth between an historical time period and a contemporary story, interconnecting the two, I preferred the historical story.  It's set during WWII in Greece and it was yet another fresh perspective on WWII.  I liked the fact that Callie's mother's stories didn't necessarily match up with those of her sisters and the statement the author was trying to make about memory being unreliable, slanted and -- at times -- perhaps less important than the emotional weight we sometimes attach to it (from a personal standpoint).


The door to the stairs is just there, across the foyer.  But on that earlier visit, I was looking for the site of an innocent childhood game.  Instead, I learned that even a shared experience can splinter into conflicting memories.

I also really loved the stories from WWII, which are essentially the stories the author's family told her, with a few modifications for dramatic effect.

What I disliked about The Clover House:

Callie and her mother bear some similarities to my relationship with my own mother -- not in quite so horrid a fashion, but in the manner of "traumatized mother who is unable to share her early experience with her child."  Callie manages to weasel quite a bit of info from her mother and aunts, although the end result is rather like a puzzle that's still missing handful of pieces.  In my case, even as she was dying my mother was still unwilling or unable to talk about the years before my parents married and her only living sibling also won't say a word.  I don't like that, but I accepted it a long time ago and I found that I had very little patience with Callie's quest for information.  She was lucky to have such a big, happy extended family that was welcoming to her.  That would be enough for me.

I also absolutely hated the contemporary setting -- not the place, but the setting in the midst of the annual Carnival, which sounded a bit like a very extended Mardi Gras with some extra immorality tossed in for good measure.  It's the kind of setting I do my best to avoid in real life -- raucous, drunken crowds.  Blecch.  Not my thing, so I didn't particularly like reading about it.

Recommended but not a favorite - Loved the WWII storyline, disliked the main character and I found that the mystery of what happened to Callie's mother unfolded too slowly for my liking.  I was tempted to set the book aside about halfway through, but I'm glad I finished it.  In the end, I found the story was wrapped up in a satisfying way -- a bit like real life in that not everything is complete, but the heroine redeemed herself (although I never really did like her).

There are some strange sentences at the beginning of the book and my immediate thought was, "Oh, no, I hope I don't feel like breaking out a red pen all the way through this book."  I didn't. Although there were times I thought a sentence could have been improved upon, The Clover House is really quite well-written, apart from those few bits at the beginning.  Sometimes the author can be very wise and thought-provoking.

©2013 Nancy Horner. All rights reserved. If you are reading this post at a site other than Bookfoolery  or its RSS feed, you are reading a stolen feed. Email bookfoolery@gmail.com for written permission to reproduce text or photos.
Posted by Bookfool at 3:00 AM