Good grief, we've already lived through 3 months of the year 2013?  How is that possible? Someone explain this to me.

So . . . time for a quarterly reading update.  Here's what I've read, so far this year (with links to books I've reviewed or at least mentioned):

I'll try to get all caught up on those I haven't reviewed, soon.  Except Jericho - not reviewing that.  I've pre-scheduled my review of On the Other Side (a Persephone book!) for tomorrow.

And, today . . . (after dropping the husband off at the airport and buying some seedlings to plant):

I looked up the definition of malarkey -- well, actually, I was looking it up to make sure I wasn't misspelling the word (there are two acceptable spellings; I am not senile, yet) and found the following synonyms at Merriam-Webster.  Am I alone in finding it hilarious that there are so many food synonyms for malarkey?  Applesauce and fudge?  Guys, the synonyms are as fun to read as the word is to say!

This is a terrible photo (I was in a hurry and it was shot through a window) but so cool!  Kiddo's girlfriend cut his hair out on the patio, a couple weeks ago (and, then I helped out by showing her how to layer it, which is necessary because he has a ton of hair).  After we were done, I grabbed all that hair and threw the clippings into one of our planters.  I think the kids thought I was crazy but I figured the birds might like to use it for lining nests.  Till recently, it didn't seem to be of interest to the birds -- none appeared to have been removed from the planter -- but look what I saw, this morning!!! 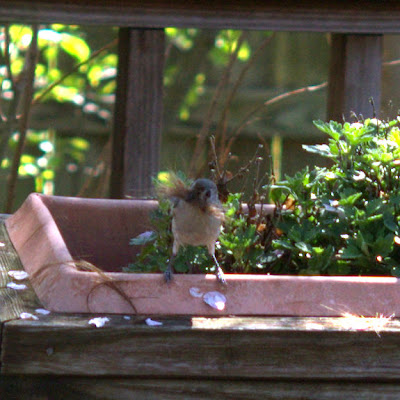 I have no idea how to get rid of the Merriam-Webster frame I foolishly imported, above. Horsefeathers.

Anyway, that little animal in the photo, my friends, is a tufted titmouse with a beak full of my son's auburn hair!  You can see the bird was a little sloppy and left some hair lying about, but either s/he came back for more or it blew away because there's nothing sitting on the edge of the planter, now.

1.  I got so many I'm embarrassed (mostly from friends and Paperback Swap, but still . . . ), and
2.  I just got home from running errands and I don't feel like taking pictures.

But, if anyone begs, I might be convinced to take a picture.  You never know.  I am currently reading The Clover House by Henriette Power and one of the books I got from a friend, Z by Therese Fowler -- that new novel from Zelda Fitzgerald's POV.  I'm loving both.