On the Other Side by Mathilde Wolff-Mönckeberg 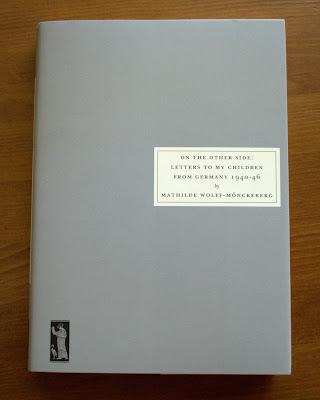 On the Other Side: Letters to my Children from Germany 1940-46
by Mathilde Wolff-Mönckeberg
Copyright 2007 - I think.  Originally publ'd in 1979; revised edition released in 2007
Persephone Books - nonfiction/personal letters
205 pp., incl. Preface, Family Tree and 2 Afterwords

Perhaps you cannot imagine what life is like for Jews.  Their ration cards are printed on the outside with a large red J, so that everybody knows at once that they are non-Aryan.  All women have to add the name Sarah to their first names, the men Israel.  They never get special rations, such as coffee, tea or chocolate, nor do they receive clothing coupons.  After 7.30 at night they are not allowed out into the street; their radios and telephones have been removed.  Practically every shop and restaurant has a notice saying 'Jews are not wanted here.'  It is so vile and mean that I can only blush with embarrassment while I write this.  But you and your children must know of this, that things like this are possible in Germany under our present régime. You will hardly credit all this, or the fact that we others have stood by and said nothing.  And there are much, much worse things. Many people have committed suicide because they could not bear this indignity.  Then, like vultures and hyenas, they [the Nazis] rush in and grab the belongings of the dead; honest names are smeared with filth, and decent Germans have been driven to emigrate by the thousand.

I have my husband to thank for this incredible read.  He recently spent a little over a week on business in England and I sent him with a prioritized list of titles and instructions to dash over to Persephone Books if he could find the time.  He was in meetings or on the road all week but after the meetings closed he had a whopping two hours to shop on his last day and he went to Persephone's Bloomsbury home! I think I'll keep him.

On the Other Side is just what the subtitle says, letters written to the author's adult children during the years of WWII, but the letters Mathilde Wolff-Mönckeberg wrote to her children were never sent.  Instead, after the war ended, she stuffed them in a suitcase that wasn't discovered until 1974.  Mathilde, or "Tilli" had 5 living children at the beginning of the war and only one of them still lived in Germany.  When communication to other countries was cut off (first phone calls, then telegrams, then mail), she began writing letters to her children without attempting to mail them.

What I loved about On the Other Side:

Tilli's letters are beautifully written, chatty, intelligent, and shed light on the fact that even fairly early on, Germans experienced deprivations, rationing, bombing attacks and other hardships.  The author lived in Hamburg and was fortunate.  Although she experienced hunger, extreme cold, and lack of sleep due to bombings and rationing, her flat only received minor damage from incendiary bombs and she was able to evacuate to the countryside for a few weeks during the worst of the bombing.  While the letters occasionally speak of such difficulties, her optimism truly never flagged for long.  She knew she was fortunate and said so, frequently.

Fate has indeed been kind to me.  Now with renewed hope, hope of unspeakable beauty, I continue . . .

I think what really makes these compiled letters shine is the author's spirit.  She was scholarly, a lover of music and a skilled linguist.  When one of her children died and his memoirs were sent to her from "the Argentine" she taught herself how to translate Spanish in order to read them.  She was also utterly and completely devoted to her family, open-minded and a warm and caring friend.  She loved life and was never sucked in by Hitler and his allies.

"The baiting, persecution and expulsion of the Jews had inflamed all decent people with anger . . . "

"The Duce Mussolini, that inflated buffoon . . . "

"In truth this whole campaign had been planned long ago, the Führer's blind lust for conquest, his megalomania being the driving forces behind the deed."

What I disliked about On the Other Side:

It's unfortunate that occasionally the author did not go into detail about certain events, especially the daring escape of a woman she knew, apparently from a concentration camp.  I didn't mark the passage but I recall that she described the escape as worthy of any adventurous spy novel . . . or something to that effect.  However, the fact that she didn't elaborate was probably due to the lack of paper and ink and the fact that her intent was to talk about her own experiences and feelings.  Those occasional disappointments were not enough to keep me from giving the book a 5/5.  It's really quite an amazing and well-written account of life during war by a highly literate individual.

Highly recommended - Especially of interest to those who enjoy reading about WWII, history and memoirs, but also a fascinating look at what it was like to be a citizen who did not support war in the aggressor country during and after a war that is often looked at from the victor's side.  The aftermath was different than I expected.  I'd heard about deprivation as punishment, after WWII, but never read anything from the German side.  On the Other Side would probably make an excellent discussion book.

The other Persephone Books husband bought for me: 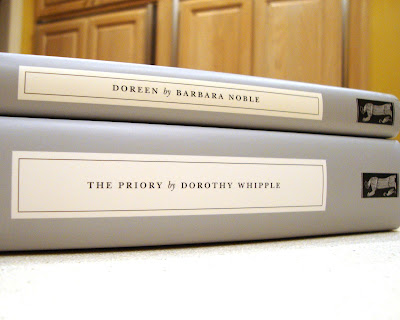 ©2013 Nancy Horner. All rights reserved. If you are reading this post at a site other than Bookfoolery  or its RSS feed, you are reading a stolen feed. Email bookfoolery@gmail.com for written permission to reproduce text or photos.
Posted by Bookfool at 9:30 AM