Things We Couldn't Say by Diet Eman with James Schaap 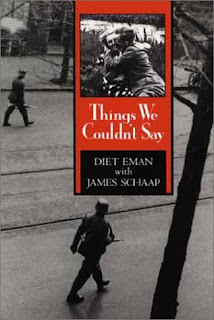 Source:  Personal Library, purchased for F2F discussion . . . which I had to miss due to a migraine.  Bummer.

Diet (pronounced DEET) Eman's story is about falling in love just before WWII and how she and her fiancé, Hein Siestma, helped start a branch of the Dutch Resistance when they agreed to hide 3 Jews by finding them homes with farmers in the countryside.  From the original 3, the number grew and exploded to the point that it was difficult for those in the Resistance to keep up with the needs of the hidden.

What I liked about Things We Couldn't Say:

Let's just stop right at the word "liked" and back up.  I was astounded by the bravery of Diet and her fellow resistance workers.  "Like" doesn't even begin to cover my feelings.  I think Things We Couldn't Say is one of the best WWII books I've read in my life.  It is also one of the most harrowing.   There were many, many times I discovered that I'd been holding my breath during scenes of danger.  How anyone summoned the courage to take the risks Diet and the other Resistance members did (transporting people by train in full view, finding places to hide them, carrying forged ration cards and other documents) is truly beyond me.

The most amazing thing about Diet Eman's story:  Diet and many of the Resistance workers were imprisoned and some died but not a single Jew that they hid perished.  Not one.  Wait, no, that's not the most amazing thing!  The real jaw-dropper was the fact that after being imprisoned, in spite of having lived through horrendous conditions and being faced with torture or death, when she was released Diet went right back to work in the Resistance.

Nothing.  I am shocked that this book hasn't been made into a movie.  It's one of the most heart-pounding, mind-blowing WWII books I've ever read.

When the war ended, I felt like I'd lived through it with Diet.  I had tears of relief streaming down my face.  While I don't think Things We Couldn't Say is as beautifully written as The Hiding Place by Corrie ten Boom, that's actually a good thing.  Because of the way it's written, you can almost hear Diet's accent.  Incidentally, she was held in the same prison as Corrie ten Boom and her sister Betsy, for a time.  Diet and Hein were also Christians and there's a lot of talk about and to God in the letters and diary entries within the pages of Things We Couldn't Say. But in their case Christianity was a guiding light, a comfort and the compelling reason for their continued work.  Their mission was not to spread Christianity but to put its principles to work. There were times Diet was so exhausted she felt as if she couldn't go on, succumbed to exhaustion or felt her faith floundering, but she continued to do everything within her power to provide for those in need till the end of the war.

There were at least two times Diet received warnings that sent chills down my spine.  In one case, she actually heard a voice telling her she'd better get a good look at the man she was with. Although she refused to give in to what she knew in her heart was true, it was the last time she saw that man alive.

Highly, highly Recommended - There aren't enough glowing words to describe Things We Couldn't Say.  I found myself thinking, "If everyone in the U.S. read this book, the whining would go away . . . at least for a while."  It's difficult to fathom the hardship, the terror, the hunger and cold and cruelty people experienced during WWII but as I read . . . I was there.  I was simultaneously terrified for Diet and staggered by her courage and intelligence.

When Diet wrote the book she said, in spite of ample photographic evidence and first-hand accounts, 22% of Americans didn't believe the Holocaust even happened.  That was almost 20 years ago.  Now, we see denial of horrifying events practically the moment they show up on the news, which only makes Diet's story more important than ever, in my humble opinion.

Apologies for the onslaught.  I need to go ahead and write while I'm in the mood and I decided to just go ahead and post three reviews on the same day so that I can add the links to my Books Read in 2013 list.  It's just easier.  I need easy, this week.

©2013 Nancy Horner. All rights reserved. If you are reading this post at a site other than Bookfoolery  or its RSS feed, you are reading a stolen feed. Email bookfoolery@gmail.com for written permission to reproduce text or photos.
Posted by Bookfool at 9:31 PM