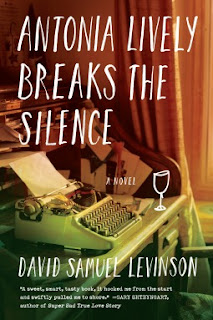 Catherine has been a widow for about a year, her husband's mysterious death still haunting her.  She's working in a bookstore, not making enough to get by, grieving deeply, occasionally going out with friends but otherwise drinking a lot of wine, working, pondering.  When young Antonia Lively, an author whose novel is selling like hotcakes, moves to town, Catherine is intrigued.  She read Antonia's book with fascination.  Her own husband's book was supposed to have made their fortune but Henry Swallow, a respected book reviewer, trashed it and the book didn't sell.

With Antonia Lively's appearance comes Henry Swallow.  Henry is back in Catherine's life and she is not happy, but she needs the money and renting her cottage to Henry, whose home has burned, seems reasonable at first . . . and then intolerable.  What possessed Henry to tear apart a book that many others said hinted of brilliance?  How were Catherine and Henry connected, in the past?  How did Catherine's husband die?  And, what secret is Antonia Lively keeping from her new love?

I found Antonia Lively Breaks the Silence both engrossing and bizarrely vague.  Quite a contrast, but I think the writing is beautiful and it definitely drew me in.  There was just something about the storyline . . . the peeling of the layers to reveal the core . . . that was too slow, too broadly painted.  I wanted the author to be more direct about what happened and what he was trying to say.  Still, it's a bookish novel about bookish people and that alone was entertaining.

A few quotes I marked, the first three because of vocabulary and the latter two because they're thought-provoking:

Had her show of friendliness simply been an act? Catherine wasn't sure, but she was sure about Antonia's irrefragable talent, which, she had to admit, was exciting to her.  Wyatt, she knew, would have hated the story, not because it was terrible but, on the contrary, because it wasn't.

Lover and amanuensis, Catherine thought, but said, "I wasn't sure he was interested."

amanuensis - Noun:  A literary or artistic assistant, in particular one who takes dictation or copies manuscripts.

" . . . their kisses flat and cool whereas they'd once been warm and tumid."

tumid - Adjective (esp. a part of the body): Swollen

"Everyone does have something to say," Jane said, frowning.  "Don't you think so, too, Antonia?"
Antonia paused thoughtfully before answering:  "I think there's something to that, yes.  I also think it's important to see that as writers we have an obligation to give our voices to those who can't speak.  We have to speak for the living who might not be able, and for the dead who can't."

"Good fiction lies to get at the truth," Wyatt used to say.  "Good journalism tells the truth to get at the lies.  It's only great literature that does both.  It presents a world in which the two aren't just intertwined, they're inseparable."  What differentiates a good writer from a great writer, then, Catherine thought, is the victory of his lies -- the scope and determination of his imagination.

Recommended - I liked the bookish aspects, the talk about literature and the fact that most of the key characters were connected in some way to books or writing.  And, the surprise ending actually did surprise me. But, I thought the author could have been a bit more direct and less circumspect in his writing.  It took too long to peel the damn onion, in other words, and once he did . . . I wasn't entirely certain that I understood what had just been thrown at me.  I didn't feel intrigued enough to desire an immediate reread but I wouldn't count that out in the future.

Cover thoughts:  Don't you just love that cover?  I think it's beautiful.  And, what writer/booklover doesn't adore the sight of a typewriter?


©2013 Nancy Horner. All rights reserved. If you are reading this post at a site other than Bookfoolery  or its RSS feed, you are reading a stolen feed. Email bookfoolery@gmail.com for written permission to reproduce text or photos.
Posted by Bookfool at 11:44 AM