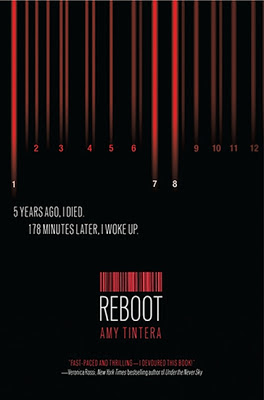 In the future, war and a deadly virus have taken a large portion of the population.  When people die of the virus, some of them "reboot" as slightly stronger but less emotional creatures who can only be killed with a bullet to the brain or a serious head injury.  The longer you're dead before you reboot, the less emotional you are.  Wren is a 178 -- dead 178 minutes, very unusual.  She is a slave to the corporation, HARC, and must go on missions to the slums to bring in people with the virus, those who have rebooted but haven't been turned in by their parents and other lawbreakers.

When she's not on a mission, Wren is busy training new reboots.  Usually, Wren chooses the highest-number reboots because they're easiest to train, less emotional, less likely to die or be eliminated for not measuring up.  But, then along comes a 22 named Callum.  Wren decides it might be interesting to see if she's up to the challenge of training such an emotional and slow reboot.  But, when he defies orders and is about to be eliminated at the same time she is asked to rescue a 39 from certain death, Wren realizes escape is their only option.  But, is escape even possible?

What I loved about Reboot:

Reboot is essentially a new twist on the zombie concept and I loved the uniqueness.  The Reboots have died and lost some degree of emotion and humanity but they've gained different abilities like a stronger sense of smell, strength and speed. They're not brain-eating beings but slightly altered humans.  It took a while to wrap my head around the concept of the Reboot but the farther you get into the book, the more it makes sense.

Wren is a kick-ass female archetype; Callum is funny and charming.  And, while Reboot is Wren's story, it's because of Callum that you see the humanity even Wren doesn't realize is left inside of her.  Besides the excellent characterization, Reboot is tremendously fun, with an exceptional balance between action and interaction.  The ending is satisfying and perfectly wrapped up.  The author could easily carry the story forward (I don't know if Reboot will have a sequel) but there's no annoying cliffhanger ending.

What I disliked about Reboot:

The only criticism I can come up with is that the language in Reboot is a bit too simplistic.  I found myself wanting to upgrade words like "mean" or "dumb" to those with more specific meanings and if I'd been her editor or beta reader, would have nudged the author to ramp up the vocabulary a bit.  The reading level, though, does make Reboot an excellent choice for when you need a bit of a mental break, definitely the kind of book I like to read when traveling -- I have a terrible concentration level on vacation.

Highly recommended, action-packed reading with a solid dilemma, satisfyingly complex plot and a truly lovely romance that builds slowly and believably.  Light, funny, exciting adventure, a strong heroine and a charming hero.  I absolutely adored Callum.  Also, I don't recall any bad language or graphic sex, although there is talk of Reboot sex being a rather mindless hormone-related thing.  I liked how the author treated sexuality and definitely wouldn't have any problem leaving it out where an adolescent could get hold of the Reboot.

Our weather has been so unusually pleasant that we've been going to our local baseball games.  It helps that we've moved 30 miles closer to the ballpark, of course.

A baseball bookmark, just for you:

Sports are 1,000 times more fun when you take a camera.  Humble opinion.