If He Had Been With Me by Laura Nowlin 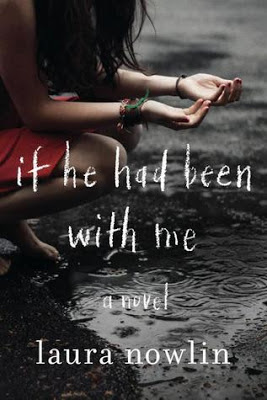 If He Had Been With Me by Laura Nowlin
Copyright 2013
Sourcebooks Fire - YA/Contemporary
330 pp.

I've already labeled this post with the comment that it has sexuality and alcohol use but please read on.  I think in many ways drunken parties and sex are handled well, but they're topics worth discussing . . . in a minute.

If He Had Been With Me tells the story of Finny and Autumn.  Finny has tragically died (the title gives you a hint of how Autumn feels things would have turned out if she'd been present) and If He Had Been With Me reflects on Finny and Autumn's lifelong relationship, from friends to cold and distant frenemies and back, up to and a little after Finny's death.  Their mothers are best friends forever.  Autumn has a mother who periodically goes through dangerous depression.  Her father is distant, both literally and emotionally as he is almost always away on business.  Finny's mother is a single parent.  They have been next-door neighbors for most of Finny and Autumn's life.  If He Had Been With Me is told from Autumn's point of view.

There are a lot of details I don't need to go into but I think the most interesting thing about If He Had Been With Me is the way Autumn changes over the years.  I was a little annoyed that she was beautiful and Finny is the typical blond, athletic, popular character that's so very overused but Autumn is only popular for a while.  Then, she decides she wants to be more of an individual and begins dressing in her own unique style, coloring her hair wildly and often, and hanging out with a different group of people while Finny remains with the popular crowd. Autumn develops a penchant for tiaras, which brings about some interesting scenes.

Finny and Autumn both enter into long-term relationships in high school, Finny with Sylvie and Autumn with another very handsome boy named Jamie.  This is, of course, where sex comes in.  Autumn resists Jamie and eventually sets a time when she'll be willing to sleep with him, which is also interesting in many ways -- and I don't recall any graphic sex scenes.  I thought the sex talk was realistically handled but we're talking as young as 14 or 15.  And, when one of the girls gets pregnant, there's not the panic or trouble that I would anticipate from real life.

However, I really think Laura Nowlin has her pulse on the teen world.  The dialogue, the divisions between different groups, the parties and school days, the worries and plans, young love and break-ups -- most of those seemed totally on-target to me.  I liked the grown-up relationships, as well, and how they affected Finny and Autumn.

If He Had Been With Me is a difficult read because all the way through the book you are both falling in love with Finny and well aware of the fact that he is dead, which sucks.  But, for such a rough storyline, I must admit I was stunned at how completely it sucked me in and would not let go. I was captivated by the relationships, adored Finny, loved Autumn's quirkiness and cared how her story would end.  I actually had two different ideas which way the ending would go and the author used both, which was bizarrely satisfying.

Highly recommended - I absolutely could not put If He Had Been With Me down.  Well-written prose and characters that you can believe in carry the reader through a difficult story of love and death. I was very impressed.  I think If He Had Been With Me would be especially great for discussion in a mother-daughter book group.

One of my favorite recent bird pics: 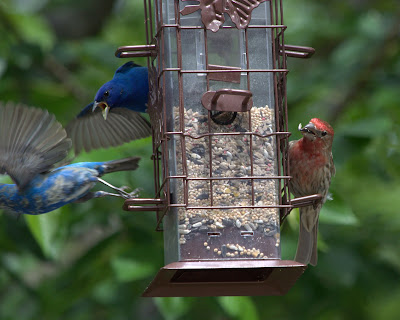 I love how very different the two indigo buntings look -- one so consistently colored and the other speckled with grey.  Kind of a cool action shot, too.  Birds are awfully fun to watch.

©2013 Nancy Horner. All rights reserved. If you are reading this post at a site other than Bookfoolery  or its RSS feed, you are reading a stolen feed. Email bookfoolery@gmail.com for written permission to reproduce text or photos.
Posted by Bookfool at 11:43 AM