A Certain Summer by Patricia Beard 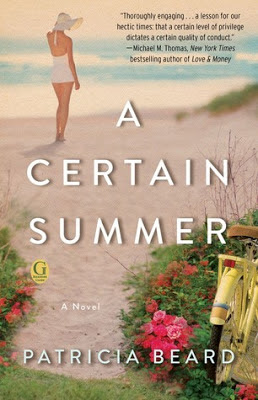 It's 1948 and Helen Wadsworth's husband never returned from the war.  Now, three years after WWII ended, she is ready to find out what happened to her husband and move on.  Is it possible he's still alive?  Arthur has not yet been declared dead, although he's been "missing, presumed dead" since he disappeared during an OSS operation.

Helen and her son, Jack, go to idyllic Wauregan Island to spend the summer.  While there, Helen spends time with Arthur's best friend, Frank Hartman.  Frank was on the mission with Arthur, but he won't talk about it.  Does he have something to hide or is he just unwilling to talk about the horror of war, like many others?

I'm going to revert to the cover blurb, here:

As Helen's affection for Frank grows, so does her guilt, especially when Peter Gavin, a handsome Marine who was brutally tortured by the Japanese and has returned with a faithful war dog, unexpectedly stirs new desires.  With her heart pulled in multiple directions, Helen doesn't know whom to trust--especially when a shocking discovery forever alters her perception of both love and war.

Part mystery, part love story, and part insider's view of a very private world, A Certain Summer resonates in the heart long after the last page is turned.

What I loved about A Certain Summer:

I think by far the most stand-out feature of A Certain Summer is the atmosphere and historical setting.  It was apparent to me that Patricia Beard did some rocking fine research.  There were times when I thought, "Oh, yeah.  I wouldn't have thought about that," about some bit of life in the 40s.  I loved the historical background and how the author brought it into the book.  The setting was almost a character in and of itself, truly authentic.

I also found that I really enjoyed Peter Gavin, a man who was determined to find his way through his painful memories.  I don't know if he was realistically portrayed -- he may have been just a bit too perfect for that, in spite of one violent moment -- but I liked him.

What I disliked about A Certain Summer:

The first thing that bothered me about A Certain Summer was the fact that it's told with a degree of distance that lead me to think, "Show, don't tell!" It took a long time to feel like I knew Helen and I'm not sure I ever fully felt invested in her life.

I used a portion of the cover blurb because, honestly, I disagree with it.  Helen's confused about her place, still wonders about her husband, and definitely has a bit of affection for both men.  But, through some slightly-too-obvious foreshadowing, it becomes clear quite early in the book whose affection Helen will choose.  The shocking discovery, then, is not only not shocking; it's expected.  You know something is up with one of the characters and I found it pretty obvious what the deal was, myself, although I couldn't have guessed at the detail.

The book also ends very abruptly.  I would have liked a bit of wrap-up with the characters who fell in love.

Recommended but not a favorite - The style of storytelling kept me from feeling invested in Helen's life but the research on this book was exceptional.  If you like reading a book for the atmosphere and setting as much as for the storyline, go for it.  I enjoyed A Certain Summer but it was not a book I missed when I had to set it down because I felt too distant from the characters.  Definitely a beachy read, in many ways, but not light and fluffy. 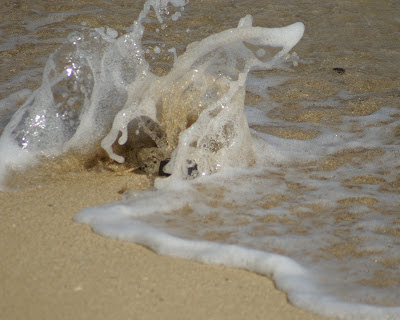