The Cat That God Sent by Jim Kraus (the full review, this time) 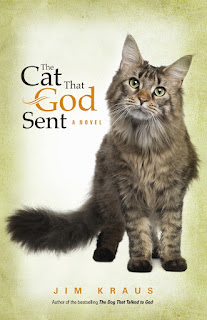 My apologies to the publishing company for the review delay.  It took me a little longer to recover from jetlag than I'm used to.

The Cat That God Sent is about a young minister, a cat, and the people in the minister's new church.  Jake Wilkerson lost his last job because he was having a crisis of faith and when he lost his job he also lost his fiancée.

Now, hired at Church of the Open Door in Coudersport, PA, he is a little nervous but hopeful that the new job will be a turning point in his life and ministry.  But, he's still questioning God.

Petey is a beautiful cat who lived in a bad home and was dumped because his owner thought he'd be safer on his own.  He's roamed for a while and now he's found his own calling. God has sent him to Jake.  Petey doesn't know why Jake needs him but he knows God will find a way to make him useful.

There's also a lonely veterinarian named Emma and a young woman (teenage, as I recall -- it's been a few weeks since I finished the book) who was ditched by her boyfriend.  Forced out of the car, Tassy had little money and only a couple changes of clothing.

Jake happily takes Petey in, when the cat selects him, and when Petey becomes a fixture in church, showing up on the same seat to listen to Jake's sermon's on Sunday, the congregation suddenly wakes up.  New people arrive to see the cat who listens to sermons.  Tassy also shows up and lives nearby.  When Tassy's secret causes Emma to flash back to her horrible past and Jake's crisis peaks, what will happen?

What I loved about The Cat That God Sent:

Petey is intuitive.  He goes where he's needed, when he's needed.  He's a very smart cat and, having had a couple of extremely sharp little kitties, I found it a lot less difficult to buy into his story than some people might.  You can think of him as the magical touch to the story  Obviously, it's a tale with a Christian theme, since it takes place in and near a church, but The Cat That God Sent is so much more than a story about a few people and a preacher in crisis.  It's a sweet story of a group of people who all have their own concerns and secrets and niggling problems with faith or something from the past that haunts them and how the cat and the preacher help everyone find their missing faith as the minister finds his own with outside help.

I actually closed this book with happy tears in my eyes.  It's funny; I wasn't sure I'd like it, at first, and then I simply fell in love.  The Cat That God Sent is a lovely, heartwarming tale I will most likely hang onto for a reread.

What I disliked about The Cat That God Sent:

When I first opened the book, I found a lot of grammatical errors were annoying me and the characters all sounded alike, at least at the beginning.  That's because the author has a bit of a writing quirk.  All of his characters (including Petey the cat) ramble.  Here's a random example:

Does Coudersport have a furniture store?  It is spring.  That means garage sales.  I guess it would be okay for a pastor to look for bargains at a garage sale.

That's a touch of Jake's thought process, not as rambling as many of the interior monologues, as he realizes the parsonage (a small apartment attached to the church for the minister to live in) is not well furnished so he's going to have to buy a few pieces of furniture to make his new home livable.  In that same thought process, he incorrectly uses the word "begat" instead of "beget" (wrong tense), a few sentences later.  The point is, everyone thinks like that. When you're in someone's head, regardless of who it is, that person rambles on, questioning things and answering his own questions.  It's annoying, at first, although the author makes it very clear whose head you're in.  But, as I got into the story, I began to simply not care.  I became accustomed to the style and didn't love it but wasn't bothered by it.

The Cat That God Sent charmed me; I guess that's all there is to it.  And, the further you get into the book, the more the characters become distinguished from one another.  I did have trouble with a few of the church members getting tangled up, but they weren't so prominent that it was a problem and The Cat That God Sent is a book that requires a cast on the large side.  The thoughts of those sitting in the pews are important to the book's underlying theme, about how we can find faith in the strangest of ways but it's still every bit as meaningful as if we'd been hit by a bolt of lightning and stayed faithful ever after.

Highly recommended - The Cat That God Sent is flawed in some ways, with plenty of grammatical errors and a quirk of the author's, making absolutely every character's thoughts ramble, but it's funny and sweet and heartwarming.  You may disagree with how you think Tassy's story should have ended (I don't) and the book is definitely a book with a Christian theme, but it's also a really enjoyable story.  Even some Christians may find it a stretch the way the minister suddenly finds his faith in the end, but I wouldn't warn anyone away from this book because it's just, flat fun.