Dr. Who: Festival of Death by Jonathan Morris with a giveaway (Entries now *CLOSED*) 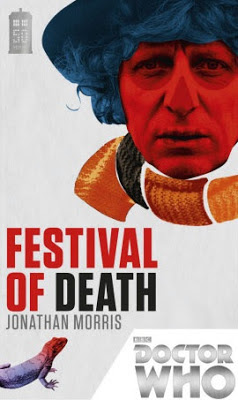 The Fourth Doctor (played in the series by Tom Baker) and his companion Romana arrive by chance in the midst of a place called the G-Lock, a gridlock in a wormhole where a large number of spaceships were trapped 200 years in the past and all the passengers from the cruise ship at the head of the pile-up mysteriously disappeared. Now the G-Lock has been turned into a tourist destination.

As the Doctor and Romana arrive, a disaster has occurred during a thrill-ride called The Beautiful Death, a "tour of the afterlife" in which participants die and are brought back to life.  When the Doctor and Romana are recognized and the Doctor is thanked for saving lives, they have no choice but to go back in time to figure out what they've already done and how the Doctor became a hero.

Then the Doctor discovers that he saved the day by sacrificing his own life.

What I liked about Festival of Death:

Festival of Death is an absolute delight to read.  In this particular Dr. Who novel, the Fourth Doctor is the protagonist.  Tom Baker is by far my favorite of the Doctor Who actors and the author did an exceptional job of portraying him.  It was incredibly easy to visualize the Doctor's every gesture, his tone of voice and his expressions.  And, the story is just complex enough to make the reading ridiculously fun.  There are, in fact, so many different time streams that I lost track of how many Doctors could be running around at any moment.

As Kiddo says, "It's all wibbly-wobbly and timey-wimey."  Well, yes, but in a bigger way than average, I replied.  It really is quite a twisty-turny story.  We both loved that.

There is also an excellent balance of humor (not just the Doctor's cheerful blustering but some terrific secondary characters), scary and gross bits (not too much, but enough to nicely creep you out), adventure and mystery.  Kiddo and I both loved this wacky, time-twisty adventure.

What I disliked about Festival of Death:

There's not much I disliked about Festival of Death.  The gross bits are certainly icky but not so horrifying that I would advise anyone to resist reading the book and there was so much I liked about it that I was practically propelled through it by the desire to see how things would turn out.  Whoosh went the pages!  The only complaints I can come up with are spectacularly mild.  Romana occasionally didn't sound entirely "in character" to me.  But, I haven't seen an old episode with Romana in it for ages, so you can take that possible criticism with a grain of salt.  There is also a computer called ERIC who is annoyingly suicidal.  But, there's a reason for his human-like distress and as you get farther into the book and ERIC's past becomes clear, the annoyance becomes an eyebrow-raiser, instead.  Oh! Poor Eric! How awful! you will think.  Odd siding with a computer but he really was put-upon.

So, what does that leave?  Oh, I suppose no criticism at all.  I don't like gross bits but as I said, there was a very decent balance that kept the icky from becoming overwhelming.  And, K-9 is in this one!  Squeee!  I was heartbroken when K-9 left the series.

Festival of Death is a tale of the Doctor constantly crossing time streams with himself, making for more than one outrageous incident.  Great story.  I would read it again.

[Kiddo is succinct in a way I can only dream of someday becoming.]

Highly Recommended - Excellent characterization, a nice twisty plot, plenty of humor, with some scary and yucky bits (but not too much).  A vastly entertaining adventure with a perfectly-described Fourth Doctor.  Festival of Death is definitely worth buying for multiple rereads if you're a Dr. Who fan.  Even knowing the ending won't ruin it for future readings because it's such fun.  Kiddo and I both loved it and Huzzybuns is glad we're done reading it so he can have a turn.

I gave up doing giveaways, quite some time ago, but I'm going to come out of the anti-giveaway woodwork because I loved this book enough that I think it's worth spreading the joy around.


This is an international giveaway, so no problem if you live in Timbuktu or Constantinople or on Easter Island.  Oklahoma's OK, too.  [inside joke]  Good luck!