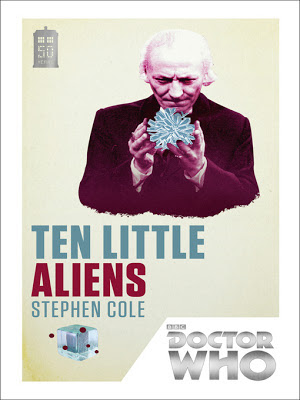 A team of futuristic soldiers land on an asteroid for a training mission and everything goes wrong. They find the bodies of 10 aliens from a mystical group known as the Morpheians (a faction of their enemy, the Schirr) but one by one the bodies disappear.  And, so do the soldiers.  Meanwhile, the Doctor and his assistants, Ben and Polly, show up on the asteroid. The TARDIS is locked by a force field, trapping them, and Polly promptly disappears through an invisible portal.  What in the flying petunias is going on?  Who are the dead aliens and why are they disappearing?  Why are the soldiers being killed?  Did someone on the team of soldiers betray them?   By the time the Doctor and his sidekicks figure out where they're headed and why, it may be too late for everyone.

What I liked about Ten Little Aliens:

The best thing about Ten Little Aliens was the portrayal of the Doctor, Polly and Ben.  They were distinctive characters, well described.  Although I haven't seen more than brief clips of William Hartnell as Dr. Who, I had a clear image of all three characters.  I also liked some of the action, at least at the beginning of the book, with the soldiers.

What I disliked about Ten Little Aliens:

I'm afraid this list is a bit longer.  While I enjoyed the reading, up to a point, I thought the author tried too hard to cram too many ideas into one novel.  The name Ten Little Aliens is based on the early name of an Agatha Christie novel, so he used what he'd learned about Christie's mysteries to create his own mystery.  Then, there's a bit of a space opera aspect with the soldiers, who are much like Starship Troopers.  There's a war between two races, a whole bunch of soldier storylines to explain why they behave the way they do, the magical faction of the alien race, some scary bad angels (I had to wonder if they led to the weeping angel plot) and then . . . as if the whole mess wasn't confusing enough . . . about 2/3 into the book, it suddenly became a Choose Your Own Adventure.  How weird is that?

First of all, I hate Choose Your Own Adventures because I'm a very linear person.  It bothers me just flipping to the back of a magazine to finish an article.  So, I read the CYOA part straight through and skipped all the bits saying, "To read more of Haunt's story, turn to page [whatever]," etc.  Eventually, that bit ended and it reverted to the novel.

However, the worst thing about Ten Little Aliens was the gore.  It is by far the nastiest book I've read in a long time, when it comes to violence and gore -- way, way too graphic and absolutely disgusting.  When I think back on it, I'm really stunned that I kept reading.  If you have a weak stomach, avoid this one.

I'm iffy on recommendation.  I think I'll only recommend it if you don't mind a senselessly complex plot with a stunning amount of gore.  I liked the parts with Dr. Who, Ben and Polly, simply because they were interesting characters.  But, there was so much violence and some truly ghastly scenes.  It will take me a long time to get those images out of my head.  I wish I could take an eraser to my brain.  Still, I finished the book and I thought the writing itself was sharply rendered.  It was just all over the place.  The author tried to meld too many different concepts into one book and, in the end, my general feeling was that it was . . . well, a hot mess.  I gave Ten Little Aliens a 3/5 at Goodreads and I'm concerned that I'm being a little too generous.

My husband is a slow reader and has only made it halfway through Ten Little Aliens, but from about page 40, he's been telling me he's "pretty sure it's going to get better".  He agreed with me that he likes the Dr. Who characters and found the soldier action pretty interesting.  He is intrigued by the convoluted plot.  But, he is not the kind of person who puts up with icky, bloody violence.  I told him about the most graphically revolting part of the novel and he stared at me for a minute.  "So, I think it's probably not for people with weak stomachs," I told him.  He said, "Hmm, I may not want to finish."  He's really appalled by violence -- the kind of guy who won't even watch an action movie with you unless you beg, loud and long.  I think I'll recommend that he just move on to another of the Dr. Who novels.

Believe it or not:

I'm still really looking forward to the rest of the Dr. Who Classic reprints on my stacks.  I've stopped here to read a few other reviews.  Some people love it, some absolutely hate it.  I fall in the middle.  But, the consensus of those who didn't give it a high rating is surprise that it was chosen as the first published in a series of reprints . . . a bad choice, that is, as an introduction to the series.  I tend to agree.  It can only get better from here.  There were definitely things I liked about the book, though.  I might have loved it, in spite of my other minor dislikes, if it hadn't been so gross.

We went to The Who Shop, while we were in London: 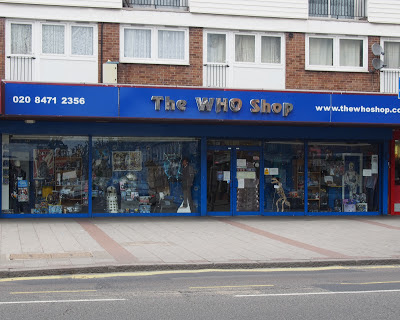 I highly recommend popping into The Who Shop if you're a Dr. Who fan and happen to be in the London area.  There's even a small museum in the store.  You have to get a TARDIS key from the proprietor and walk through the TARDIS doors to get in.  Ridiculously fun.  We had a great time.  While the guys were looking around, the owner taught me how to say Llandudno properly (a Welsh place name).  And, then he forgot to put one of our purchases in the bag and you'd think he'd tried to kill us, he was so apologetic.  Point being: great place, great people, loads of fun, worth a visit.