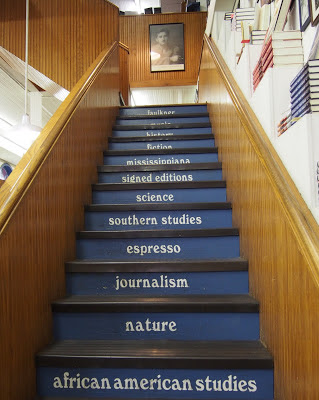 We had a long and tiring weekend in which we drove to Nashville to help our eldest son move (meaning, we took on his junky old furniture, some of which he was supposed to return if he no longer wanted it . . . but we won't go there).  The first night was spent at our "vacation home" - Kiddo's apartment in Oxford, MS.  Of course we went to Square Books and Off-Square Books.  That's the Square Books staircase, above.  I took a picture of a pretty stack of Simon's new title on the new arrivals table: 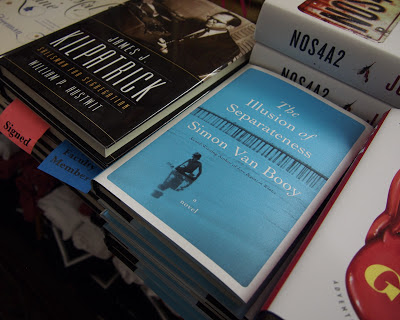 That was Friday night.  On Saturday, all three of us bundled back into the car to drive on to Nashville.  On Sunday, we rented a small moving truck and the guys loaded up the furniture Eldest & DIL no longer wanted.  We drove back to Oxford and spent a second night in our vacation place then drove the rest of the way home, leaving Kiddo behind for the second summer semester at Ole Miss and dumping more than half the furniture on him. He's happy to have finally acquired the "family dresser" - an old 70's Early American-style dresser that's nicely built but pretty ugly.  Still, it's solid wood and you don't see that, anymore.

We stopped at a Farmer's Market in Bolivar, TN, on the way to Nashville. Husband asked me to take a photo of one of the peaches we bought because it was the sooo juicy and delicious.  I took a bite and it dripped on my camera.  Oops. 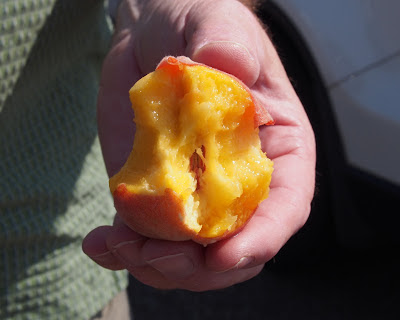 The rest of the peaches have been turned into a delicious peach cobbler.  They sat in the heat a bit too long and were ripening quickly so we decided we'd better use them before it was too late.

I got 3 books, last week, and two more arrived, yesterday.  Normally, the latter two would go on next week's list of arrivals because it's not Monday, but they're sitting here so you might as well see them before I haul them off to sort, right? 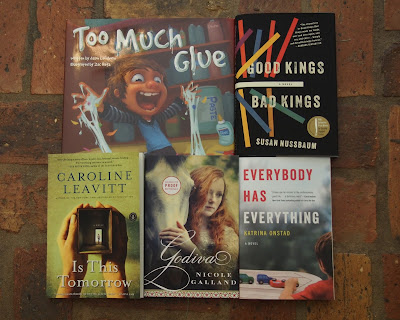 I finished reading Astor Place Vintage by Stephanie Lehmann, over the weekend, and am about halfway through She Rises by Kate Worsley.  I hope to start catching up on my little backlog of reviews, tomorrow.

The cats were cared for by Kiddo's girlfriend, again, so we came home to happy little furballs.  They love C.  She was going to go to her mother's house for the weekend but had no problem altering her plans to care for the kitties.