Perfect Ruin by Lauren DeStefano (Book 1 of The Internment Chronicles) 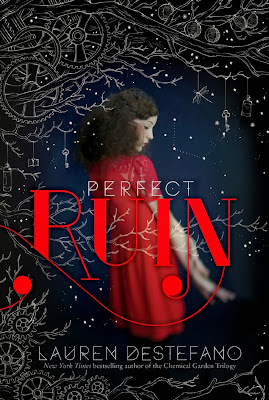 Holy Toledo. I am so freaking far behind you'd think I'd have completely forgotten Perfect Ruin, over a month after I closed it.  But, no.  Lauren DeStefano's memorable latest release starts a new series on a unique world, a floating city called Internment.

Just from the name of the floating city, you can get an idea of what it's like to live there -- a bit like a prison. This island in the sky is ringed by a train track and surrounded by some sort of force field. It's against the law to go past the train tracks and if you try to jump off your little world, you're lucky if you survive at all.  Morgan's brother was a pharmacist before he became a jumper and barely survived, now he's blind and a little bit on the crazy side.

So you've got Morgan, young and betrothed to Basil, living at home with her parents on this tiny little island city in the sky.  Her blind brother and his wife live upstairs.  Her best friend isn't entirely besotted with her own future husband but it's not clear why. Pen is a fabulous character, though. Lauren DeStefano has mentioned that people have written to her, begging her not to kill off Pen. I love that.

The two couples -- Morgan and Basil, Pen and Thomas -- ride the train to school, on dates, shopping, etc., occasionally walking if they feel like skipping the train. Morgan's father is a policeman. Her mother is drugging herself to the gills and sleeping her life away. That's the background, the "normal" in Internment. Then, unsettling things begin to happen: a murder, a fire, the king reassuring everyone that the murderer will be caught.

It's not entirely unexpected that people who can barely see things on Earth below might get a little cranky and feel the urge to escape. After her safety begins to feel threatened, Morgan is totally creeped out. Here she is, stuck and well aware of how damaged you can become when you try to escape, but wanting to get out.  When she meets the young sister of the murder victim and the fellow who is being sought as the murderer, Morgan becomes curious and starts to stay out when she shouldn't, seeking answers. And, when she begins to put the pieces together and bad things start happening to her own family, suddenly escape seems to be the only option. But, is it even possible?

Well, you'll just have to read to find out. There were things I liked about Perfect Ruin and things I didn't but, in general, I loved Perfect Ruin.  It's a quick read that sucked me in.  I cared about the characters and I thought the ending held promise for its sequels.

Highly Recommended - particularly to fans of YA.  I love the idea of a floating island, the characters, the way Lauren DeStefano tugs the reader forward, urgently needing to understand what's happening and why, and I love her writing style. I was less enamored of the scenery as it was described. At the beginning of the novel, I had my own mental image of the architecture on a floating city -- futuristic, shiny and rather beautiful -- and I was quickly disabused of my fanciful architectural notions. I hated to say goodbye to my mental image but it is what it is, this Internment, and I liked the story.  I hope the series holds up.