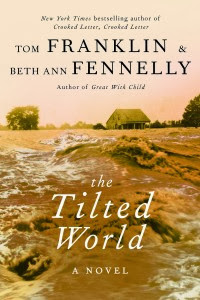 I was pretty sure I was going to fall in love with The Tilted World because I figured the combination of Tom Franklin's writing with his poet-wife Beth Ann Fennelly's softening must be a very fine thing. Add to the beautiful writing a setting that has been under-utilized in fiction, some terrific characters and an uplifting love story and something wondrous was bound to happen.

Sure enough, I was right.  In a nutshell, The Tilted World is about a bootlegger, a federal revenue agent, a baby and a flood.  The Great Mississippi Flood of 1927 (link leads to image search to give you a look at flood photos), a killer flood that is well-known to Mississippians but not as widely known elsewhere, is the backdrop.  It should be better known, though, because the Flood of '27 is not only "the most destructive river flood in the history of the United States" but also the reason a series of levees were built along the Mississippi River, preventing similarly huge death tolls during major floods of recent years.

Dixie Clay thought she was marrying a handsome fur trader who would give her a good life.  But, he turned out to be a con man, a bootlegger and an abuser.  After the loss of her only child, she has slowly lost hope that life will ever improve.

Two federal revenue agents have gone missing and Dixie Clay suspects her husband may have done more than just pay them off.  When two new revenuers are sent to find out what happened and they come across a murder and an orphaned baby, one of the revenuers decides he must find the child a home.  But, with flood waters quickly rising, it's not quite as easy to offload a baby as it might ordinarily be. Solving a mystery, finding a home for a baby and trying to prevent the bombing of a levee would be hard enough, but with the water rising it's a race against time.

There are many elements to The Tilted World. It would be hard to describe everything; and, doing so would wreck the reading, anyway. All you need to know is that the characters are remarkably realistic and the story is gripping. Some of the characters lean toward good or bad and some are dubious but everyone has flaws and the main characters bear the weight of their histories in believable ways. The characterization is outstanding, in other words. The story is even better.  There's bootlegging and murder, loss and redemption, terror and kidnapping, adventure and love. At its heart, the love story is tender and beautiful and, of course, so very unlikely that the mere hope the two characters will get together and form a little family takes your breath away. I found The Tilted World absolutely riveting.

Highly recommended - I wanted to reread The Tilted World the moment I finished it.  I may have to toddle up to Oxford to see if I can find an autographed copy. It's definitely one for the good shelves, a 5-star keeper, in my humble opinion. You will feel liked you're covered in mud and ready for a nice, long soak at some point in the reading; the description is that vivid. Although there are some grueling scenes of death and abuse, The Tilted World is definitely a gentler book than Crooked Letter, Crooked Letter (link to my review). I hope Franklin and Fennelly will write together, again.

©2013 Nancy Horner. All rights reserved. If you are reading this post at a site other than Bookfoolery  or its RSS feed, you are reading a stolen feed. Email bookfoolery@gmail.com for written permission to reproduce text or photos.
Posted by Bookfool at 4:18 PM