Snow on the Tulips by Liz Tolsma 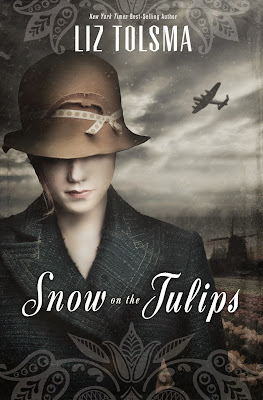 In the winter of 1945, 10 men are lined up and shot by Nazis for their part in the Dutch Resistance.  One of them survives and makes his way to a house nearby, where his wound is dressed and he is turned away.  Still bleeding, Gerrit stumbles to the home of widowed Cornelia and her brother, Johan.  Corrie doesn't know the first thing about how to treat a bullet wound, nor is she certain she can trust the local doctor, so she fetches her sister, Anki, a nurse (which leads to a secondary storyline I won't dive into).

The Nazis have left their victims to die, but when they return to fetch the bodies and discover that one man is missing, Cornelia realizes she has put all of her family in danger.  And, when Gerrit asks her to send a message to his friends in the Resistance, her refusal will mean even more danger for Johan. But, Corrie can't bring herself to send Gerrit away; and, when she starts to feel attached to him, she fears the war will end up taking everyone she loves.

Snow on the Tulips is, at its heart, a Christian romance based on a true event.  There was a real-life Gerrit, a man who was lined up with other Dutch Resistance workers and shot, and a real-life Corrie who nursed him back to health.  But, the true story and WWII are backdrop.  Snow on the Tulips is a story about finding the courage to help others at risk of one's own life, a tale of romance, a story of faith.

Snow on the Tulips was a "liked the idea more than the execution" read, particularly because I found the WWII scenes were often unconvincing.  There were some little oddities that didn't sit well with me.  For example, Johan is a 20-year-old guy who has managed to hide from the Nazis as they've slowly gathered all the men who are fit enough to put to work.  He's spent most of his adult life at war and he is often forced to hide beneath the house.  And, yet, he's silly and impulsive. He often acts more life a 5-year-old having a temper tantrum than a 20-year-old who has spent 25% of his life at war.  When Nazis are regularly raiding houses in his area, he is implausibly halfhearted about staying out of sight and sometimes even noisy and boisterous.  I had a little trouble both tolerating and believing in Johan. I also thought there were a few too many convenient escapes and near misses.

There were, however, a lot of realistically tense scenes and Snow on the Tulips is nicely paced, with clear writing and an excellent flow.  Writing-wise, it's good.  In spite of a little difficulty with suspension of disbelief, the pages flew.  As a WWII book, I  thought the story was weak but it was solid enough that I gave Snow on the Tulips a 3.5/5 rating at Goodreads. I would recommend Snow on the Tulips particularly to fans of romance.

I got my copy of Snow on the Tulips via Litfuse Publicity and they're having a super giveaway. Click on the link in my sidebar to enter to win a copy of the book and a $50 Amazon gift card!