The Radleys by Matt Haig 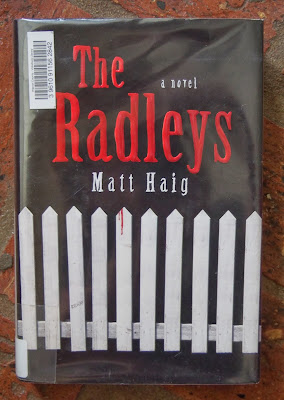 I read To Be a Cat, a children's book by Matt Haig purchased in England, earlier this year, and wanted to give one of his grown-up books a try.  So, when I was perusing the shelves of my local library, I went in search of books by Haig and found The Radleys.

The Radleys appear outwardly common.  A family of four -- two parents and two teenagers -- they live in an average house with an unnoticeable car on quiet village street.  They're a family of abstaining vampires who are boring and normal and, unfortunately for the kids, just a little bit weird. But, problems develop when the daughter of the family decides to go with her conscience and become a vegan. She becomes quite ill until she is threatened and bites someone to protect herself.  When her new-found "blood lust" gets out of hand, Mr. Radley calls his brother out of desperation. And, brother Will Radley is extremely bad news -- irresponsible, careless, driven by his own unquenchable thirst for blood.  When Will begins to influence his niece and remind Mrs. Radley of a time she'd rather forget, what will happen?

"Well, actually, before you go all Gandhi on me, I should tell you there's no such thing as a true vegan.  I mean, do you know how many living things exist on a single potato? Millions. A vegetable is like a microbe metropolis, so you're wiping a whole city out every time you boil a potato.  Think about it.  Each bowl of soup is like a man-made apocalypse."

As a vampire book, The Radleys is unusual, a pleasant departure from the angst-driven teen vampire novel and, in fact, not merely a vampire story but also an allegory about a family trying to conform outwardly while inwardly suppressing their unsavory urges.  The so-called "blood lust" that Will has given in to and the rest of the family tries to avoid probably serves as a parallel to alcoholism (drug addiction, any other addiction would also probably fit).  Like an alcoholic who doesn't even try to control his overwhelming urge to drink, Will is so casual about murdering innocents and so unwilling to think of killing as bad that he leaves a trail of victims, wherever he goes.  Will is staunchly opposed to self-control and bored by normality.

As he drives into the place, Will absorbs the sights the main street has to offer.  A purple-painted children's shoe shop called Tinkerbell's. A tired-looking pub and a polite little deli.  A sex shop?  No. A fancy-dress place for self-hating unbloods who think a night in an afro wig and glittered flares will alleviate the pain of their existence. And a drugstore, as a plan B. Even with a token hoodie walking his cowering psychodog, everything has a suffocating coziness about it, an air of life lived at the lowest possible volume.

Matt Haig's writing is intelligent, clever, sometimes quite funny.  Toward the end of the book, I'd grown a bit weary of the story and was just ready for it to end, but I enjoyed The Radleys and still want to read everything Matt Haig has written.  That may take me a while.

Recommended - You don't have to be a fan of vampires to appreciate The Radleys.  Solid storytelling, witty writing, great characterization, believable emotion and surprisingly depth make The Radleys a very good book, overall.  It probably could have stood just a touch more editing down to size.  I did become weary of Will and just wanted the Radley family to find their new normal and get that rotten character out of their lives, toward the end, but while not a perfect book The Radleys is a very good one.

©2013 Nancy Horner. All rights reserved. If you are reading this post at a site other than Bookfoolery  or its RSS feed, you are reading a stolen feed. Email bookfoolery@gmail.com for written permission to reproduce text or photos.
Posted by Bookfool at 6:19 PM