The Prodigal: A Ragamuffin Story by Brennan Manning and Greg Garrett 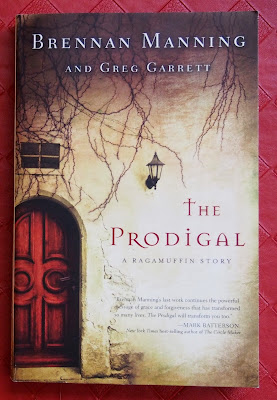 I couldn't find an image that really showed the beautiful cover of The Prodigal: A Ragamuffin Story, so I snapped my own.  Isn't the cover pretty?

The Prodigal is a modern retelling of the Biblical story "The Prodigal Son".  Jack Chisolm is a television evangelist based in Seattle.  Known as "the people's preacher," Jack has grown a following based on the theme "We have got to do better."

When Jack makes a very public mistake and his fall from grace is publicized nationally, the church asks him to apologize.  Instead, Jack refuses to say he's sorry or even acknowledge that he has done wrong. In response, Jack is sent packing.  His wife is paid a large sum to keep quiet and disappears with their only child while Jack returns to Mexico, where his error in judgment occurred, to drink himself into oblivion, locking himself into his hotel room. Jack has hit bottom and doesn't know where to turn when his father arrives to take him home to Texas.

Jack has not been home in ten years and has refused to take his father or sister's calls after a public embarrassment, so he's surprised to find his father willing to take him back in, scandal and all.  As Jack begins to recover from his darkest hour and ponders where he's gone wrong, he works in his father's hardware store and tries to quietly help out local people in need.  But, his notoriety follows him and there are many hurts that need to be addressed before he can move on with his life.

The central issue in The Prodigal is the same as that of the parable, a lesson that God's grace is there for us, no matter how badly we've failed, something that applies to anyone and everyone and which was apparently the common denominator in Brennan Manning's books (I've read only The Ragamuffin Gospel and it's been quite a while).

Recommended, particularly to Christian readers of all stripes. The combination of solid storytelling, a great theme and Greg Garrett's breezy writing style make The Prodigal a nice, light read with a purpose.  Jack's stubborn refusal to admit he's done anything wrong is patterned after that of Lance Armstrong but Jack is quite different.  The fictional Jack Chisolm is a man of faith and it doesn't take him a long time to realize he's made mistakes that have hurt a lot of people.  The big struggle for Jack is in accepting that he can still be forgiven and turn a hard lesson into something meaningful. He's helped along by Father Frank, a man who has himself lived through a dark time and learned from his mistakes.  I loved the fact that Jack doesn't get off the hook completely. Not everyone is willing to forgive and forget.  But, like the Biblical lesson, his father is willing to let go of past hurts and accept him as he is.  Lovely.

You can read all about the collaboration between the two authors in the interview, here:

"The Prodigal" and Brennan Manning: An Interview with Greg Garrett