Before I Die by Candy Chang 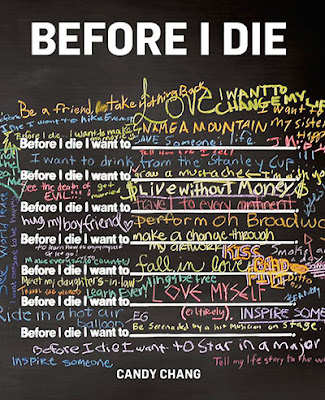 Still backtracking to catch up on October and November books.  Before I Die by Candy Chang is a small, coffee-table type book about the author's idea to create a wall covered with the unfinished sentence, "Before I die I want to ______," stenciled repeatedly to enable people to fill in their answers.

The first place a "Before I Die" wall was created was on the side of an abandoned house in New Orleans.  It took some special planning and permission and there were a few hang-ups, but eventually Chang managed to paint the wall. The reaction was surprising. People stopped to think, wrote their answers and talked to each other.  There were problems, of course -- chalk stolen, bad language that had to be cleaned off, walls that became so full they had to be hosed down to give even more people an opportunity to write on them.  But, that first wall was a successful, thought-provoking venture and soon similar walls went up in other cities and gradually the idea spread around the world.

Before I Die tells about the walls, where they were built, the people who made them, and the sentiments written on the walls. There are photos of people writing on walls and the people involved, as well as some little boxes with quotes from the walls.

I really enjoyed Before I Die, although there were two things I thought were mildly lacking. I would have liked to see larger, unblocked photos of the walls so that one could sit and read a wall without bodies marring the view (although it is definitely fun to see photos of people writing) and without straining the eyeballs.  Some of the photos are a bit hard to read. You can see some photos of the walls a bit better via a Google image search of Before I Die, though. The other thing I would have liked is to know more about the author's personal story.  I didn't quite understand what loss set the project in motion. I actually reread Chang's intro a couple of times, trying to figure that out, and came out of it thinking the author lost her mother.  I'm not entirely certain, though.

One thing I particularly loved about Before I Die was the fact that as I was reading I realized there were a lot of life wishes that other people wrote on those walls which I've already experienced. What a tremendously uplifting realization. Some of the sentiments are not bucket list wishes, though, but simple things. You can see a few of those in the photo above:  "Inspire someone," and "Hug my boyfriend," for example.

As I was reading Before I Die, I mentally categorized.  You can't help but notice a lot of repetition from one wall to the next and the author actually did some analysis/sorting of similar thoughts.  Math freaks get their charts and graphs!  Cool!

Recommended - I don't own a coffee table (never have, actually) so I have no place to set out a coffee table book but I do think the book is thought-provoking enough that it would make a fun book to set out in the hope of stimulating conversation.

©2013 Nancy Horner. All rights reserved. If you are reading this post at a site other than Bookfoolery  or its RSS feed, you are reading a stolen feed. Email bookfoolery@gmail.com for written permission to reproduce text or photos.
Posted by Bookfool at 7:31 AM