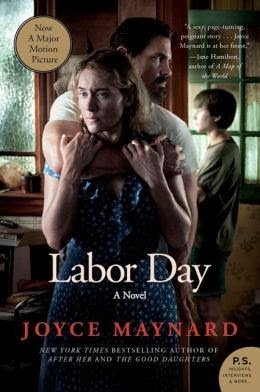 In Labor Day by Joyce Maynard, an escaped prisoner asks a boy if he and his mother (who are shopping in a grocery store) will take him home with them.  It's clear that he's injured and something is not quite right about him, yet 13-year-old Henry's depressed and agoraphobic mother, Adele, agrees to take Frank home with her and her son.  During the next 6 days, which encompass the Labor Day weekend, Frank boosts Henry's confidence, teaches the two of them how to bake a perfect peach pie and lifts Adele from serious depression. 30 years later, Henry reflects on this pivotal weekend in his young life and how Frank made a lasting impact on his family.

I took Labor Day along with me to Oklahoma and gobbled it down in a few hours.  It's told from the viewpoint of a 13-year-old boy so it fits the "coming of age" mold, something I usually dislike because there tends to be a lot of focus on sex, which frankly bores me.  In this case, however, the pages absolutely flew.  Adele's dysfunctions are oddly fascinating and relatable: a woman has become so crippled by depression that her son has to do most of the shopping and she almost never goes out at all, a boy who is clearly struggling with his mother's issues as well as his own self-confidence, and a strangely magnetic murderer.  It is both the uniqueness of the characters and the way one person makes such a huge impact in such a short time that make Labor Day such a compelling read.

There was definitely a lot of sex talk.  But, it didn't matter.  I was fascinated by Frank.  I wanted to know what he did wrong in the past and why he was such a surprisingly steady, trustworthy guy.  He was a murderer, after all.  I also wanted to know what was going to happen.  When you start reading the book, you can't help but think, "This is not going to end well."  And, yet Labor Day is a stunningly uplifting read.

Highly recommended - Fascinating characters and an unexpectedly uplifting ending are the two most outstanding features of Labor Day.  I'm not typically a person who goes rushing out to see movies based on novels but I'm curious how this story will be handled so I may end up seeing if I can drag a friend to the theater for this one.  Labor Day is my first read by Joyce Maynard and it definitely will not be my last.

©2013 Nancy Horner. All rights reserved. If you are reading this post at a site other than Bookfoolery  or its RSS feed, you are reading a stolen feed. Email bookfoolery@gmail.com for written permission to reproduce text or photos.
Posted by Bookfool at 6:49 PM