The Clockwork Scarab by Colleen Gleason 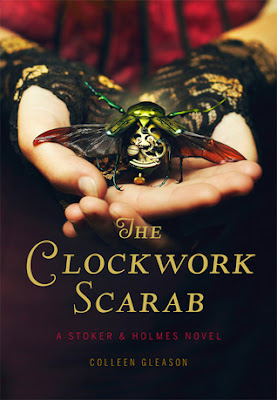 Is that a gorgeous cover, or what?

The Clockwork Scarab is the first in a new Young Adult Steampunk series by Colleen Gleason known as the "Stoker and Holmes" series. Evaline Stoker is author Bram Stoker's little sister and Mina Holmes is the niece of Sherlock Holmes.  The two young ladies are asked to investigate when a girl their age turns up dead and another goes missing.  A scarab is the factor in common at each site.

Since The Clockwork Scarab was my first foray into the bizarre alternate reality known as Steampunk, I have to admit I had a terrible time just getting used to the idea of a world in which electricity is outlawed and all sorts of crazy gadgets are run by steam.  Next to thwart my efforts was the fact that Evaline Stoker is not only the sister of a real-life author but also counts Victoria Gardella, a fictional vampire hunter created by Gleason, as her ancestor.  And, then, of course Mina is the niece of a fictional character. It all makes one's head spin a bit.

As the misses Stoker and Holmes begin their investigation, something entirely unexpected turns up: a time traveler, who mentions that electricity was never really outlawed . . . not in his world, anyway.  He is also puzzled by the fact that one of the two young ladies is related to a fictional character.

Lordy. Seriously, there was a bit too much adjustment necessary for the reading of The Clockwork Scarab.  Eventually, though, I got used to the many oddities of the book and began to enjoy the storyline.  Right away, the misses Stoker and Holmes discover a shadowy society of young women led by a person of indeterminate gender who is seeking to resurrect an Egyptian goddess.

I won't tell you any more about the story but basically you have two girls investigating the deaths of their peers, a time-traveler from just a couple years beyond contemporary time and a secret society.  Mina has been taught well by Uncle Sherlock and it's quite fun to read her observations but Evaline threw me a bit.  She has the skills and strength of her ancestor but there aren't any vampires around.  The Gardellas have nicely nipped that little problem in the bud.  So, she's basically a Victoria Gardella-alike who wears split skirts and tucks sharp objects in various hidden places on her person but her part in the investigation boils down to knowledge of society girls, chasing down clues dropped by a shifty character who may or may not be Cockney and beating up on bad guys when necessary.

While The Clockwork Scarab didn't work for me and I felt iffy about recommending it (see my original thoughts, below), Colleen shared a very upbeat letter about her latest book on Facebook and I asked if I could post it, here, to give you an opposing viewpoint:

"Hi Colleen! Merry Christmas! I just wanted to share with you the difference you have made in my daughter's life. [She] has always hated reading, which is hard for me to understand since I have always loved it. (As the daughter of a librarian and working as an editor/proofreader for 16 years, it comes with the territory!)

"I have always thought that if I could just find something that [my daughter] would enjoy reading, it would open her eyes to all the places reading could take her. Well, we found that in your book, The Clockwork Scarab. She loves it! She told me that she was up til 5:00 this morning, reading, because she just couldn't put it down! That's a first!! Keep up the awesome work, [she] needs more reading material!"

Iffy on recommendation - I had trouble getting into The Clockwork Scarab. Although eventually I did feel like it picked up a bit and I became accustomed to a world of steam-powered funky gadgets and the strange assortment of characters, there was still a mind-bending aspect -- too much going on, too bizarre the way those elements were placed together.  At Goodreads, I gave it an average 3-star rating.

I was a big fan of the Victoria Gardella Vampire series so I chose to hang in there; but, the story was, unfortunately, also not wrapped up enough to suit me and that is the main reason I don't feel comfortable heartily recommending The Clockwork Scarab.  I'm okay with series books as long as they leave you with some sense of completion. The Victoria Gardella books were wrapped up well.  Hopefully, this is a one-off, the way the book ended up teasing the reader without providing a sense of completion.