Mini Reviews - Jack Absolute by C.C. Humphreys, The Paris Architect by C. Belfoure and At the Bottom of Everything by B. Dolnick

I'm going to go with mini reviews for my last few reads, post a Christmas photo or two and then take off for the holidays. 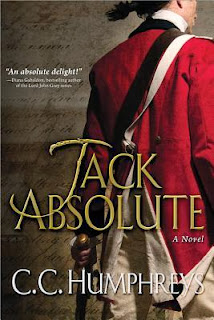 Jack Absolute by C. C. Murphy tells the tale of swashbuckling hero Jack Absolute. a dashing former soldier in England's 16th Light Dragoons who returns to London on business as he works to restore his family's fortune. While in town in the year 1777, Jack discovers that his friend Richard Sheridan has told Jack's story in a play called The Rivals.  He's a taken aback but becomes accustomed to seeing himself portrayed on the stage.

However, hanging around pretty actresses can end up being a problem.  When Jack becomes entangled in a dangerous liaison and is challenged to an illegal duel, he must run from authorities; and, the quickest way out of England is to return to the service as a spy on the British side in the American Revolution, although he has mixed feelings about the job.

With the help of his best friend Até, a Shakespeare-quoting Mohawk, Jack braves the dangerous world of the American Colonies, where it's difficult to tell which soldiers are still faithful to the crown, who supports the rebels and who is involved in the shadowy Illuminati organization whose intent is to foment anarchy in the hope of taking over the Colonies.

I had trouble getting into Jack Absolute, at first (probably just a mood thing) but this month's attempt was my second and it just clicked, this time around.  There is a lot of violence, of course, since the book is set during a revolution. But, the focus is mostly on action, romance and untangling the mystery of the Illuminati.  I was particularly fond of the fact that the author fictionalized genuine historical characters and placed them in the right place at the right time.

Recommended: I'm looking forward to reading the prequel: The Blooding of Jack Absolute. 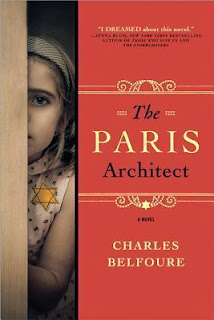 The Paris Architect by Charles Belfoure is the story of an architect living in occupied Paris in 1942.  When he's offered a hefty fee to create a safe place for a Jew to hide, Lucien Bernard is wary.  He doesn't want to be thought of as a collaborator and fears what the Gestapo may do to him, should he be caught.  But, the money, the accompanying offer to design a factory, as well, and the creative challenge sway him.  Lucien likes living well. Soon the money begins to run low and he continues to accept dangerous commissions.

When one of Lucien's designs is discovered during the hunt for a fabulously wealthy Jew, another of his designs fails and a Jewish boy in hiding becomes a part of Lucien's life, his work becomes more personal. Will Lucien's work be discovered before the Americans come to save occupied France?

Recommended with mild hesitation - I liked The Paris Architect because it's a good story, the dialogue is believable and the viewpoint is unusual for a WWII story.  But, I had a big problem with Lucien. He is not a nice man.  Although he gradually begins to understand the plight of Jews and his heart softens, even well into the book his true character shows.  On page 322 he is still irrationally vindictive. When a fellow architect who had more jobs before the war but is now nearing starvation asks Lucien to help him find a job, Lucien refuses:

Lucien thoroughly enjoyed rubbing salt into this wound, and he found himself pleased that Devereaux was so desperate.

That's within 50 pages of the book's ending, so you can see why it would be difficult to think of Lucien as the kind of hero you can really root for. 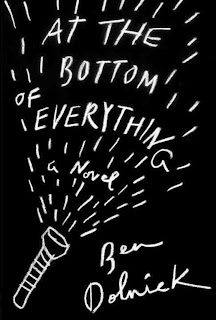 At the Bottom of Everything by Ben Dolnick is about a friendship, a tragedy and how the ripples created by that tragedy affect two young men in different ways, as the years go by.

I read At the Bottom of Everything over the weekend. It's a quick read and I love the reflective writing style:

It's always unsettling, seeing people you've almost but not quite forgotten about--not because they've changed [...] but because they've gone on existing, finding jobs and making friends and moving apartments, all without the help of your thinking about them.

There's a moment just after breaking something (the glass slips from your fingertips, your elbow catches the vase) in which it feels like if you stand there, absolutely still, baring your teeth, you should be able to suck time backward like an indrawn breath.  Your hand hangs there in the air, your eyes fall shut, you're like someone playing a children's game with a whistle and a voice that shouts, "Freeze!"

I think travel must have made more sense, psychologically, in the era of ocean voyages; in the three months it took to get from America to India you would've realized the extremity of what you were doing; you would have stepped off the boat knowing exactly how far you were from your old life.  But I, sitting in a plastic lawn chair on the rooftop, gazing out through the smog at what seemed to be the dome of a mosque, still had a receipt from the Bethesda Row CVS in the front pocket of my jeans.

Recommended with a warning - I enjoyed At the Bottom of Everything but it has one of those horrid open endings that make you flip back and forth, wondering if the publisher misplaced the chapter that wrapped everything up.  As I've mentioned in the past, I help myself out with such endings by mentally creating my own. So, I came away from At the Bottom of Everything satisfied after that initial, "What the hell?" feeling passed.  Apart from the lack of conclusion, I really enjoyed the book.  It's sad and felt a little familiar (like I'd read something so similar the book was almost an echo) but I liked the author's writing style.