A Hundred Summers by Beatriz Williams 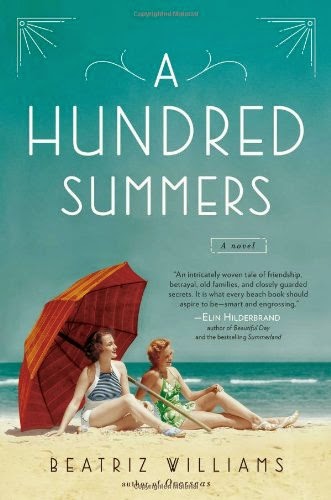 In 1932, Lily Dane fell in love.  After a drive to see her best friend Budgie's boyfriend play football, Lily met Nick Greenwald.  The attraction was immediate and Budgie's response was a derogatory comment about Nick's Jewishness. Not that Budgie really cared what Lily did. Budgie was determined to marry a man of means and she believed she had found that man.

In 1938, Lily is reflecting back upon the glorious time when she was young and in love, courted by Nick. The market crash had destroyed many people and their businesses, others hunkered down and survived. But, life at the beach is the same as it's always been. In recent years Lily has cared for her little surprise sister, Kiki. She knows Budgie has married Nick but little about their marriage, only that tragedy tore Lily and Nick apart and they never managed to come together, again.

As the summer of 1938 winds on, the women at the club try to protect Lily by giving Nick and Budgie the cold shoulder.  Only little Kiki is captivated by Nick. They can often be found walking along the beach, building sand castles.  Through Kiki, Lily finds herself able to talk to Nick, at times, if only briefly.

What happened to end their relationship when Lily and Nick were on the verge of eloping? Why did Nick escape to Europe? What kind of person is Budgie?  Is she really a friend?  And, what will happen when an unexpected hurricane crashes to shore at Seaview Neck?  Will the summer people survive?

A Hundred Summers is my first read by  Beatriz Williams and it won't be my last.  I thought the pacing and the shifts back and forth in time were handled brilliantly. There was enough intrigue to keep hanging on, both to find out what happened between Lily and Nick and to discover if there was another man for Lily.  Or, was Budgie up to something?  Questions, questions.  I actually think A Hundred Summers would made a pretty terrific discussion book --- and/or definitely a great vacation read. The book is not so much scandalous as romantic and a little mysterious but scandal enters in here or there. The writing has an easy flow and I found the dialogue comfortably truthful.  There were moments I caught words I hadn't heard in a couple decades, which indicted to me that the author did her research.

Highly Recommended - A fairly light book that appears to be pretty solid in its descriptions from the time period, great for a beachy, vacationy read. It's a relaxing read that doesn't require too much brain power but it's still engaging and A Hundred Summers is not just a fluff piece. It's quite an enjoyable, well-researched historical story.  I loved the reading.  I felt swept away.


©2014 Nancy Horner. All rights reserved. If you are reading this post at a site other than Bookfoolery  or its RSS feed, you are reading a stolen feed. Email bookfoolery@gmail.com for written permission to reproduce text or photos.
Posted by Bookfool at 12:21 AM