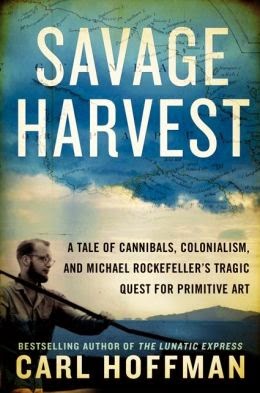 Asmat was otherworldly. Compelling. A strange and fecund universe utterly removed from the grip of the world.  The jungle was thick, but the rivers were highways, and they kept it from feeling cloying, oppressive. It was a drowned Eden, full of birds and fish and freshwater and a giant sky that was always in motion. We passed villages you could smell before you got to them, smoke and laughing children's voices and canoes drawn up on muddy banks.  Dugouts lined with standing men paddled by, smoke rising from the coal in the stern.

~p. 52 of Savage Harvest (Advance Reader's Copy - some changes may have been made to the final print version)

Savage Harvest: A Tale of Cannibals, Colonialism, and Michael Rockefeller's Tragic Quest for Primitive Art by Carl Hoffman is about the author's investigation into how and why the 23-year-old child of one of America's wealthiest and best known families disappeared in the Asmat region of New Guinea in 1961.

The first two chapters read like a novel describing what the author believes happened to Michael Rockefeller, as it occurred, on the day in 1961 when he disappeared. You'll know soon enough if you open the book so I don't consider it a spoiler to tell you that Hoffman believes the young Rockefeller was killed and eaten by cannibals. If you're weak of stomach, you may want to skim the description of his death.

After those first two chapters, the author fast-forwards to 2012 and begins describing his journey to the Asmat region and how and why he went about seeking answers to the 50-year-old mystery.

I'd been thinking a lot about my obsession with what I'd called the primitive, the thing that had driven me to Asmat and Michael's story in the first place. Part of it was simple romance--the romance of the jungle and open fires, of drumming and spears and bows and arrows and dogs' teeth necklaces. But it was also the hope of seeing something, understanding something in my own life, a yearning [. . . ]

The book describes not only his journey into Asmat to seek answers and the journeys of Rockefeller himself, but also the people and the culture he encountered, the history of the region and its people, early interaction by missionaries and Dutch authorities with the Asmat people when they were still warring and cannabilistic, how and why the known facts about Michael Rockefeller's disappearance were hidden from the Rockefeller family, and detailed descriptions of the violent acts that led up to Michael's death.

Savage Harvest is a fascinating book and I found Carl's theory plausible, his research stellar. I also enjoyed learning about Asmat, a place I'd never even heard of.  The ARC unfortunately lacked any maps, as they often do, but I asked Carl if there would be maps in the finished print copy and he replied, "Yes -- both endpapers. Important!"

The maps are definitely critical. I used Google Earth as much as humanly possible but the portion of New Guinea described is not well covered so I'm going to be watching for a finished copy of Savage Harvest, even though I've already finished the book.  I'd like to get a better grip on the locations I just read about.

Highly Recommended with a note that there are some disturbing scenes. Excellent research, strong writing, convincing theory . . . I thought Savage Harvest was an exceptional and utterly absorbing read. There are bloody portions (the way cannibals dismembered a body is described in detail and the violence between villages is well described) and some creeping critter descriptions that made my skin crawl but surprisingly, they didn't bother me all that much, even though I'm prone to nightmares. I was so completely engrossed that the pages kept flying. The author goes to great lengths to understand a culture that's hard to even fathom, one in which the taboo of eating each other was not just about murder and revenge but about long-held spiritual beliefs.

Seriously. Captivating. Also, the book has plenty of photos so readers get a glimpse of Michael Rockefeller during his trips to Asmat, the native people and the primitive art Rockefeller spent his time buying for the Primitive Art exhibit at the Metropolitan Museum of Art.

Just don't read this book while you're eating. There are moments you might choke on your salad a bit if you do.

Many thanks to Carl for contacting me about reviewing Savage Harvest and to William Morrow for providing a copy.  I enjoyed The Lunatic Express and jumped at the chance to read his latest release. I can't wait to see what he comes up with, next.

©2014 Nancy Horner. All rights reserved. If you are reading this post at a site other than Bookfoolery  or its RSS feed, you are reading a stolen feed. Email bookfoolery@gmail.com for written permission to reproduce text or photos.
Posted by Bookfool at 4:37 PM