Anton and Cecil: Cats at Sea by Lisa and Valerie Martin 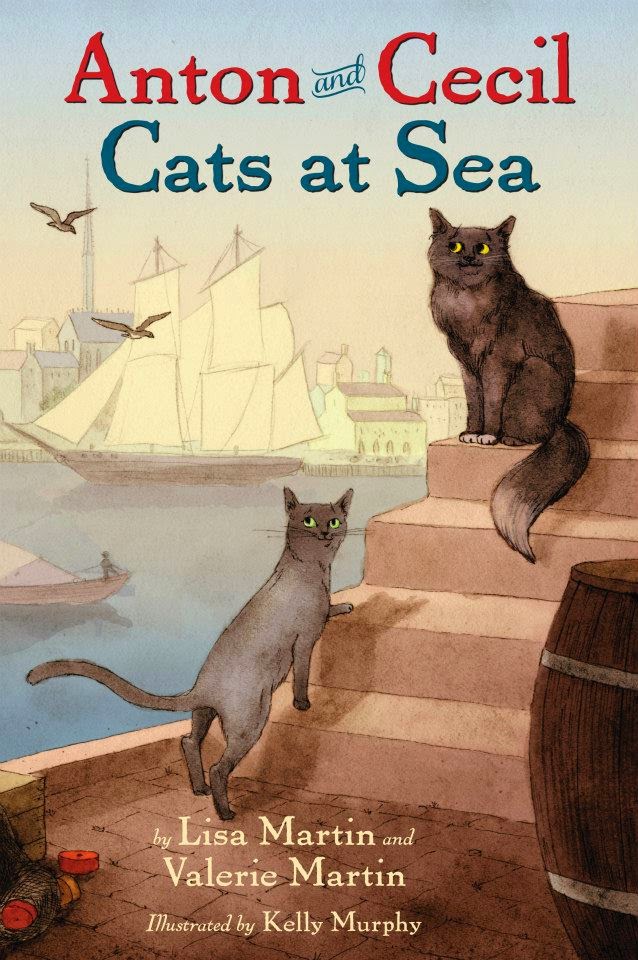 What a poorly designed bird, Anton thought as he crept toward the water, keeping his head down. His instinct proved a sound one, for there were flat rocks in the burbling water of the stream, which made it easy to scamper to the other side, where a grove of real trees with limbs promised both shade and shelter. The bird had evidently given up for now.

You can see from looking at the cover why I specifically asked to review Anton and Cecil. Cat book!!!  When Algonquin launched its Young Reader imprint, I was hoping they'd send me the first new titles off the press, which included Anton and Cecil -- and they may have, but the launch occurred during the time when parcels were disappearing at our new location (one book was taken right out of the envelope, the envelope badly re-taped and sent on with the other book intact). That problem was eventually resolved, thank goodness, so when I was recently contacted by an Algonquin rep about a memoir, I asked if it would be possible to get my mitts on a few books I'd missed the fun of reviewing during our mail crisis. I so appreciate the kind response. My thanks to Algonquin for providing a copy of Anton and Cecil!

Anton and Cecil live in a lighthouse with their mother. They're siblings, although Anton is sleek and gray, Cecil fluffy and black and their personalities every bit as different as their looks. While their mother continues to bear new rounds of siblings, Anton and Cecil like to explore, occasionally stealing fish from the sailors. Cecil is the more adventurous of the two cats, taking daily trips with the day fishermen while avoiding the ships that go to sea for longer stretches, sometimes never to return. Anton loves listening to sea shanties at the local inn. Both are careful to avoid the port at night, when cats have been known to disappear.

Then, one evening, Anton is snatched up to be used as a mouser on one of the ships. When Cecil realizes his brother is missing, he investigates and then takes to the high seas, as well, determined to find Anton.  He has no idea the sea is so immense.  Will Cecil be able to find his brother? What will become of Anton, who dislikes the taste of mice and rats?

I was hoping Anton and Cecil: Cats at Sea would be the kind of adventurous cat tale I sought out as a youngster and found the story contained all the elements I loved. The book alternates between Anton and Cecil's viewpoints, both of them experience danger and adventure, both develop surprising friendships, both come up with clever solutions when they're in a tight spot, plus the brotherly relationship is well-described: they argue but they love each other.  Perfect.

Highly recommended:  An exceptionally well-plotted, quick-moving adventure that is great for cat lovers of all ages. I probably would have read this book around the age or 8 or 9. It would also be terrific to read to younger children. Although there are frightening moments when the cats are kicked, locked up, stranded on an island, taken to be sold or in other ways threatened, everything works out in the end and the brothers are happily reunited. My only complaint about the book is the use of "fo'c'sle"written phonetically rather than spelled out "forecastle" on p. 167, a minor complaint but I do think it's best to write the actual word rather than focusing on the pronunciation when writing for the younger crowd.

©2014 Nancy Horner. All rights reserved. If you are reading this post at a site other than Bookfoolery  or its RSS feed, you are reading a stolen feed. Email bookfoolery@gmail.com for written permission to reproduce text or photos.
Posted by Bookfool at 11:05 AM