Monday Malarkey - About 3 weeks' worth of malarkey

I have a great deal of catching-up to do because I went here: 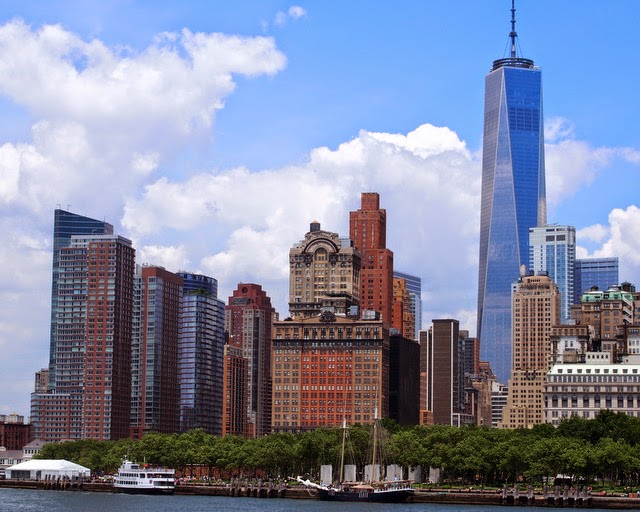 New York to attend a writing workshop led by my delightful friend, Simon Van Booy, and New Jersey to visit son and daughter-in-law. And, apparently, also to bond with my grand-dog, with whom I spent a startling amount of time reading on a breezy porch. Between the trips to NJ/NY and dealing with the house sale (on-again, off-again, on-again, ugh -- it's enough to make a girl a little crazy), I can't say I managed to round up absolutely every book that arrived (and, in retrospect, it seems I actually photographed at least two that I've already mentioned). I'm just going to call it close enough and move on from here.

Recent arrivals/purchases in several photos (and in no order, whatsoever): 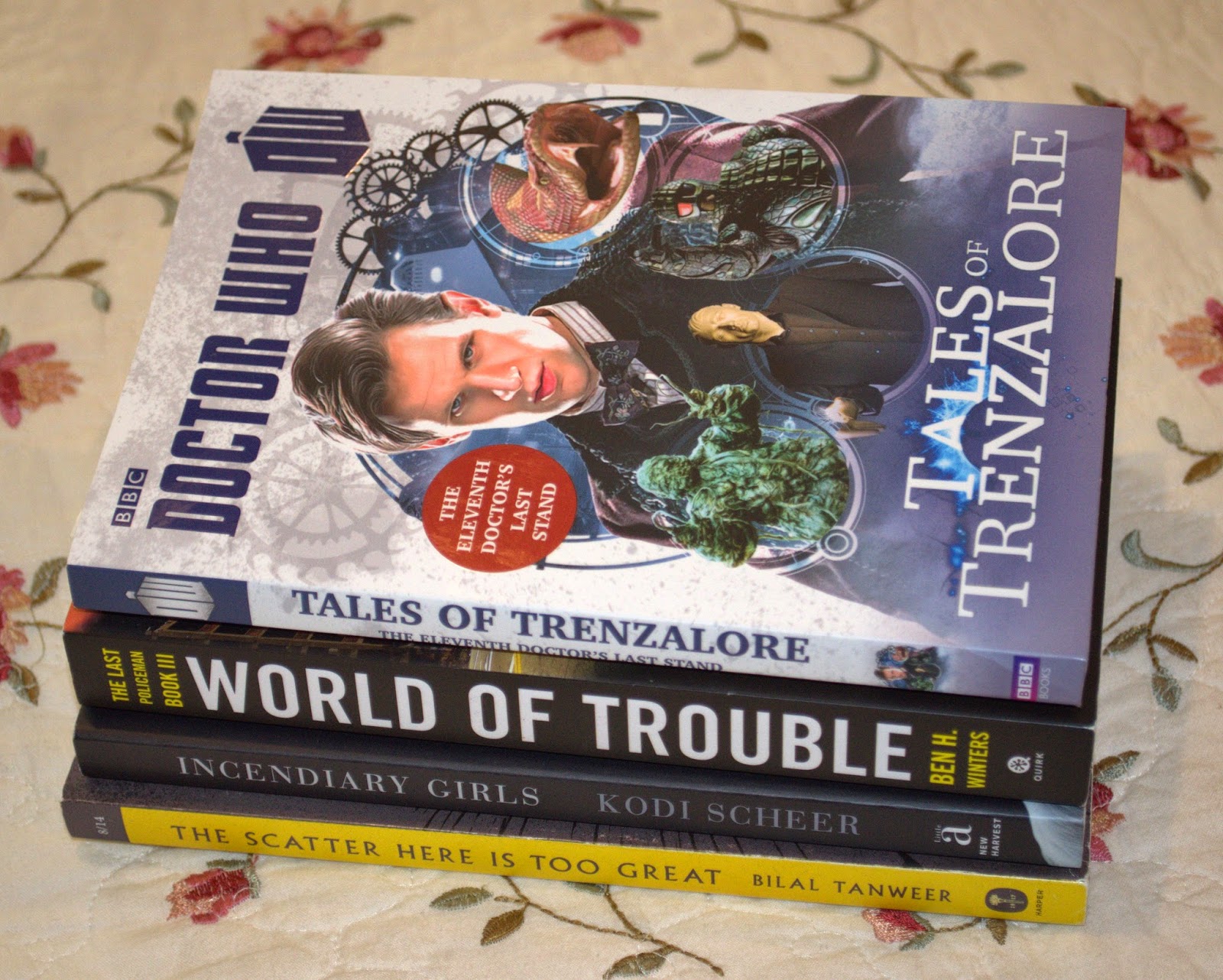 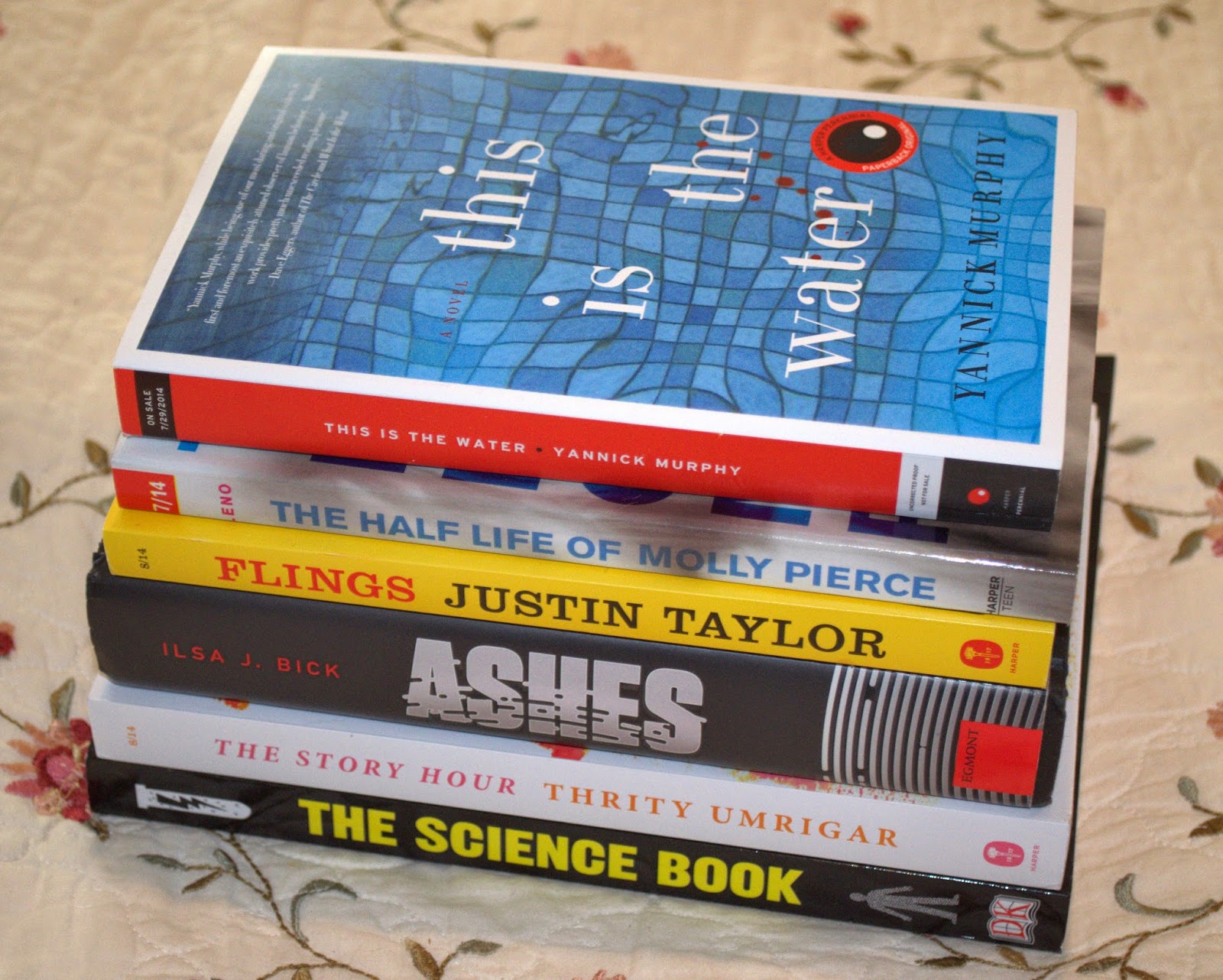 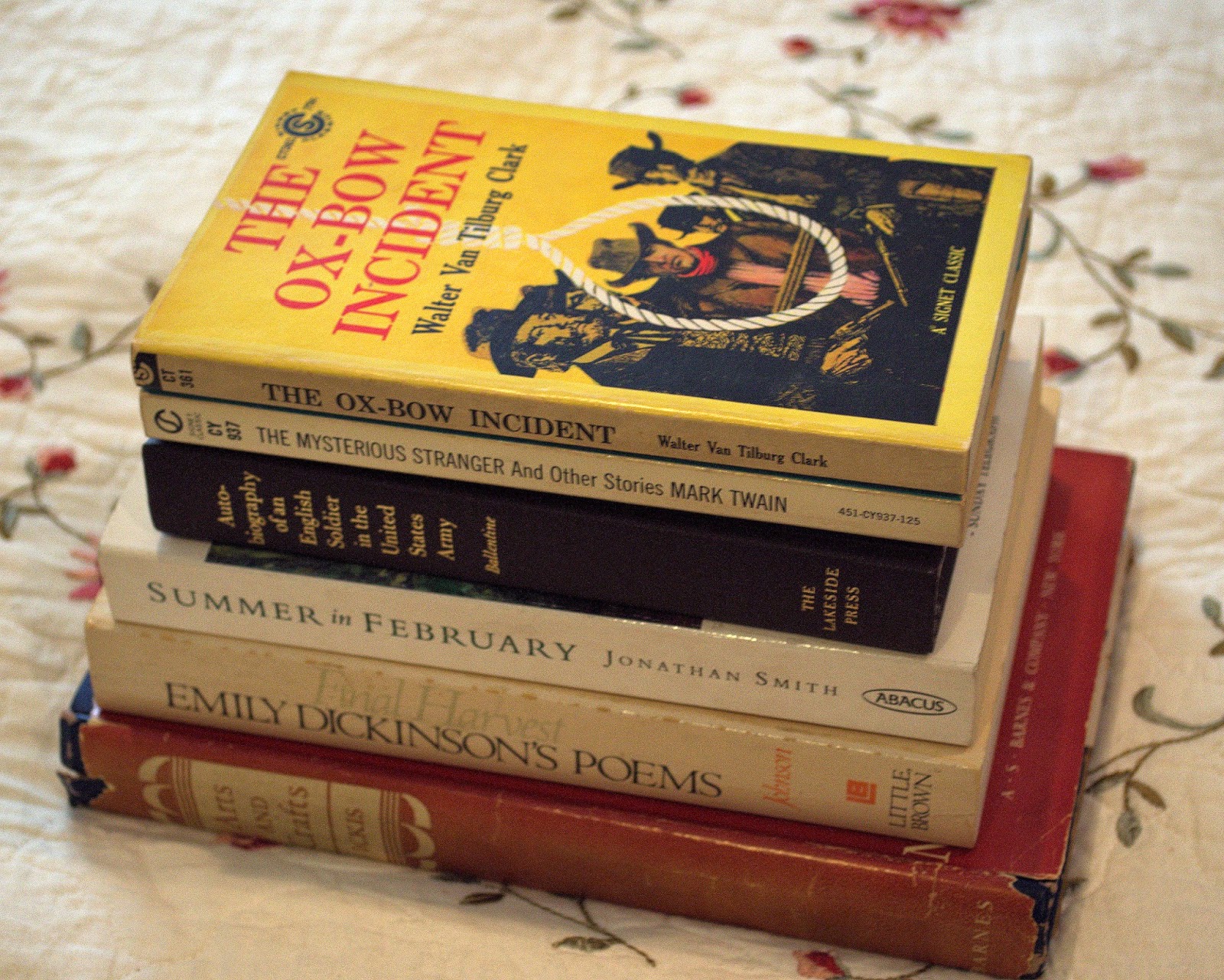 The pile above includes purchases made at Strand Books in New York City and a little secondhand bookstore in downtown Metuchen, New Jersey. Top to bottom: 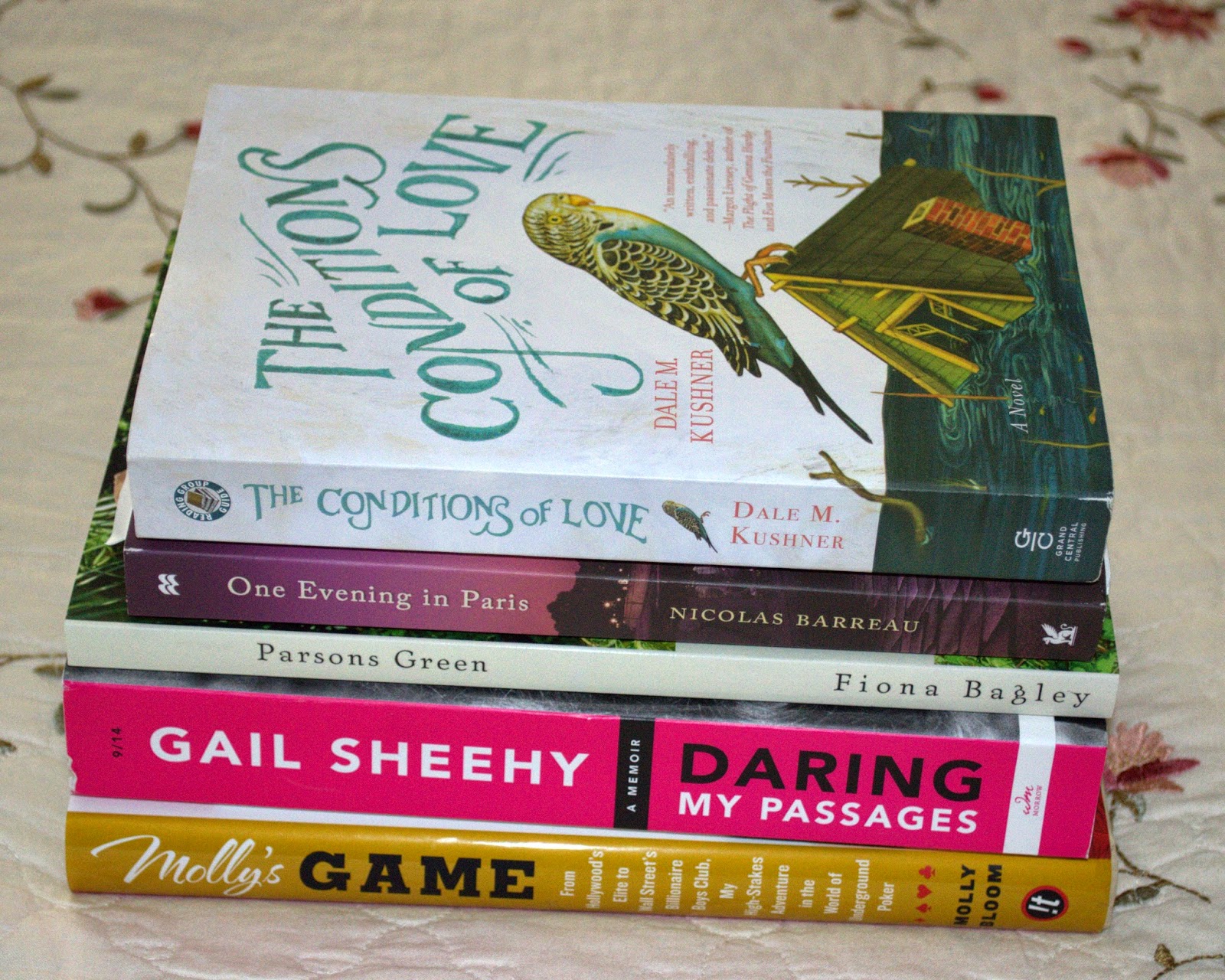 Oops, I photographed yet another book already mentioned (Daring: My Passages by Gail Sheehy). Oh, well. I've got too much going on to redo the photos and it doesn't hurt to show the spine. Others, top to bottom: 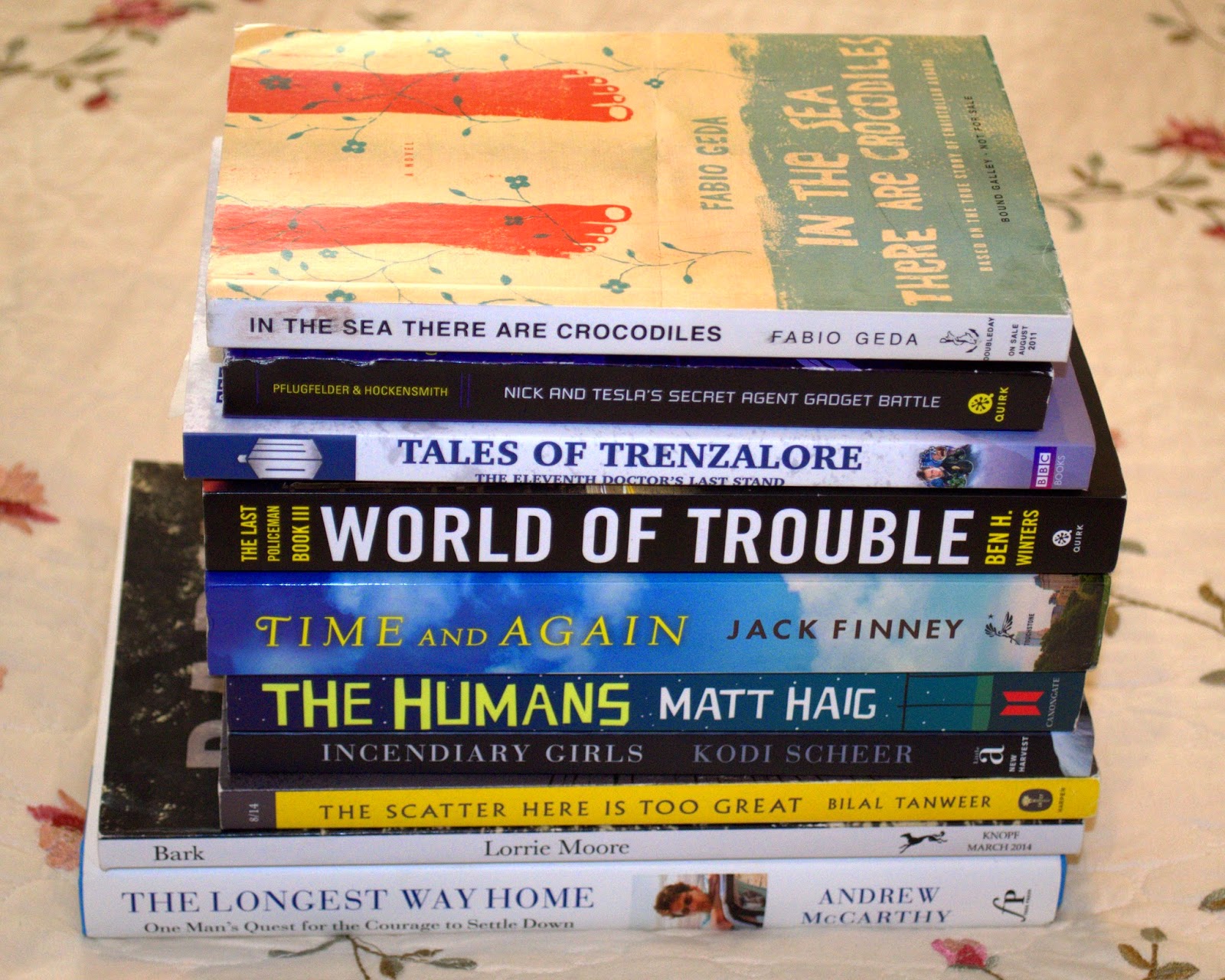 Books finished since my last Monday Malarkey post (some already briefly reviewed -- list is ordered by date completed; pile is by size):

The Humans by Matt Haig - Saved me from boredom -- as did the other passengers on my flight to Newark, who remained incredibly upbeat and relaxed during a 7-hour flight delay; thank you to all, especially the fellow who took turns luggage-watching when I traveled solo.
Bark by Lorrie Moore (short stories)
Incendiary Girls by Kodi Scheer (short stories)
The Longest Way Home by Andrew McCarthy (reread)
The Scatter Here is Too Great by Bilal Tanweer (short stories)
Time and Again by Jack Finney (reread)
World of Trouble by Ben H. Winters
In the Sea There are Crocodiles by Fabio Geda
Nick and Tesla's Secret Agent Gadget Battle by Pflugfelder and Hockensmith
Doctor Who: Tales of Trenzalore by Richards, Mann, Finch and Morris

Boy, Snow, Bird by Helen Oyeyemi - I'm on page 72 and there's something about this book that makes me squirmy and a little irritable. I'm not sure what it is that's making my skin crawl. Oyeyemi's writing is also surprising and I like that, so I'll continue on but I don't feel entirely comfortable saying I think I'll complete the reading. Sometimes a clever twist of phrase only takes you so far.

The movies I've watched were mostly not my fault: 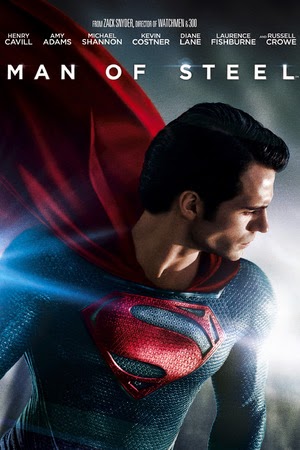 Man of Steel was eldest son's choice, while we were visiting. To be honest, I'm not a big fan of Superman in any form, although I have watched my fair share of the various versions. There are so many!!!  I think the Superman franchise should die. Personal humble opinion, but then I'm not the one who ought to decide since I'm not a fan, period.

On the plus side: Gah, gorgeous actor, that Henry Cavill. I could stare at him all day.  And, Man of Steel does have quite the all-star cast. On the negative side: The protracted fight scenes, overdone/weird home planet technology, changes from the original storyline, awkward lack of chemistry between Superman and Lois Lane all made me cringe. Just not my thing.

On the rather shocking side: My husband liked it.  Say what? He doesn't like much of anything. You might remember I got him to watch Page Eight, recently, and was extremely excited that he liked it enough to sit through the entire movie. I just . . . I don't . . . ???? 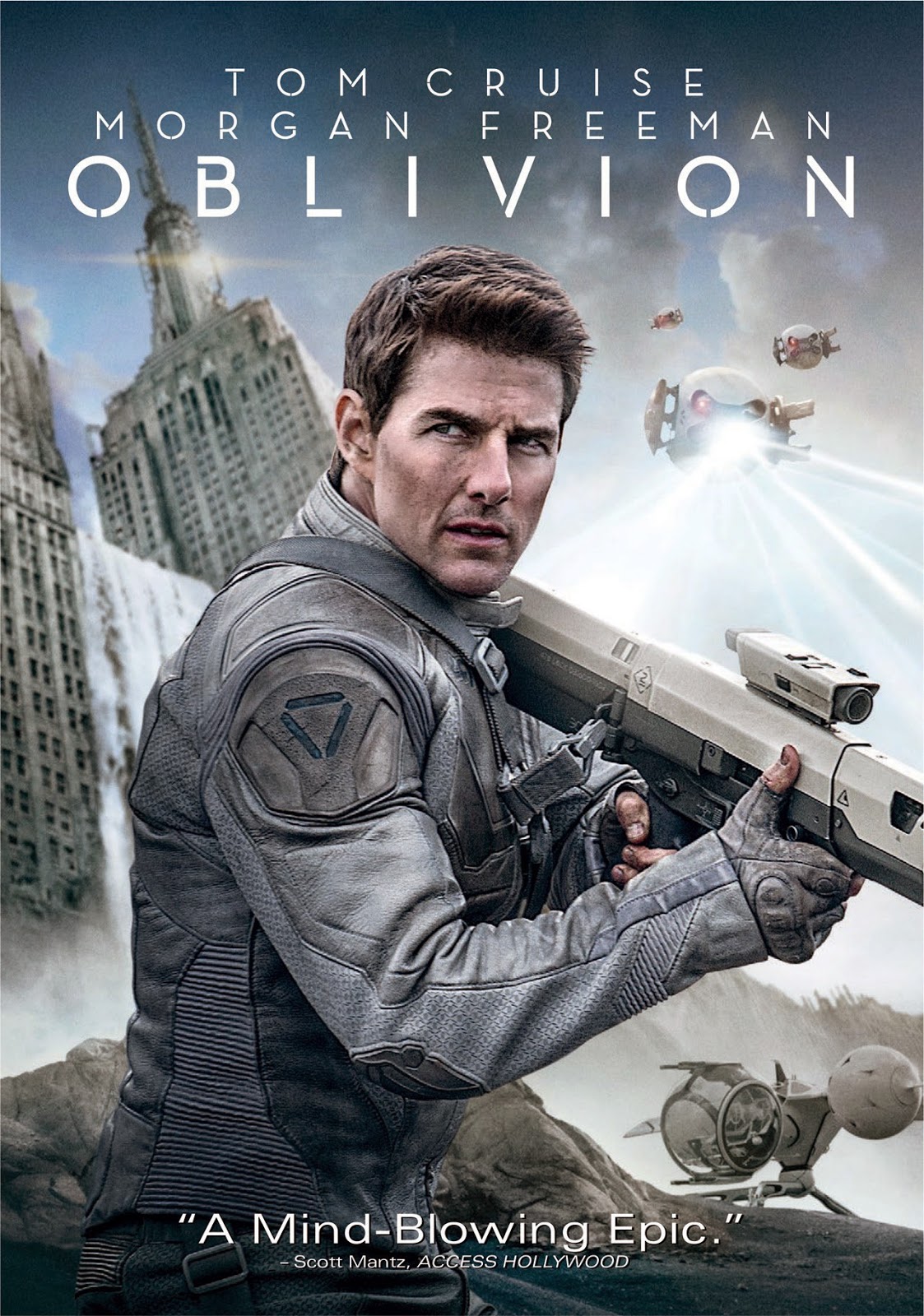 Oblivion was definitely my choice. Kiddo wanted to rent a movie from Red Box and insisted upon an action movie. The choices were pretty limited so I chose Oblivion. I do like sci-fi, although I don't love Tom Cruise. The basic storyline is "World destroyed in war, everyone's gone to Titan except a few people who are meant to clean up, kill off the scavengers/aliens and then join the others." But, then Tom Cruise as "Jack" (Cruise probably doesn't have enough fingers to count the number of times he's played a Jake or a Jack) discovers something he's not meant to find out and becomes a target, has to save the day, yada, yada.

I thought Oblivion was a little slow and it contained some unnecessary scenes but apart from what I'd seen in the trailer, I knew diddly-squat about the movie. I didn't even know Morgan Freeman was in it. That turned out to be a good thing. When Morgan Freeman turned up, I was pleased. The movie has one of those characters with a terrible fake Southern accent and then who shows up but a true Southerner who barely sounds Southern at all! It's like the movie-makers are pulling their own leg.

At any rate, apart from the slow pacing and that horrendous accent, I enjoyed Oblivion. It's a little predictable but still surprised me a couple times and I liked the storyline. Husband left the room. See!  He doesn't like anything!!!! 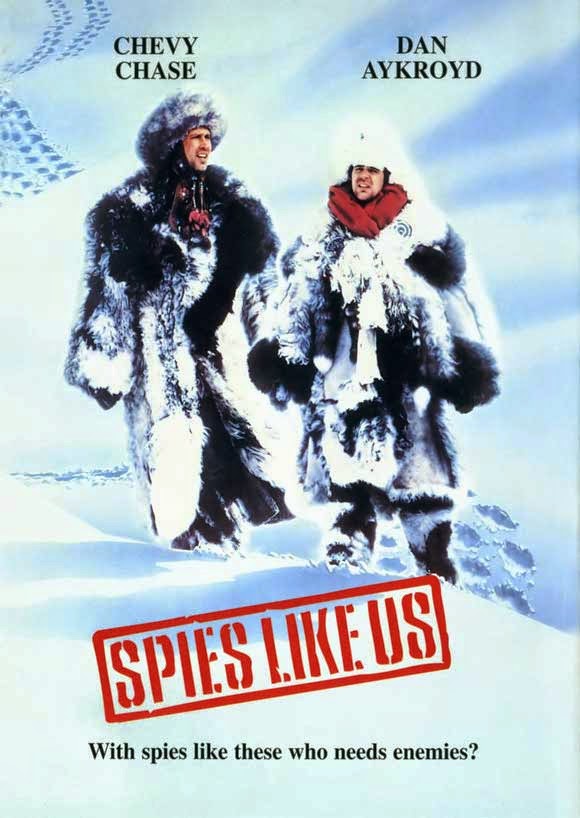 Kiddo brought out a stack of slapstick movies and I made "meh" noises, so Huzzybuns chose. I'm really craving something a little more along the lines of BBC historical, to be honest, and if we're going with Dan Ackroyd, I'd prefer Ghostbusters. We came in on the end of Ghostbusters in New Jersey, one day, and planned to stream the full movie but never got around to doing so.

If you've never seen Spies Like Us, it's worth seeing for the laughs. I've always liked it, although it's not necessarily a personal favorite. Chevy Chase and Dan Ackroyd play two lower-level government employees who are recruited to act as [expendable] decoys during a spy operation in Russia (Reagan era!!) but manage to stumble upon the real job and stop a plot that involves use of Reagan's so-called Star Wars defense system -- which, of course, was a disaster in reality.

Not what I wanted to watch, but Spies Like Us is reliable for a little slapstick fun. I'm pretty sure Husband stayed in the room. He doesn't necessarily stick around merely because he chose the movie.

So . . . what's been up in your world, this past couple of weeks? Have you read anything marvelous?

©2014 Nancy Horner. All rights reserved. If you are reading this post at a site other than Bookfoolery  or its RSS feed, you are reading a stolen feed. Email bookfoolery@gmail.com for written permission to reproduce text or photos.
Posted by Bookfool at 2:13 PM