The Forgotten Seamstress by Liz Trenow 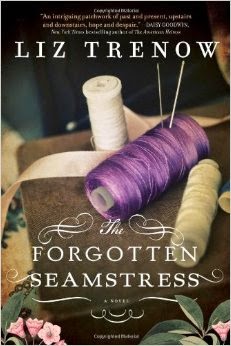 You weren't missing much when I skipped this week's Monday Malarkey because The Forgotten Seamstress and Half Bad (from a friend) were the only books that arrived, last week, Anton and Cecil: Cats at Sea the only book I finished besides One Night in Winter (already reviewed) and The Forgotten Seamstress (here you go).  The cats were the same as always - funny, playful, ever-present during reading time.  Still doing my exercising to MeTV's Emergency! reruns and we're almost done cutting down the second of our infested pear trees -- the other one came down last summer. It also rained a lot. Not a particularly thrilling week. :)

On to the review of The Forgotten Seamstress . . .

At the turn of the 20th century, young orphan Maria Romano and her best friend Nora learn to sew with delicate precision, their skill so admirable that when the time comes for them to go into service they're taken to work at Buckingham Palace. When Maria catches young Prince David's eye and his manservant doesn't do a sewing job to his satisfaction, David has Maria brought upstairs to do a hasty job. The prince is happy enough with the work to call Maria back on occasion. As the prince reaches out to Maria with an affection she never could have imagined, she falls under his spell. But, when she falls pregnant with his child, she is spirited away, locked up in a mental facility where she eventually sews her love into a quilt, knowing nobody around her believes a word she says. Did Maria really give birth to the prince's baby? If so, what became of the child? Is Maria a "fantasist" or were her mental issues created by those who wished to silence her?

In 2008, Caroline Meadows is helping her mother clear her home of unneeded possessions when she comes across a quilt handed down to her by her grandmother. The quilt is made from an odd hodge-podge of designs and fabrics, some of them recognizably of high quality, with a number of embroidered designs and a verse. Curious about its origins and intrigued by an old photo of the quilt and a lady with a twinkle in her eye, Caroline seeks answers to the puzzle of the quilt while her everyday life is both crumbling and soaring with possibilities.  Even when the quilt goes missing, she continues her search. But, the story of the quilt will lead to revelations she could never have dreamed possible.

Dual storylines -- one historical, one contemporary -- have become a pretty commonly used device in recent years and, to be honest, they aren't my favorite. I tend to prefer one storyline or the other, usually the historical, and end up finding the second a slog. That's pretty much how I felt at the beginning of The Forgotten Seamstress.  Maria's story is told through a series of interviews taken on cassette tape at a mental facility in the 1970s, Caroline's story in present tense. As usual, I was much more intrigued by Maria's story than Caroline's. And, yet, Caroline's search unfolds so realistically and the two stories are interwoven with such skill that by about page 100 I was completely engrossed. I had to know what happened to Maria, what Caroline would find out, whether or not Caroline would ever locate the quilt, what would happen to Caroline and whether she would find love, again.  In the end, I closed the book with a sigh, completely satisfied by the answers and how they had been revealed.

Recommended - By far one of the best historical/contemporary blend novels I've read, with an intriguing mystery, clear prose, a unique historical setting and excellent characterization. Particularly recommended to fans of historical fiction, quilting and/or dual storylines. Even though I'm neither knowledgeable about or all that interested in quilts and tend to dislike a blend of historical and contemporary storytelling, I found The Forgotten Seamstress an extremely satisfying and enjoyable read. The only problems I had with it were a slow beginning and a bit of difficulty buying into the upstairs-downstairs relationship. Once I got past those difficulties, I was surprised how much I enjoyed The Forgotten Seamstress.

©2014 Nancy Horner. All rights reserved. If you are reading this post at a site other than Bookfoolery  or its RSS feed, you are reading a stolen feed. Email bookfoolery@gmail.com for written permission to reproduce text or photos.
Posted by Bookfool at 5:32 AM