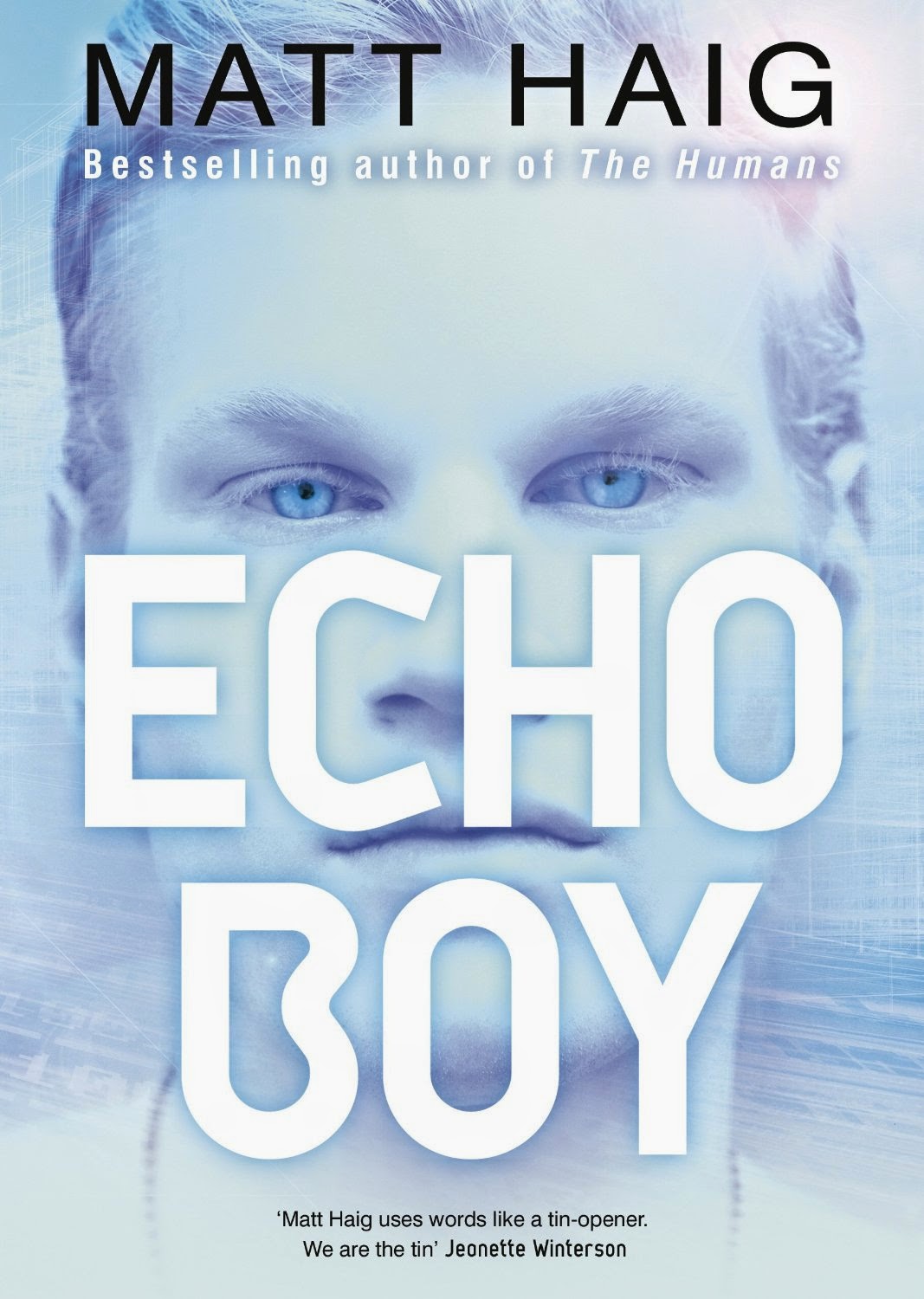 Note on the purchase:  I've read two books by Matt Haig. One was a children's book, To Be a Cat, the other, The Radleys, for adults. I thought To Be a Cat was exceptionally creative, entertaining writing and The Radleys had surprising depth for a book that at its surface appeared to be yet another inventive spin on the vampire story.

I've also come to admire Matt Haig as a human during the couple years that he's been one of my tweeps on Twitter. Ever notice how when you really start to like an author as a human you feel like it's worth going that extra mile to acquire their work? That has become the case with Matt Haig. I only had a minor understanding of what Echo Boy was about and it hasn't yet been released in the U.S. but I figured, "Hey, I really like what I know of this author and I'm pretty besotted with his writing."  I really wanted to read his latest in a timely manner. So, I ordered it from Book Depository and, while I was at it, also ordered a copy of The Humans, both because I've heard so much about it and because I prefer the British cover.  Two birds, one stone.

Audrey has never liked Echos, created humanoids who are devoid of emotions, designed to work for their human masters but not to feel. But, she tolerates her family's Echo, Alissa. Even though Alissa's a little creepy, they've really needed help since her father's accident. Then, one day Alissa becomes a killer. Audrey escapes the murderous Echo only to find herself surrounded by Echoes, living in her wealthy uncle's mansion. Daniel is an Echo who works in uncle Alex Castle's home. But, there is something unusual about Daniel. He is a prototype, one of a kind, and he has a message for Audrey. Is Audrey's fear of Echoes unfounded? Can Daniel be trusted? And, what about her uncle? Audrey's family had an Echo created by Sempura, but Alex Castle is the head of Castle Industries, the leading creator of Echoes. Is Audrey safe with Uncle Alex or is she in danger?

I'm not sure of the exact time period but since the characters occasionally say, "That's so 2090," Echo Boy is clearly set over 150 years in the future. There were moments that I found myself fighting acceptance of this future world but at the same time there were things I loved about it; for example, the flooding and other alterations on Earth due to climate change and some of the newer technology (as fast as it's changed in my own lifetime, much of it seemed plausible). But, it did take some time to immerse myself in this futuristic world and believe in it before I began to really love the story.

Once I'd accepted the author's world building, I became so enraptured by Echo Boy's' storyline that when I closed the book I didn't want to leave that new world and it sent me into a horrendous reading slump. Personally, I think that's high praise.  I also liked Audrey and Daniel enough that I would be perfectly happy if Matt Haig wrote a sequel.

Highly recommended - While I found the futuristic Earth initially difficult to buy into, once I did the story grabbed me hard and I absolutely loved the experience of living in the pages of Echo Boy's dystopian, climate-change-screwed world so much that I had trouble letting it go.  Perfect for YA lovers, dystopian fans, sci-fi fans and other escapists. Great storytelling, a unique world, terrific characterization -- an all-around fun, adventurous read.

©2014 Nancy Horner. All rights reserved. If you are reading this post at a site other than Bookfoolery  or its RSS feed, you are reading a stolen feed. Email bookfoolery@gmail.com for written permission to reproduce text or photos.
Posted by Bookfool at 6:54 AM