Let Me Tell You by Shirley Jackson 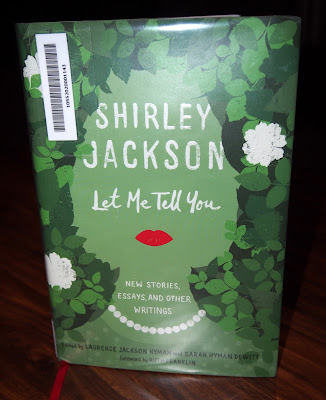 Let Me Tell You by Shirley Jackson was actually due back at the library yesterday but I wasn't quite finished so it will go back this morning, as soon as I'm done telling you about it.

Then, of course, as though my life were not enough complicated, when I finally give up on four-prongs and take out the egg-beater, that surly character is offended in turn, and twists himself into a rigid, disobedient confusion of metal when I try to turn the handle. I get a lot of unnecessary sarcasm from that eggbeater, too. I have let cake batter stand, half-mixed, for half an hour while the eggbeater and the fork calmed down, and at least twice I have had to set them on opposite sides of the kitchen table to keep them from tangling themselves into a snarling battle.

Naturally, every writer has dealt in one way or another with metaphor, and there are few more pathetic sights than a writer hopelessly entangled in a great unweieldy metaphor that has gotten out of control and is spilling all over the story, killing off characters and snapping sentences right and left; huge metaphors, such as this one, are far better left to people with a lot more time and space to write. Adjectives are always good, of course; no short story really ought to be without adjectives, particularly odd ones -- such as "fulsome" -- that the reader usually has to go and look up. And of course adverbs such as "unworthily" -- even if you have to make them up yourself -- are always useful.

Let Me Tell You is the second collection of writings gathered by Jackson's children. The first was published in 1997 and I'm in such a big, freaking hurry that I'm not going to look up the title but I haven't yet read it. Again, her children decided it was about time to go through Jackson's old work, and Let Me Tell You is the result, a book of "short stories, essays, and other writings." I admit to being a little concerned that they would be lesser in some way -- less, punchy or spooky or well-written. What could anyone possibly dig up after 50 years that was still worth reading?

Fret not. The truth is, Shirley Jackson was a brilliant writer and her writing is timeless, although some of it also gives you that sensation of stepping back in time. Let Me Tell You was yet another book I wanted to keep going forever (the last book to make me feel that way was Ross Poldark). I'll probably hold out for the paperback release, assuming there will be one, but checking the book out from the library only convinced me that  Let Me Tell You is a book that I need to read over and over and over again. There are subtleties that you miss on the first reading of a Jackson story and hints about some of those bits of symbolism in her novels that I missed entirely.

With very few exceptions, I loved the way the short stories made me squirm. And, there were several essays that have become new favorites. "Good Old House", about living in a house that may be haunted, is my favorite. Jackson never actually uses the word "haunted", instead skirting around it, slowly piling up the stories of things that have gone missing and then returned, clothing showing up repaired, etc., until you can't help but feel like, at the very least, there is some sort of mystical presence.

There are quite a few stories about being a writer with children and a handful of lectures and writings about writing, itself. I posted the quote from "Garlic in Fiction" primarily because writers are constantly told to cut, cut, cut adjectives. It's nice to see an alternative viewpoint.

Highly recommended - If you're a Shirley Jackson fan, you don't want to miss this one. It's a keeper. Since many of the short stories are suspenseful, Let Me Tell You is also an excellent choice for the RIP Challenge.  Let Me Tell You is a 2015 Random House release.

©2015 Nancy Horner. All rights reserved. If you are reading this post at a site other than Bookfoolery  or its RSS feed, you are reading a stolen feed. Email bookfoolery@gmail.com for written permission to reproduce text or photos.
Posted by Bookfool at 9:29 AM