The Big Bad Book of Bill Murray by Robert Schnakenberg 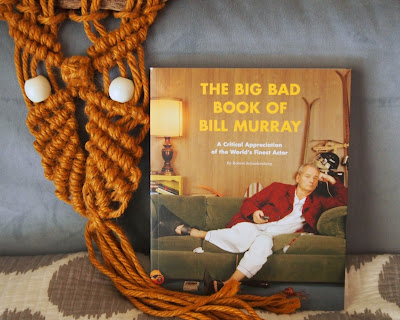 The Big Bad Book of Bill Murray: A Critical Appreciation of the World's Finest Actor
by Robert Schnakenberg
Copyright 2015 (This is an assumption; I don't see a copyright date in the book)
Quirk Books - Biography in encyclopedia format/nonfiction
Includes filmography, bibliography, quotes, and numerous photos
272 pp.

The Big Bad Book of Bill Murray was my most-wanted fall release, so I was really excited to get the opportunity to review. I love Bill Murray. He's quirky and unpredictable; he becomes even more interesting with age. I can't say there are actually all that many of his movies that I'm in love with, but those that I do like are keepers that the entire family has watched over and over and over, again. Stripes, Ghostbusters and What About Bob? are some of our favorites. And, I learned enough about his movies (some of which I'd never heard about) that I have a list of unwatched Murray movies to seek.

The Big Bad Book of Bill Murray is set up like an encyclopedia of Murray, with topics as diverse as the Chicago Cubs and Nudity, in addition to entries about movies in which he's starred, shrugged off, and even some he never heard about because he neglected to return phone calls. There are anecdotes interspersed, plenty of quotes, and tons of photos.

Things I learned about Bill Murray:


My only complaint about The Big Bad Book of Bill Murray is that the photos are not all labeled. I like a caption beneath every photo so that I know exactly who I'm looking at and what's going on, even if the subject matter is obvious. Some photos contained captions, many did not.

Highly recommended - Fans of Bill Murray will appreciate this book but beware! As in every case in which you learn about a beloved actor's personality, you may find your opinion of him slightly dimmed by reality (then again, he may become your hero . . . I guess it depends on the reader).  Regardless, it's a terrific, all-encompassing reference, especially if you want to, say, have a Weekend Murraython. Since many of his best and worst comedy skits are also mentioned, The Big Bad Book of Bill Murray is a terrific reference for looking up old Saturday Night Live material and other early Murray skits, as well.

Many thanks to Quirk Books for catching my tweet and kindly offering me a copy of The Big Bad Book of Bill Murray!

©2015 Nancy Horner. All rights reserved. If you are reading this post at a site other than Bookfoolery  or its RSS feed, you are reading a stolen feed. Email bookfoolery@gmail.com for written permission to reproduce text or photos.
Posted by Bookfool at 12:16 PM