I Crawl Through It by A. S. King 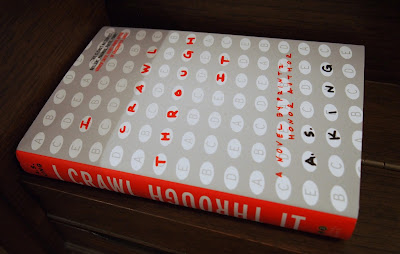 I'm not sure if I spoiled anything, but the unfolding storyling in I Crawl Through It is so unique and special that it might be best to go into the reading entirely blind. If you're afraid I'll give something, anything away, please skip this review and/or page down and only read below the marked "end possible spoilers" line.

YOU HAVE BEEN WARNED! I'm really nice that way.

I've got a new label that I came up with specifically because of this book, although it would definitely cover plenty of other books I've read over the years: "The good kind of weird". The weird comes in the fine line between what is real and what is metaphor.

A deceptively compassionate tale of flawed characters, I Crawl Through It is told from several viewpoints, but I felt like it was mostly the story of Stanzi, a girl who has named herself after Mozart's wife after watching Amadeus 50 times. Her real name is often stated as a blank. Stanzi wears a lab coat everywhere. She is a pro at dissection and while she may seem preturnaturally calm at times -- when the "dangerous bush man" jumps out of the bushes and exposes himself to her, for example -- at other times she sees herself as split into two entirely different people.

China is another character who is metaphorically disastrous and realistically damaged. She has turned herself inside-out. Those around her can tell when she's inside-out and when she's summoned the courage to return to normal. She's crying out for help. Stanzi knows it; she is aware of what happened to China, but doesn't have the emotional strength to deal with her friend's problem.

Among the other flawed and damaged characters are a liar whose hair grows like Pinocchio's nose, a gifted young man who is building an invisible helicopter (which Stanzi can only see on Tuesdays, when it is definitely red), a set of parents who travel to the sites of school shootings and then leave a TV dinner and a note that they've gone to bed for their daughter every night, a mother who spends her time having basement parties with an unsavory theme, and the "dangerous bush man" who spends his free time making beautifully-decorated carved letters and exposing himself.

At school, the daily routine has been interrupted by bomb threats for weeks. Who is sending the bomb threats and why? Is Gustav's helicopter really invisible? Why is Stanzi split in two? Will anyone ever acknowledge China's pain?

Everyone is flawed and all are brilliantly rendered. There's a humorous confusion of interplay between metaphor and imagination. What's real? What is potentially magical but possibly entirely imaginary? It's sometimes hard to tell and yet, as the characters' stories become fully formed, the fine line between the two becomes less important. What's crucial to this story is its heart -- the examination of trauma and reaction, and how a little kindness and a caring ear make a big difference in how someone who has been traumatized copes.

Highly recommended - I Crawl Through It is my introduction to A. S. King and I was quite simply blown away. For that I have the YA author Andrew Smith to thank. His recommendation was so enthusiastic that I immediately pre-ordered the book. Many, many thanks to Mr. Smith. I Crawl Through It will definitely be one of my top reads of the year. On Twitter, I referred to the book as a "deceptively brilliant story with heart", "deceptive" meaning the unique blend of metaphor, unreliable narration, and bent perception under which lies a tremendous depth of compassion for those who have been traumatized and for whom simply functioning on an everyday basis is a challenge. In the end, it doesn't even matter whether or not the helicopter is real or the holes that are crawled through exist. What matters is that a little kindness goes a long way.

Seriously, so impressed. I've asked a a King fan in my only book group which book I should look for next and she recommended Everybody Sees the Ants (thanks, Melissa!) Any other fans of King out there who would like to share their favorite titles, please do let me know which you've particularly enjoyed. I'm looking forward to reading more by A. S. King!

Addendum: I neglected to mention that while I Crawl Through It tackles some serious topics, the author still managed to make it a fun (even a bit humorous) read. I found myself smiling a lot.


©2015 Nancy Horner. All rights reserved. If you are reading this post at a site other than Bookfoolery  or its RSS feed, you are reading a stolen feed. Email bookfoolery@gmail.com for written permission to reproduce text or photos.
Posted by Bookfool at 10:06 AM

Email ThisBlogThis!Share to TwitterShare to FacebookShare to Pinterest
Labels: A. S. King, highly recommended - a new favorite, Little Brown and Co., the good kind of weird, YA