The Night Sister by Jennifer McMahon 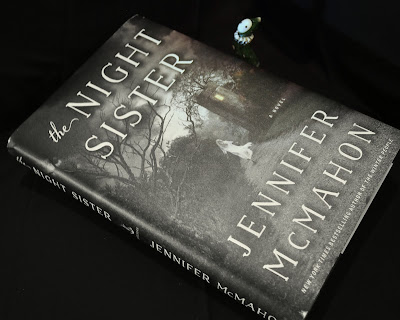 He was still a joke to Piper. He saw it in the way she watched him, waiting for him to screw up in some way, to let Margot down. There was something slightly amused--mocking even--in the way she looked at him and spoke to him, as if he were still an awkward little boy.

Amy, Piper, and Margot were best friends as children. Amy lived in the Tower Motel, a motel in London, Vermont with a tower fashioned after the Tower of London of English fame. After a highway began leading traffic around the town, the hotel lost its thriving business and it sat, mostly empty, the tower crumbling nearby. The friendship of the three girls faded after the year they found a suitcase full of letters written by Amy's great aunt, Sylvie Slater, who supposedly went to Hollywood but was never heard from, again.

When Amy and her family are found murdered, only their young daughter still alive, Piper returns from California, half out of concern for pregnant Margot's health but mostly because of a cryptic note Amy left behind. Margot and Piper know it's a clue and they don't believe Amy was capable of murder, but they'll have to work carefully around Margot's husband Jason to determine what happened. To find out what's going on and what kind of monster killed Amy's family, they must return to the hotel and delve into the lives of the past, to Sylvie and Rose. Rose, Amy's grandmother, is still living. And, she believes in monsters.

The Night Sister is seriously creepy, but it's more frightening at the beginning and then loses a bit of its tension as the story goes back and forth in time. Still, the questions that make the book a page-turner continue to pull you through the book, even if it seems to lack the urgency of the beginning. What became of young Sylvie? What did the three girls find in the suitcase that caused them to drift apart? What's the meaning of the message about the 29th room? Are there really monsters in Vermont? Was Amy killed by a monster or did she murder her own family?

Recommended - I liked The Night Sister for the fact that the pages flew, but I confess that I found the ending a bit of a letdown and some of the answers to the questions were a shade disappointing. I think it's partly that I wanted it to go one direction and instead it went another. Having said that, I enjoyed the story, in general (I gave it 4 stars at Goodreads), and think it's absolutely right for this time of year and would make an excellent read for the RIP X Challenge, if you're participating. It did give me nightmares at the beginning, so watch out if you're nightmare prone!


©2015 Nancy Horner. All rights reserved. If you are reading this post at a site other than Bookfoolery  or its RSS feed, you are reading a stolen feed. Email bookfoolery@gmail.com for written permission to reproduce text or photos.
Posted by Bookfool at 1:20 PM

Email ThisBlogThis!Share to TwitterShare to FacebookShare to Pinterest
Labels: Jennifer McMahon, paranormal elements, recommended but contains some frightening or unsettling situations, some violence and gore, suspense