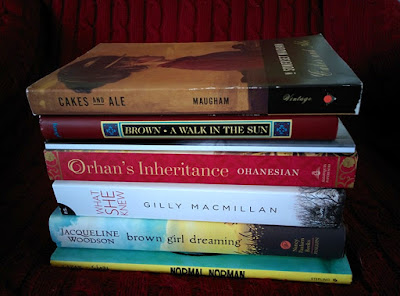 February of 2016 was an unusual month for me in two ways. First, it was another unusually low-count month. I credit that partly to the fact that I made the mistake of continuing to read two books that weren't grabbing me, although I have to keep reiterating the fact that I think they both involved some solid storytelling; it was my mood that was off. The second way February was unusual? I reviewed everything I read in a timely manner. That doesn't happen often! Links to the full reviews are provided below.

9. What Remains of Me by Alison Gaylin - A convicted murderer visits her father-in-law and returns home drenched in blood. Did she kill him or just happen to show up at the wrong time? An unreliable narrator who keeps certain facts locked away in mental drawers and a twisty plot kept me guessing all the way to the end.

10. Cakes and Ale by W. Somerset Maugham - My classic read for February tells the story of an author's colorful first wife, a story the narrator reveals when he is asked to share what he knows about the late author's life. Originally entitled "Skeletons in the Closet" for good reason, it's about secrets that are not revealed and why a biography isn't necessarily as accurate as one might expect. Loved it.

11. Weirdo Simpatico by Katy Bourne - A slim book of flash fiction brilliantly written, wacky, and entertaining. As I type, there is a giveaway for this book in process at Goodreads. You should definitely sign up.

12. Orhan's Inheritance by Aline Ohanesian - When his grandfather dies and leaves the family estate to an elderly woman in America, Orhan travels to visit her, hoping to get her to return the property to the family but instead finding out the truth about his family's past and the old woman's experience as a survivor of the Armenian Genocide. Liked but didn't love this but it was probably just bad timing on my part.

13. Brown Girl Dreaming by Jacqueline Woodson - The story of the author's childhood in Ohio, South Carolina, and New York City, her struggles with reading, and her determination to become a writer. A lovely, inspiring, beautifully-written memoir and one of my favorites of the month.

14. What She Knew by Gilly Macmillan - A year has passed since a little boy went missing when his mother let him run ahead of her in the woods. She recounts the story of his disappearance and how people came to believe her guilty of murder after a botched television plea while the parallel story of one of the policemen leading the investigation is told through his conversations with a psychiatrist. I particularly liked the way the author showed how people are judged via social media through the story of the fictional mother.

15. Normal Norman by Tara Lazar and S. Britt - Norman, a purple orangutan, has been chosen by the scientist narrator to display the concept of normality. But, it turns out there's nothing normal about Norman because there is no such thing as normal. A book that encourages youngsters to embrace uniqueness. Loved it.

16. A Walk in the Sun by Harry Brown - My absolute favorite read of the month, a WWII novel about  a platoon of American soldiers taking a 6-mile hike from the beach to a farmhouse in Italy. There's an immediacy and truth to this story that makes it one of the best WWII novels I've ever read.


©2016 Nancy Horner. All rights reserved. If you are reading this post at a site other than Bookfoolery  or its RSS feed, you are reading a stolen feed. Email bookfoolery@gmail.com for written permission to reproduce text or photos.
Posted by Bookfool at 7:30 AM