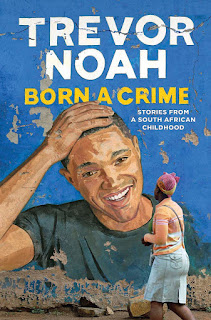 If you watch The Daily Show, these days, you've probably seen Trevor Noah talk about the fact that his birth during apartheid was a crime. His mother was a black South African, his father a white Swiss/German. As a mixed-race person, he was an outcast in every group - even the coloreds, who were mixed race but generally stuck together. Being mixed race with a black mother was different than having two colored parents; for years, Trevor could not be seen with either his mother or his father without potentially risking a beating or arrest of his mother.

Born a Crime is really a book about race, how a small percentage of people can use hatred and division to rule a larger number of people, and what it was like for Noah to grow up on the fringe, not quite fitting into any group at all. It's not about how he became a comedian who traveled the world and eventually settled in the U.S.  In fact, I hope he'll eventually write that book, as well.

Trevor Noah is a sharp guy, very articulate, and the book is well-written, illuminating, sometimes a bit shocking, and occasionally funny. You can't help but admire his mother's strength of character and the fact that Noah not only survived his crazy childhood but also came out of it with such a tremendous sense of humor and the ability to view his experiences as lessons to build on, rather than enduring pain. I admired him before; I'm in awe of him, now.

Highly recommended - Excellent writing and timely, as Born a Crime shines a light on racial division and how people can be subjugated merely by turning against each other.


©2016 Nancy Horner. All rights reserved. If you are reading this post at a site other than Bookfoolery  or its RSS feed, you are reading a stolen feed. Email bookfoolery@gmail.com for written permission to reproduce text or photos.
Posted by Bookfool at 1:11 PM