Under the Influence by Joyce Maynard 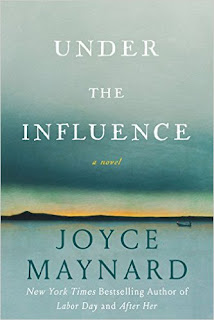 I'm curious whether or not other people do this. When I start a book, I generally go into it blind. I will have read the synopsis when I bought or requested a book, of course, but then I avoid the description on the book cover or the cover flap deliberately because I've had quite a few books spoiled by cover descriptions that gave away too much of the plot, over the years. Once I get started and have developed a first impression, I will dash off to Goodreads to see what the overall rating is. I might read a review or two out of curiosity, but I usually don't (just in case - not a fan of spoilers unless something I really, really don't want to happen has been foreshadowed).

I'd probably read 50 pages of Under the Influence when I checked the Goodreads rating; and, I did so because I was finding the book duller than I anticipated. The ratings were much higher than I expected and that helped me get through the book. It continued to drag but picked up a bit in the last 1/3 or so.

Helen made a huge mistake. When she met her husband, he was charming and kind. But, over time, his temper began to show and eventually she began to drink after putting little Ollie to bed. After their divorce, she would drain an entire bottle without thought. But, then, one night Helen was faced with an emergency after she'd already drained a bottle.

Under the Influence begins with Helen looking back on the friendship that developed after she lost custody of her son and is told entirely as a reflection of what happened, years back, when she had limited visitation rights and was befriended by a fabulously wealthy couple while working for a caterer. Ava and Swift Havilland took Helen under their wing and put her to work photographing their possessions, capturing photos of their adopted dogs, running errands. For the first time in her life, Helen felt like she was cared for. But, there were hints that something may have been off. And, then came the tragedy.

Recommended but not a favorite - The slow pace and some detail that I found tiresome made Under the Influence drag a bit, but in the end the author redeemed herself by writing a pretty bang-up ending. I don't consider Under the Influence a favorite but I liked it. And, I do feel like it was worth sticking it out till the end. Having said that, I should add that I really was never tempted to stop reading; I just didn't care for the slow pace.

©2016 Nancy Horner. All rights reserved. If you are reading this post at a site other than Bookfoolery  or its RSS feed, you are reading a stolen feed. Email bookfoolery@gmail.com for written permission to reproduce text or photos.
Posted by Bookfool at 8:01 AM

Email ThisBlogThis!Share to TwitterShare to FacebookShare to Pinterest
Labels: Joyce Maynard, recommended but not a favorite, William Morrow