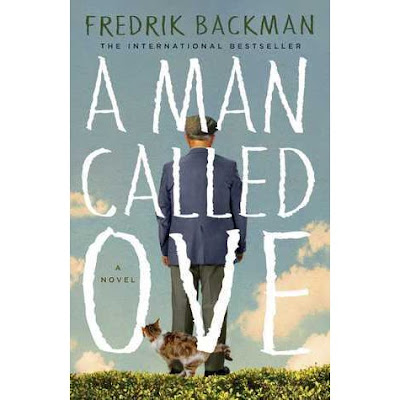 This time I'm going to keep my review as short as possible (a relative term, that word "short") because A) It appears that everyone on the planet read this book before me, and B) I can't remember B. Oh, well. There was a reason but I forgot what it was.

At any rate, I bought A Man Called Ove and it arrived literally the day before someone recommended it as a selection for F2F discussion. I bought it partly because a friend told me Ove was a curmudgeon. Having had a bit of experience with curmudgeons, I'm aware that they can be misunderstood and, in the long run, more likeable than you might expect. Just because you're a little grumpy doesn't mean you don't have a heart. And, that was definitely the case with Ove, a widower who has decided to take his life so that he can join his wife in the Great Beyond (my wording).

We talked about quite a variety of topics at the F2F discussion. One of our members passed around a page listing all the ways the name Ove can be pronounced. It turns out there pretty much isn't a right or wrong way. Even within Sweden, the name is not pronounced the same by everybody. This came into play during the discussion as one member mentioned how the name is pronounced in the movie and some of us stuck with the movie pronunciation while the rest just decided to go with whatever way we'd pronounced it in our heads as we read.

We talked about how the book begins a bit slapstick but then takes a more serious turn. And, we talked about the neighbors, Ove's personality, specific scenes and what they revealed about the main character, how and why he might have been misunderstood and whether or not we liked him. The one thing we didn't talk about -- and I didn't realize this till the next day -- was the cat. And, I thought the cat was rather crucial, actually. Also, I liked the cat because it was a cat and I'm a cat person, but that's neither here nor there. What I loved most about A Man Called Ove was the fact that it's the kind of book in which a group of strangers form a kind of surrogate family, which just happens to be my favorite kind of book.

Highly recommended - Heartwarming, sometimes funny, simply a wonderful story. Everyone in my F2F group enjoyed A Man Called Ove. Some found it a little sad but most found it uplifting and enjoyed getting to know Ove, a crotchety old man with a big heart. I loved A Man Called Ove enough that I want to read everything Fredrik Backman has written. At the same time I'm a little nervous about reading his other work because I loved Ove so much. It's worth mentioning that we all thought the translation was brilliant and several of us agreed it's a book we'll revisit. If you're one of the rare people who haven't yet read A Man Called Ove, go forth and purchase. It's definitely worth owning.

©2017 Nancy Horner. All rights reserved. If you are reading this post at a site other than Bookfoolery  or its RSS feed, you are reading a stolen feed. Email bookfoolery@gmail.com for written permission to reproduce text or photos.
Posted by Bookfool at 8:00 AM