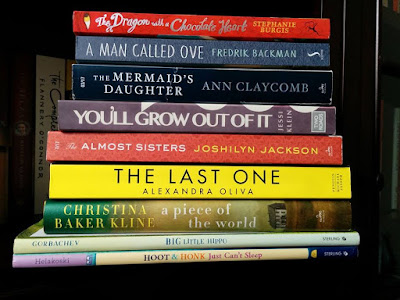 18. The Last One by Alexandra Oliva - The only book I've managed to review (so far), The Last One is about a participant in a survival reality series who doesn't realize the series has ended after a deadly pandemic strikes. You can click through the link to read more, but since writing about this story I noticed that there's a real-life reality series that sounds almost exactly like the one described in the book. I saw it advertised while I was in Oklahoma. Boy, was I surprised.

19. The Almost Sisters by Joshilyn Jackson - Leia is in her late twenties, single, and a successful graphic novelist who has had bad luck with men. When a one-night stand with a man she knows only as Batman (at a comic convention) leaves her pregnant, Leia's excited but concerned, knowing her child will be mixed race. Add in a sister whose marriage is falling apart and a grandmother in the South who is suffering from dementia and Leia has more than her fair share of challenges to deal with. More on this one, later! A lot happens. I particularly liked the way Jackson dealt with racial issues.

20. You'll Grow Out of It by Jessi Klein - The memoir of a comedian (with whom I was unfamiliar), recommended to me as a feminist read, so I guess I could count it as a challenge read. The essays were more focused on her sex life than any feminist notions, though, and at times I found the details revolting enough to skip the end of a chapter. That's extremely unusual for me; I'm not a page-skipper. I laughed a few times, but this book was definitely not for me.

21. A Man Called Ove by Fredrik Backman - This description may be a spoiler - skip if you're concerned, please!!! The story of a widower who has decided to kill himself so he can join his wife in Heaven and how, after a few comical mishaps and some friendly persuasion, his neighbors and a stray cat become his second family. A Man Called Ove was my F2F group's March selection and I think everyone loved it. Oddly, we never got around to discussing the cat.

22. A Piece of the World by Christina Baker Kline - One of the books on my mental "most anticipated" list, the story of the subject of the painting "Christina's World" by Andrew Wyeth. While not quite as compelling as Orphan Train (it's hard not to compare), Kline's writing is lovely and I enjoyed getting to know Christina, her brother, the artist, and his wife.

23. The Mermaid's Daughter by Ann Claycomb - Kathleen comes from a long line of women who took their own lives after giving birth to a single daughter and she has, herself, faced a lifetime of pain. She and her partner, Harriet (aka "Harry") deal with it as best they can. But, when Kathleen and Harry take a trip to Florida and voices call to Kathleen from the ocean, will she too succumb to the curse of her mermaid ancestors? Again, lots of story, here. I really enjoyed this unusual book and look forward to reviewing it in greater detail.

24. Big Little Hippo by Valeri Gorbachev - Little Hippo is smaller than everyone, it seems - everyone in his family and even most of the animals who live nearby. But, when he encounters a tiny beetle, he realizes he's not so little, after all. Fabulous illustrations but a weak storyline made this one just a so-so read, in my humble opinion. However, my 2 1/2-year-old granddaughter did sit through the entire story.

25. Hoot and Honk Just Can't Sleep by Leslie Helakoski - Hoot is an owlet and Honk a gosling. When their eggs are switched, they end up with the wrong parents. Hoot lives with a diurnal family of geese and Honk with a nocturnal owl family. Fortunately, they're able to find their way back home when their inability to sleep with the rest of their accidental family members leads to a bit of wandering. A super cute, rhyming story.

26. The Dragon with a Chocolate Heart by Stephanie Burgis - Aventurine is young enough that her dragon scales haven't hardened, forcing her to remain indoors. Tired of being cooped up in the family cave, she decides to go exploring. But, when a food mage tricks her into drinking enchanted chocolate, she is turned into a human. And, being human isn't as easy as it appears. A charming middle grade story.

There's no contest, this month. My absolute favorite book was A Man Called Ove. Before I even opened the book, I knew it was a story about a curmudgeon. I know some people find Ove perplexing or even annoying because of that, but there have been plenty of curmudgeons who shared my world and I find them every bit as amusing (and transparent) as Ove's wife and neighbor did. He's a great character and that particular type of novel - a story in which a group of strangers form an unexpected family unit - is my absolute favorite.

I also enjoyed The Last One, A Piece of the World, and The Mermaid's Daughter. The Almost Sister was very good but I did find it a bit slow. And, I liked The Dragon with a Chocolate Heart a lot, but occasionally disliked the style of writing, which suits MG readers better than it does an adult. Hoot and Honk Just Can't Sleep is adorable.

I liked but didn't love Big Little Hippo, which has a somewhat pointless storyline, in my humble opinion, but awesome illustrations. The storyline may not a problem for small children, but my granddaughter was sick when she sat through it, so we couldn't really gauge her interest level.

I really did not enjoy You'll Grow Out of It. There were moments that the author made me smile or even chuckle a bit, but they were few and far between. The most common reaction I had was "Eww!" Too much information about the author's messy sex life and a theme about not being particularly girly that came off as insincere. I will say, though, that as I was reading I was aware that I know people who would probably enjoy the book. I just wasn't the right audience.

That pile looks pretty good, in hindsight, although it sure seemed like a slumpy kind of month - possibly because I didn't get to all of the books I intended to read. I've folded some over into April. Wish me luck getting to everything!

©2017 Nancy Horner. All rights reserved. If you are reading this post at a site other than Bookfoolery  or its RSS feed, you are reading a stolen feed. Email bookfoolery@gmail.com for written permission to reproduce text or photos.
Posted by Bookfool at 5:28 PM