You'll Grow Out of It by Jessi Klein 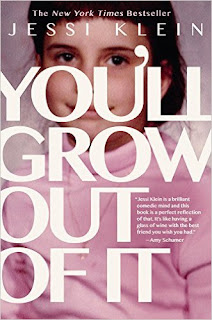 I don't particularly like writing negative reviews, so I'll keep this one as short as I can and be sure to tell you what I liked about it . . . which wasn't much, but you know. I try.

You'll Grow Out of It by Jessi Klein was recommended to me when I asked for feminist title suggestions on Twitter. I looked it up and found that the reviews were mostly positive and the blurb claimed it was funny. At the time, I was coming off two depressing books in a row, The Handmaid's Tale being one of them, so "funny" was definitely appealing. And, it did start out well. Klein described herself as someone who never quite grew out of the tomboy stage, coining the term "tom man" to describe a grown-up tomboy.

But, then the essays segued into what the author, a comedian, is apparently known for (I was unfamiliar with her): tales of her sex life. There is probably very little I like less than reading about someone's sex life and I have, in fact, skipped a lot of books that were described as humorous for just that reason (even though I enjoy humor). I don't even like fictional sex scenes unless, of course, what happens in the bedroom is relevant to the plot. I'm not a prude; it's just a personal preference. So, the fact that a good portion of You'll Grow Out of It is dedicated to stories about various boyfriends was a guarantee that I wasn't going to love the book. Had I known about Klein's style of comedy, I would have avoided it entirely.

Having said that, I thought the book had its moments. I enjoyed reading about Klein's search for her wedding dress. I think most married women can probably relate to that experience in some way. I also loved it that she compared that particular shopping experience to the feeling she gets when she tries to explain why she doesn't find Brad Pitt appealing - primarily because I don't find Brad Pitt appealing and nobody gets that. I also occasionally enjoyed her descriptive capacity. If she'd avoided using it on body parts, I would have appreciated it even more.

Neither recommended or not recommended - Not for me, but as I was reading You'll Grow Out of It, I thought of a couple friends who would probably enjoy it. If you dislike reading about someone else's sex life, avoid it. I also found the "not a girly girl and not attractive" theme somewhat disingenous. Klein had a lot of boyfriends, plenty of girlfriends to call or get drunk with when a relationship ended, and an affection for designer clothing. Those all sound pretty girly to me. Also, I looked her up. The wedding dress she said her friends turned their nose up at was gorgeous and so is she. Once you've seen what the author looks like, the whole concept of being not girly enough just seems ridiculous.

Again, I laughed a couple times and enjoyed her descriptive capacity to a certain extent. So, while this book is not for me, I would not tell people not to read it. I would say it depends entirely upon your taste in memoirs/essays. I would also definitely not classify this book as a feminist read at all because it doesn't deal with feminist issues, unless you consider "not looking girly enough" an issue. I do not. To me, feminism is about everyone, women included, having the same rights in work and in general daily living. While in some professions that may apply to such issues as dress code (forcing women to wear high heels, for example), that didn't appear to be the case.

©2017 Nancy Horner. All rights reserved. If you are reading this post at a site other than Bookfoolery  or its RSS feed, you are reading a stolen feed. Email bookfoolery@gmail.com for written permission to reproduce text or photos.
Posted by Bookfool at 5:00 AM