How to make the words "Happy Monday" sound odd when paired with a book cover: 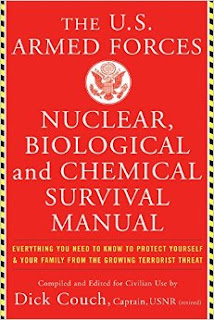 
Weird arrival, eh? A friend recently posted about his purchase of potassium iodide tablets for radiation emergencies (he is understandably freaked out by Trump's posturing and Kim Jong Un's escalation of hostilities, in response) and one of his friends posted in reply that he'd bought potassium iodide tablets, as well, but also the above book, a straw that filters toxins from water, and a gas mask. Naturally, I zoned in on the book. Can't hurt to know what to do in the event of some sort of attack or a cloud of radiation heading your way, right? The U.S. Armed Forces Nuclear, Biological, and Chemical Survival Manual was my only arrival, last week, and it was a purchase.


Only one book finished, last week, and that came as no surprise. I knew the two books I was reading would take me some time to get through. The Plague is focused on feelings and relationships and what becomes important to people when faced with the likelihood that they or their loved ones will die, so it wasn't often as gruesome as it could have been. Still, I occasionally had to take breaks from it. I also fell asleep without reading at all, twice (very unusual) and since I usually only read at night, I probably read a bit less than I do in a more normal week.


Clearly, last week was a good blogging week. That's because I actually pre-posted reviews, for once. I don't normally do that because I don't have the patience to sit long enough to type a full week's worth of posts, but I had other things to accomplish, last week, so I knew I needed to write a bunch of posts at once or I wouldn't likely post at all. I'm still a month behind on reviews, but last week's posting certainly put a nice dent in the backlog.


I misplaced Mister Monkey, last year, but finally located my ARC about a month ago, and it looks like it's going to be a nice, light read -- which I needed, after reading The Plague. I'm still enjoying My Life on the Road but I think I'm only about halfway through with it. I also started a book of Maya Angelou's poetry (the complete works, I think) but the first section was kind of a downer, so I set it aside and haven't returned to it. I may not finish it during National Poetry Month (this month) but I plan to pick that back up, this week.

I watched two movies based on books, this weekend.

A Man Called Ove has made it to Amazon Prime. It's another Swedish movie with subtitles, so Husband was in and out of the room while it was on. He's not into subtitles, although the movie clearly interested him. I thought it was handled very well! Since I read the book so recently, I knew exactly what was missing from the movie. For one thing, the cat's role was smaller than I thought it should have been. Once Ove takes the cat into his care, it goes absolutely everywhere with him, in the book. Not so in the movie. Maybe they thought it would be too much trouble trying to get a cat to sit still in a car. At any rate, I thought the movie was every bit as touching as the book and I did exactly the same thing as I did with the book -- sat with tears streaming down my face for the last 10-15 minutes.

I happened across Ella Enchanted while flipping through the movies that have just been added to Prime. Like A Man Called Ove, I've read the book. Unlike A Man Called Ove, the movie is way different from the book. The spell cast on Ella hasn't changed but the movie is goofy, with a modern bent: a medieval shopping mall with an escalator, music by Electric Light Orchestra and Kenny Loggins, etc. It's fun, but very, very silly. On the plus side, since Ella Enchanted is probably the Gail Carson Levine book I like the least, there was no dismay over Hollywood damage to a favorite. I just enjoyed the silliness.

My future daughter-in-law arrived toward the end of the movie and she said, "It's cute, but nothing like the book." Nod, nod. We agreed that The Two Princesses of Bamarre is a better book and one we'd like to see made into a movie.

In other movie news, we've been watching our local listings for Their Finest to show up in a local theater and it's finally within driving distance, if you don't mind driving 3 1/2 hours to see a movie (it's in Memphis and New Orleans), but hasn't arrived locally (down to a 30-minute drive). So, we may take a jaunt to Memphis, soon. We both really want to see the movie. I was on the list to get an ARC of the book it's based on, by Lissa Evans, but that never showed up and it turns out I already have a copy of the British printing, which I'd forgotten I owned. So, I'm also hoping to read that, soon.


©2017 Nancy Horner. All rights reserved. If you are reading this post at a site other than Bookfoolery  or its RSS feed, you are reading a stolen feed. Email bookfoolery@gmail.com for written permission to reproduce text or photos.
Posted by Bookfool at 12:42 PM