The Almost Sisters by Joshilyn Jackson and a Fiona Friday pic 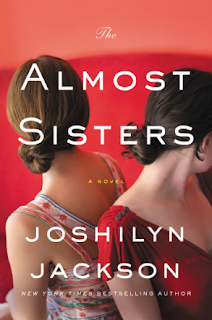 Leia is a successful illustrator of a graphic novel series who's been pushing men away for a long time. You don't find out till well into the story what caused her trauma, but she has good reason for her hesitation to commit. At a comic convention, she has a one-night stand with a man who was dressed as Batman and then promptly loses touch with him. But, it turns out her encounter has left her pregnant.

Leia steels herself to tell her sister about her pregnancy, only to find herself stepping into the middle of a marital meltdown. Similarly, she goes to her grandmother's house to help out and discovers that the timing is just not right. Her grandmother is suffering from a form of dementia and it's stressful enough just dealing with the everyday. When a secret that has been tucked away in her grandmother's attic comes to light, the situation is further complicated.

And, here is where I go off the rails and admit that I waited too long to review this book. So, I don't remember the characters or details as well as I'd like. But, I do remember that what's important about The Almost Sisters is the relationships. Grandmother, who is known as "Birchie", has a best friend who lives with her. Birchie is white, her best friend is black and they have been hiding that secret in the attic for decades. Leia is white, Batman is black, and since Leia is currently stuck in Alabama, she can't help but ponder the difficulties her unborn son will face as a child of mixed parentage. Not to mention not knowing how to find his father, even if she wanted to.

Again, so much happens in The Almost Sisters that it's hard to fit in everything that's probably worth sharing, so I'm just going to skip ahead to the bottom line.

Recommended - Bittersweet, uplifting, mysterious, and a little romantic. I liked the fact that there were so many strands to this story but what I really enjoyed most about The Almost Sisters was the relationships between Birchie and her bestie, Leia and Birchie, Leia and Batman, and the way Joshilyn Jackson tackled the complicated world of racism in the South. Jackson handled racial issues with grace and a depth of understanding and the result is seriously heartwarming. I got a bit teary at least once. I found The Almost Sisters a rather slow read, but one can't judge based on the speed of my reading, this year. It's just been another weird reading year. The book is a good one. 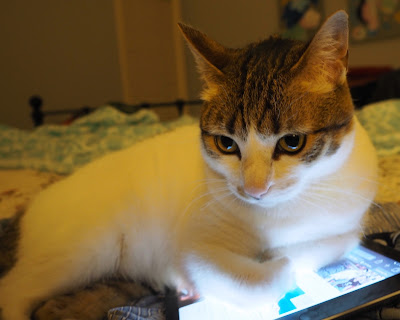 I don't know what the appeal is, but I have to be careful about setting down the iPad. Izzy thinks it's hers.

©2017 Nancy Horner. All rights reserved. If you are reading this post at a site other than Bookfoolery  or its RSS feed, you are reading a stolen feed. Email bookfoolery@gmail.com for written permission to reproduce text or photos.
Posted by Bookfool at 3:04 PM