Wow, October was quite a month, thanks to all the children's books I read! Look at that stack. Links to full reviews are provided, below (just click on the title). 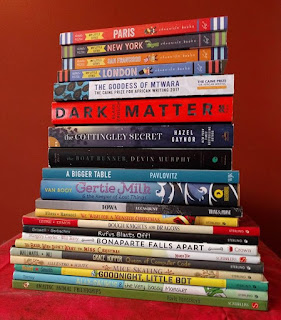 88. Iowa: Poems by Lucas Hunt - Just what it sounds like, a book of poetry about Iowa written by a poet who grew up there. Especially lovely for those of us who came from a small town in the Plains with the wind and the wheat and the beer cans by the dirt road and all that.

90. My Little Cities: New York by J. Adams and G. Pizzoli - The My Little Cities board books are low on words, but info about each location shown is detailed in the back. I discovered I don't know New York all that well, as I recall.

91. My Little Cities: Paris by J. Adams and G. Pizzoli - Paris. Board book. Really cute. Not much else to say, except this series is a great way to introduce extremely small children to cities around the world.

92. My Little Cities: San Francisco by J. Adams and G. Pizzoli - They're also great for travel with very young children because they won't get as beat up as books with tearable pages. I had some minor issues with San Francisco. I mean . . . what's an Embarcadero, anyway? Sure, I've been there but it wasn't clear.

93. Goodnight, Little Bot by Karen Kaufman Orloff and Kim Smith - I would be all over this book if the young robot hadn't eaten batteries. Just too nervous that a child might try to mimic the robot. The illustrations are marvelous.

94. Dough Knights and Dragons by Dee Leone and George Ermos - A boy and a dragon are meant to be mortal enemies but when these two meet and discover their mutual affection for cooking, they become fast friends and come up with a plan to avoid having to try to kill each other. So cute.

95. Rufus Blasts Off by Kim Griswell and Valeri Gorbachev - A book loving and very determined pig wants to go to space and works hard at figuring out the way to make it so. The third of the Rufus books; I advise reading them in order. Rufus is adorable.

96. Gertie Milk and the Keeper of Lost Things by Simon Van Booy - A mysterious island filled with lost things, a girl who has no memory of who she is, a time-traveling car, and a bit of magic make for a cool way to introduce middle readers to some interesting historical events.

97. Dark Matter by Blake Crouch - A scientist who gave up his dream to start a family is kidnapped by another version of himself, one who managed to finish the project he intended to make his life's work. Can he find his way home? By far the most gripping book I recall reading, possibly ever.

98. The Boat Runner by Devin Murphy - After attending a Nazi Youth summer camp, two boys return home to learn their father's business and work on their uncle's boat. When war breaks out, will they be forced to join the Nazis to survive? Very good, but not a favorite WWII book.

99. A Bigger Table by John Pavlovitz - Part memoir, part Christian living, the author tells about how he became a pastor and struggled with his beliefs vs. how the church expected him to behave and eventually, after being fired, began to preach what's in his heart - the concept of opening up the church to anyone and everyone, literally and figuratively building a bigger table like he believes Christ would do. A total comfort read for me.

100. The Goddess of Mtwara and Other Stories: The Caine Prize for African Writing, 2017 - A book of African stories (set in many different countries), some a little too African for this reader. The title story was one of my favorites.

101. Bonaparte Falls Apart by Margery Cuyler and Will Terry - A skeleton and his buddies have to figure out a way to keep him from having to constantly chase down the bones that keep falling off of him. He's not a very sturdy skeleton. Super cute.

102. Grace Hopper: Queen of Computer Code by Laurie Wallmark and Katy Wu - Admiral Dr. Grace Hopper, that is. A picture biography that tells the story of the woman who was the original coder. Girl power! Get this one for the young girl in your life. It's terrific.

103. The Cottingley Secret by Hazel Gaynor - A contemporary/historical blend that tells the story of the two girls who pretended their photos of fairies were real (based on the true story) and the entirely fictional story of a woman who inherits a bookstore, reads about the Cottingley fairies, and realizes she hasn't been true to herself. Absolutely charming.

104. We Wish for a Monster Christmas by Sue Fliess and Michael Michell - Two children wish for a monster for Christmas, their parents say "no" but Santa brings one, anyway. Havoc ensues. Lovely illustrations, slightly awkward rhyme.

106. Mice Skating by Annie Silvestro and Teagan White - One of my favorite children's books of the month, the story of a mouse who loves winter but has to really work at convincing her friends to come out of their nice, warm home to share in the fun. Wondrous, sepia-tinted charm, lovely writing, and cheese jokes.


©2017 Nancy Horner. All rights reserved. If you are reading this post at a site other than Bookfoolery or its RSS feed, you are reading a stolen feed. Email bookfoolery@gmail.com for written permission to reproduce text or photos.
Posted by Bookfool at 8:53 AM