All the leftovers - More Was Lost by Eleanor Perenyi, The Goddess of Mtwara, and The Lost Words by Robert Macfarlane and Jackie Morris

I haven't skipped reviewing many books, lately, but there are a handful I haven't gotten around to -- all purchases -- so I'm going to do a quick wrap-up of those, before writing my October and November review posts.

More Was Lost by Eleanor Perenyi is a memoir that tells the story of a WWII-era romance. The author met and fell in love with a Hungarian baron in 1937, at the age of 19, while on a European tour. His family owned a castle and a working farm with a number of outbuildings, although not the kind of crenellated stone building that one typically sees in picture books or photos (there's a photo section in the NYRB Classics edition, shown at left). After their marriage, the couple moved into the family castle and set about bringing the farm back to life and eventually dealing with the changes wrought by WWII.

The majority of the book describes the romance and the author's everyday life, running a large household and farm, learning the Hungarian language, rearranging the castle to suit their needs, interacting with the locals, the farm workers, society, and family, and the complexities of the changing borders. I don't know that I ever fully understood or followed the the intricacies of what was going on around the castle and the reasons it came in and out of the family's ownership (although I got the gist of it) because I'd never heard of some of the ethnic groups in the area. It was a little challenging to sort out their characteristics and the details of the changing political situation. But, I found More Was Lost immensely entertaining.

Highly recommended - Eleanor Perenyi was one determined and impressive woman. For a 19-year-old to marry the man of her dreams, in spite of expectations, and not only learn the language and how to run a farm and maintain a castle but deal with the coming war and the changing political situation was pretty astounding. The ending is fairly sad, but I found this memoir charming and a very enjoyable read.

The Goddess of Mtwara and Other Stories: The Caine Prize for African Writing, 2017 is a book I bought when I had time to waste while waiting for a flight at O. R. Tambo International Airport in Johannesburg. The stories are so diverse that it's almost impossible to describe them all, plus I spaced the reading out pretty dramatically. Some are so very, very African -- with words from various African languages mixed into the text -- that I found them difficult to follow and longed for a glossary. Others were only different from other English language stories in their setting or their very uniquely African type of magical realism. Some were favorites, some less so because they were disturbing and one was almost completely incomprehensible to me (I ended that one feeling as if it was, perhaps, a bit of experimental writing).

Recommended, if you happen to be in South Africa. There's not even an image of The Goddess of Mtwara at Goodreads, so I presume it's not an easy book to get hold of outside of South Africa, but I would definitely recommend it to those who are interested in reading some uniquely African writing.

I kind of hate not writing a full post about The Lost Words by Robert Macfarlane and Jackie Morris but I'll try to show and describe as much as I can in a small space. I think I've mentioned the fact that I started following Robert Macfarlane - an Oxford professor, collector of words, naturalist, and author - earlier this year. I'm not sure of the accuracy of what I've read, but somewhere I read that The Lost Words is the result of his determination to bring words that were being taken out of the Oxford English Dictionary back into use after he heard they were being removed.

The resulting children's book is beyond impressive, a book of words in which each letter of the word has a sentence of its own. Kingfisher, for example:

Kingfisher: the colour-giver, fire-bringer, flame-flicker, river's quiver.
Ink-black bill, orange throat, and a quick blue, back-gleaming feather stream.
Neat and still it sits on the snag of a stick, until with . . .
Gold-flare, wing fan, whipcrack the kingfisher - zingfisher, singfisher! -
Flashes down too fast to follow, quick and quicker carves its hollow
In the water, slings its arrow superswift to swallow
Stickleback or shrimp or minnow.
Halcyon is its other name - also ripple calmer, water nester,
Evening angler, weather-teller, rainbringer and
Rainbow bird - that sets the stream alight with burn and glitter!

I don't have a photo of the kingfisher spread but here's an interior shot of one of the other illustration spreads -- some of the artwork is across a single, facing page, some spans two: 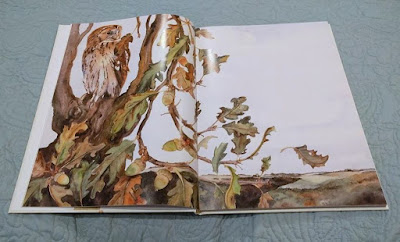 This is an oversized book, probably what one would call coffee-table sized and it is absolutely breathtaking.

Highly recommended - Spectacular in every way, with beautiful, poetic wording and stunning illustrations. The book is British and a bit pricey (I ordered my copy from Book Depository) but worth it. There are some British spellings (like colour in the kingfisher wording, above) and at least one word that may not be familiar to Americans: "conker". A conker is a kind of nut that you'll occasionally read about in British lit, mostly in regards to children playing games with them, but I can't say I know what kind of nut it is - from what tree, that is. No biggie; it's an excuse to learn something new and I can't imagine any word-loving, reading fanatic child not falling instantly and deeply in love with this book.

OK, this is all the leftovers but one. I just noticed I missed one book. I don't want to make this post any longer, so I'll save it for another day.

©2017 Nancy Horner. All rights reserved. If you are reading this post at a site other than Bookfoolery or its RSS feed, you are reading a stolen feed. Email bookfoolery@gmail.com for written permission to reproduce text or photos.
Posted by Bookfool at 1:24 PM