Links provided: click on the title to leap to the full review. 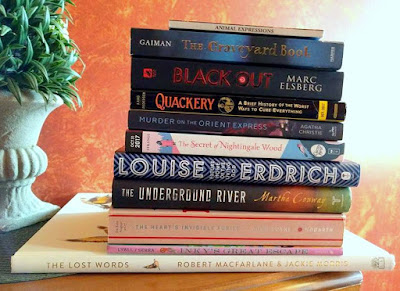 107. Blackout by Marc Elsberg - The power starts going out in countries across Europe. When a hacker discovers the reason is sabotage, people frantically work to restore power and uncover the culprits while food and medical supplies begin to run low.

108. The Secret of Nightingale Wood by Lucy Strange - A young girl's family moves into an isolated home to recover from grief but things grow increasingly worse when her father leaves home and her mother's mental state declines. Can she save her family? Lyrical writing, scary story.

109. The Underground River by Martha Conway - When a seamstress is caught in a boat explosion and loses the job working for her actress cousin, she gets a new job on a traveling theater on the river that separates slave territory from a free state. What will happen when she is forced to help spirit slaves across the river? A favorite. I absolutely loved this book.

110. The Graveyard Book by Neil Gaiman - A little boy escapes the murderer who kills his family and is raised by ghosts. But, the mysterious group that tried to kill him will not give up. A reread; liked it even better the second time.

111. Inky's Great Escape by Casey Lyall and Sebastia Serra - The tale of an octopus who has retired from his job as an escape artist but becomes determined to escape the aquarium where he lives, after he's challenged. Wonderful illustrations, great story, based on a real octopus escape.

112. Murder on the Orient Express by Agatha Christie - The classic murder on a train stuck in a snowbank. The train made the book; the mystery didn't do much for me.

113. The Lost Words by Robert Macfarlane and Jackie Morris - The most gorgeous, oversized, illustrated book of words you'll ever see. Humble opinion.

114. Future Home of the Living God by Louise Erdrich - Dystopian fiction about a near future in which climate change has screwed things up and evolution has decided to start going backwards. Loved the writing and characters but the world building was somewhat lacking.

115. The Heart's Invisible Furies by John Boyne - Cyril loves Julian. Julian loves women. Ireland hates gays. An absolutely brilliant story of what it was like to live as a gay man in Ireland, from birth in the 1940s to present day. Immersive, funny, horrifying. One of the best novels I've read, this year.

116. Quackery by Lydia Kang and Nate Pederson - Delightfully silly, a bit gross, and heavily, beautifully illustrated nonfiction about the really bad ways people have tried to cure each other of ills, over the past couple thousand years.

117. Animal Expressions by Judith Hamilton - A small, stunning book of animal photographs with quotations that fit the image.

©2017 Nancy Horner. All rights reserved. If you are reading this post at a site other than Bookfoolery or its RSS feed, you are reading a stolen feed. Email bookfoolery@gmail.com for written permission to reproduce text or photos.
Posted by Bookfool at 3:25 PM