When They Call You a Terrorist: a Black Lives Matter Memoir by Patrisse Khan-Cullors and Asha Bandele 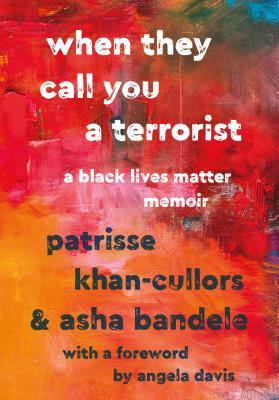 I love reading memoirs but sometimes they just rip your heart out and that's the case with When They Call You a Terrorist by Patrisse Kahn-Cullors, the story of the author's life and how she and two other women came to found the Black Lives Matter movement.

Beginning with her childhood in Van Nuys, California, Kahn-Cullors describes what it was like growing up impoverished, hungry, black, constantly dogged by law enforcement, and without much parental guidance. The author had 3 siblings and her mother, originally from a middle class background, was forced to fend for herself after her family kicked her out for becoming pregnant at 16. From the time she was small, the author knew her mother as a woman who left for work before dawn and came home late at night, working 2 or 3 jobs just to get by. Her father came and went after he lost his factory job and, eventually, Kahn-Cullors found out that she had a different biological father from that of her siblings. Both were unreliable in their own ways, so young Patrisse looked up to her brothers, the only reliable men in her life.

The author became aware of how black people were singled out by police at an early age, noting that the black people around her were treated differently by the court system, almost expected to become criminals, even in schools. The latter is something I was aware of when my children were in school. Posted in the window of the middle school office and outside the high school office were posters listing crimes and their likely punishments. I tried, unsuccessfully, to get them removed.

The author is bisexual (she prefers the term "Queer"), her eldest brother has a severe mental illness, and the entire family has been impacted by the targeting of blacks that came about due to the so-called "War on Drugs," so she has a lot of different challenges to tackle and all are described in gut-wrenching detail. Her experiences led her to become an activist at a young age and she describes the various movements that she participated in before she and two other women founded the Black Lives Matter movement.

What a shocking, horrifying, eye-opening read. One of the biggest surprises: I had no idea that the Black Lives Matter movement was founded by women and is still a women's movement. Kahn-Cullors expressed her frustration about this. There are men who participate and even they were well aware that in our patriarchal society the press gravitates toward the men for statements. I found myself nodding. Had the press focused on the fact that women founded the BLM movement, I wouldn't have gone into the reading of Patrisse Kahn-Cullors' memoir thinking otherwise.

The author talked about other efforts she's been involved in, besides the attempt to bring awareness to how the police and court systems treat black men vs. how they treat others. Some of those efforts were finding success until the recent presidential election set them back: the attempt to halt the building of prisons and instead funnel public funding into programs that positively impact impoverished communities, for example, and the effort to demilitarize police forces.

I found the challenge the author's brother and her family have faced, just in dealing with his mental illness, particularly interesting because it touches on a subject I've heard about, the fact that police officers are either not trained to discern the difference between mental illness and deliberate violence or too focused on racial profiling. I've heard of cases in which family members carefully warn police officers that someone is mentally ill and needs to be approached a certain way, only to be met with (often deadly) force, instead. The author speculates that the trauma of being targeted by police, treated violently, left without parents or support when their elders are imprisoned, and being imprisoned for offences in which nobody is harmed may even be the source of some mental illness. It took quite a few terrifying years and two imprisonments before her own brother even had a solid diagnosis, more time to get his medication balanced properly, and a continuing effort by a network of family and friends to keep him on his medication and get him the proper help when he needs it.

Highly recommended - A rough read, but a good one, I spent a great deal of my reading time with tears in my eyes. Some readers might feel a little judgmental about many of the details of Kahn-Cullors' life. She's not straight, her mother had 4 children by two different men, and drugs were, in fact, a common problem in her community. It's important to look past what some of us may consider "sinful" and think, instead, "What can we do to stop the impoverished from taking drugs, getting pregnant young, etc., in the first place? What societal changes will help stop the destructive patterns?" Kahn-Cullors offers up some solutions: creating green spaces, offering support to those who have parents in prison, providing medical and mental healthcare, feeding those who are hungry. I hope this memoir will help to open a few more eyes to the dramatic inequalities faced by black Americans.


©2017 Nancy Horner. All rights reserved. If you are reading this post at a site other than Bookfoolery or its RSS feed, you are reading a stolen feed. Email bookfoolery@gmail.com for written permission to reproduce text or photos.
Posted by Bookfool at 7:35 AM