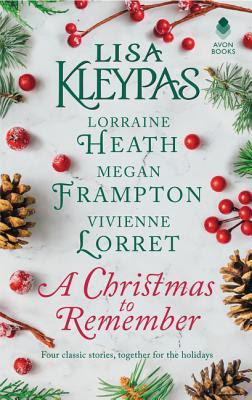 I can't leave for a holiday break without being completely caught up! And, I just finished A Christmas to Remember, last night. So . . . one last review, at least for now. I'm not going to stop myself from jumping online to review over the holiday break, if I feel like it, this year. Youngest son is the only person coming home and he isn't going to be around for long, so I'll return or just drop in to do a post or two if I feel like it.

A Christmas to Remember is a book of short stories with a Christmas theme (although, honestly, I don't recall a reference to Christmas in the first story -- I might have just overlooked it). I'm not a regular romance reader, so it's worth mentioning that I may approach this book through a different lens than the romance crowd, although I used to hang out with romance writers and published a romantic short story, myself (long ago, in a land far, far away). I'm completely unfamiliar with all four authors but I've heard the name Lisa Kleypas and her name appears in the largest font, so I presume she's the better known of the four. A little about each:

"I Will" by Lisa Kleypas - With a father on his death bed and threatening to cut off all money (but not the rest of the estate), Andrew, Lord Drake, needs to come up with a solution to convince his father to release the funds. He must find a young lady with an impeccable reputation and convince his father that she has reformed him from his dissolute ways. He convinces Miss Caroline Hargreaves to help him, promising to clear her brother's debts and stop leading him astray. But, Drake is surprised to find that the petite Miss Hargreaves hides a passionate, lovely personality behind her stiff exterior and spectacles. Will she reform the rake or will he use her and leave her hanging?

"Deck the Halls with Love" by Lorraine Heath - Lady Meredith Hargreaves is soon to be wed to Lord Litton, thanks to a kiss in a garden. Caught by her father and brothers, a wedding was considered the only possible solution to her compromising position. And, Lady Meredith thinks Lord Litton will make a fine husband. Months after the Season, she's still stung by the rejection of Alistair Wakefield, the Marquess of Chetwyn. Now, Chetwyn's intended is marrying another man and his sights are back on Lady Meredith. With a Christmas wedding soon to take place, can Chetwyn convince the only woman he ever truly loved that he's right for her?

"No Groom at the Inn" by Megan Frampton - Lady Sophronia Bettesford's father was not wise with his money and now she's on her way to take care of a relative's children and chickens. While she's waiting for her coach to arrive, James Archer shows up and asks her to marry him. Then, he clarifies. He needs a fake betrothed to accompany him to a party in the country. For mere weeks of pretending, he's willing to set her up in a country cottage. Sophronia is thrilled to have her lady's maid restored to her side and no prospect of chickens in her future. But, will she be able to tame the restless traveler who is slowly stealing her heart?

"The Duke's Christmas Wish" by Vivienne Lorret - Ivy Sutherland has passed her season without success and is now firmly planted on the shelf. But, her friend Lilah is in need of a husband and Ivy is certain that the Duke of Vale will perfectly fit the bill. Lodged in the duke's immense castle with at least 100 guests, there are plenty of young ladies from which the duke might choose. But, he's distracted by his science experiments and inventions, especially a formula for marriage that the duke believes will save the trouble of going through that awkward Season business. In his ledger, he says Ivy is of "no consequence". Then, why does he find that he has eyes only for her? And, how can he resist a woman who comes up with a better idea to fix a problem with one of his inventions than he himself has imagined?

So . . . not the typical romance reader and I would not have thought to buy this book, but Avon sent it to me, unsolicited. And, wow, am I happy they did! Some years I'm in the mood for holiday reading, sometimes I avoid it. This year, I was craving a little Christmas spirit and I am perfectly fine with a bit of fluffy, predictable romance. And, for the most part, these stories were very predictable. While the final story, "The Duke's Christmas Wish" was, in my humble opinion, a little rough around the edges, I thought it was the least predictable of the four. But, I enjoyed them all.

My hands-down favorite was the third story, "No Groom at the Inn," by Megan Frampton. Sophronia starts out the story a bit on the stiff side. She doesn't want to be called Sophy or Sophycakes, as James lightly proposes. She has a love of words, her father having played the Dictionary Game with her for many years, and each chapter begins with a quiz - which of the three definitions fits the word? The answers are at the end of the story. There are loads of references to the chickens Sophronia will no longer have to tend, some surprisingly witty dialogue, and a marvelously clever ending in which James plays a game to let Sophy know his feelings have been altered. Even at around 100 pages, I found "No Groom at the Inn" surprisingly convincing because the two characters seem suited to each other. They're able to catch each other's meaning when necessary with vague gestures and their dialogue is frankly adorable. By the end of the story, Sophronia is fine with whatever James wants to call her and even responds in kind.

Highly recommended - I'm not sure how regular romance readers would feel about this set of short Christmas stories, but I loved being swept up in a little holiday romance and thoroughly enjoyed A Christmas to Remember. There were several deflowerings of young ladies, so I added a family warning for those who are sensitive about sex scenes. When I regularly read romance, I favored clean romance but I that was primarily because I prefer that a romance is about the things (apart from sex) that make a relationship magnetic, like what two characters have in common, what makes them laugh or lean in to hear more or think twice about that person that didn't appear to be their type, at first. I thought the interaction between the characters was charming and I was enchanted by all four stories.

Final cat photos! It would be easy to blame today's cat crazies on the unexpected snow we got overnight (!!!!) but they never go outside, so I think it was just cats being normal. Here's a pic of their dust-up, followed by the innocent look, after they finished whacking each other. 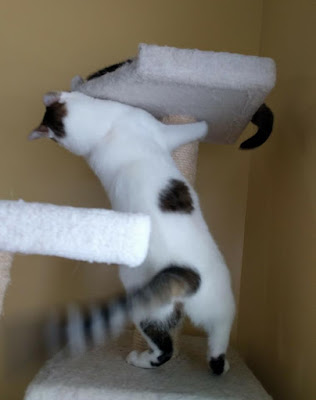 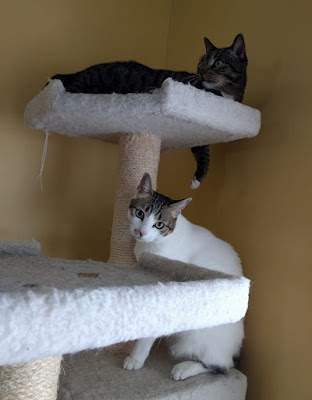 Wishing the happiest of holidays to all!

Bookfool, with Isabel, and Fiona

©2017 Nancy Horner. All rights reserved. If you are reading this post at a site other than Bookfoolery or its RSS feed, you are reading a stolen feed. Email bookfoolery@gmail.com for written permission to reproduce text or photos.
Posted by Bookfool at 2:10 PM