I fully expected to sneak in some posting over the holiday break but I should have known better. When family is around, I do family things and that's that. "Family things" mostly involved a lot of going through cabinets and piles, sorting, organizing, purging. It was a pretty productive holiday season but a quiet one because Kiddo was only around for a short time, his fiancée even less, and the rest of the season it was just Huzzybuns and me. Not a bad thing, really, since it meant we got a lot accomplished. 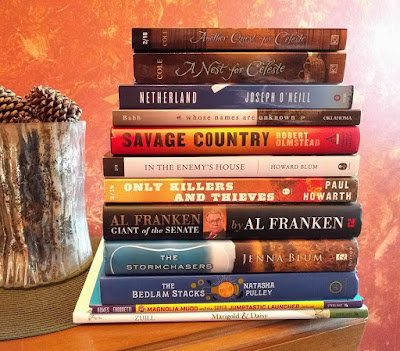 
Although they don't look it, two of those books were purchased at a secondhand bookstore. And, unfortunately, the slip jacket of one of the children's books was nibbled on by a cat. Only 4 are review books and I'm happy about that. There's a distinct possibility that some books have been recently stolen from our mailbox, though, although I can't say for sure. Quite a few that I requested during the last 6 weeks or so before my holiday simply didn't arrive, at any rate, and I spotted a mailbox thief and called local law enforcement, not long before Christmas. But, I'm planning to request fewer ARCs and really work on tackling books that are already in my home in 2018, so maybe starting out with fewer new ARCs is not a bad thing. Incidentally, I have no idea whether or not law enforcement managed to catch the mailbox thief (who was driving a small U-Haul rental truck) but I saw a police car whip past my house twice after the phone call, so I know they at least tried.


Since I left early in December, that's almost the entire month's reading and it will be repeated in a December round-up post. So, I'll save the critiques for later but I will say that A Gentleman in Moscow was not only my favorite for the month but also for the entire year. Saving Tarboo Creek was the first book I finished in 2018. Although I finished it at 12:30 AM and Goodreads decided to chunk it into my 2017 reads, I went back and altered the recorded date because I prefer getting a good head start on the new year to bumping up my number for the old one. It's excellent, by the way. Again . . . more about that, later.


I was somewhat shocked to find that The Bones of Grace, an ARC, has a 2016 publishing date on the spine. It doesn't feel like it's been 18 months since it arrived! It was that discovery that made me realize just how far back some of the ARCs on my stacks go and come to the conclusion that I just need to keep working on reading what I've got and reduce the number coming in. Not that that's new or anything, but sometimes I just become accustomed to the influx and blithely go about my business without giving the backlog a great deal of thought. I hope to be more deliberate about my reading, this year, and request ARCs with greater care.

I'm not sure but Braving the Wilderness may also have arrived during my holiday break. It's a book that was recommended by a new friend - someone I've only met once and spoken to on the phone once but with whom I felt an instant rapport. Her enthusiastic recommendation convinced me that I should give the author a try. I've only read one chapter but I'm finding her thoughts fascinating. And, Forty Autumns is also an ARC but it fortunately has not languished for years as it was an October, 2017 release.

I was so busy during my holiday break that I haven't given a great deal of thought to my reading plans for the year, although I have some other personal goals. However, Saving Tarboo Creek gave me some things to think about. It's a book about the rehabilitation of damaged land but it's also about connection with nature and how healing it is to spend time outdoors. That led me to think about how much I loved running in the military park and the fact that I haven't found a place near my new home where I can just walk and enjoy the beauty of flowers and trees, the sound of birdsong, and the spiritual connection you get from being close to nature. It also made me reflect on the kind of writing that emphasizes these things, particularly books about Native American and Buddhist beliefs - those that focus on man as part of a greater whole and his connection to the natural world. So, I'm definitely going to seek out some spiritual reading material in that vein, this year. And, possibly more about climate change. And, more challenging literature. And, and . . . oh, lots to think about.


©2018 Nancy Horner. All rights reserved. If you are reading this post at a site other than Bookfoolery or its RSS feed, you are reading a stolen feed. Email bookfoolery@gmail.com for written permission to reproduce text or photos.
Posted by Bookfool at 1:55 PM