When I look at the stack of books I acquired, this week, I feel like one of those characters in a movie who has done something terrible and shouts (as he's being handcuffed), "I can explain!" All of this week's acquisitions were purchased. I'll tell you why there are so many, in a bit. 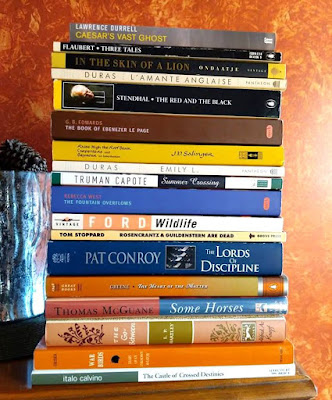 
OK, so why the huge stack? Our local secondhand bookstore (the only bookstore within 30 miles, actually), Pentimento Books, is going out of business. Normally, I seldom go there because they're a bit pricey but at 50% off the prices were reasonable. I decided to focus on books that are either classics or by well-known authors I've enjoyed (I often like their less famous books better), authors I've had on my mental radar but not gotten around to, and WWII.

The WWII pile is not shown, apart from War Birds, because it's doubly embarrassing. I bought Churchill's entire history of WWII in one volume and The Greatest Generation by Tom Brokaw, along with a very thick "Armed Services Edition" of a History of WWII. A couple of the books in that stack are just random titles that piqued my interest. The Go-Between just sounded fun and I've got one book by Lawrence Durrell, so I bought it a friend. Not pictured is a book I've already read, If This Isn't Nice, What Is? by Kurt Vonnegut. It's a book of speeches which I probably will not recommend, although there are bits of wisdom between its covers. It made me want to read more Vonnegut, so I ordered a couple Vonnegut books and they'll show up in next week's arrivals.

Huh. Now that I look back, I can see that I didn't like much of what I finished last week. The Dry is excellent, but Milk and Honey didn't do a thing for me and If This Isn't Nice, What Is? was a bit on the repetitious side. Braving the Wilderness is a book that I sometimes enjoyed and sometimes found a yawn because I honestly could not entirely discern its purpose. But, I'll tell you more about that when I review it. I'll probably do a single post with mini reviews of those three.


Not a big posting week, unsurprisingly after the heavy posting of the week before.


Oy. I can't say I'm in love with any of these books, either. A Nest for Celeste is lovely to look at and has its charming moments but it can also be brutal (the mouse watches a rat get killed by the cat of the house, a bunch of people shoot "thousands" of passenger pigeons out of the sky, and then the famous illustrator, Audubon, shoots an ivory-billed woodpecker and lets it slowly die before pinning it up to illustrate). It's harsh, to say the least. The Radium Girls (bought for discussion) is deeply sad because it's the true story of a company hiding the fact that their painting process was causing the slow, torturous poisoning deaths of its former employees -- the reason for all those "burdensome" regulations on corporations in a nutshell. And, Flowers for Algernon is also sad. But, I really want to finish it because I want to get back to reading a classic per month. I'll definitely need to find something a bit more upbeat to read after all this.

No other news, today. It wasn't a particularly eventful week, apart from visits to the bookstore that's going out of business and my very first Paint Night with a friend. We painted a snowman with sand mixed into the paint to give the snow texture and glitter spinkled on top of the snowman's body. Fun!

©2018 Nancy Horner. All rights reserved. If you are reading this post at a site other than Bookfoolery or its RSS feed, you are reading a stolen feed. Email bookfoolery@gmail.com for written permission to reproduce text or photos.
Posted by Bookfool at 5:14 PM