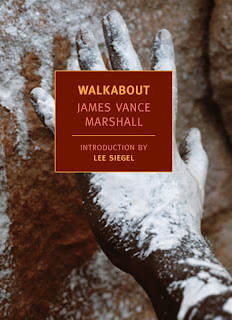 I read Walkabout by James Vance Marshall as an ebook (shockingly, I've actually read two e-books in the past month and am in the middle of another) because my eldest son had just finished it when I put Walkabout on my wish list and he said, "It's very short. I'd advise you to just read the e-book instead of ordering a paper copy."

Walkabout is the story of two children who are the only survivors of a plane crash in the Australian Outback. Brother and sister, Peter and Mary are from Charleston, South Carolina, their destination Adelaide, where they planned to visit their uncle. The book begins just after the plane crash. The two watch the plane burn and then curl up together and fall asleep, although Mary intends to watch for hazards but is overcome by exhaustion.

I finished Walkabout in a single December afternoon and have forgotten some of the details, like how old the children were, but I'm guessing Mary was around 10 and Peter 6. At any rate, they're young enough not to know that it would be best for them to stay close to the wreckage, which is near a creek. Instead, they set out to walk to Adelaide. It's desert dry and they're unfamiliar with the land and its creatures, so they're likely within hours of death when they encounter an Aboriginal boy. They can't communicate but they're able to convince him to help them.

How much of the story is accurate to the life of Aborigines I can't say, but the introductory material in the NYRB version says James Vance Marshall was not the real name of the author but it was, in fact, a real man's name - the name of a man who had spent some time in the Outback and whose notes the author obtained access to, with the permission of his son. So the author did have access to knowledge, if not first-hand experience.

The biggest frustration for me, and probably this is true of most females, was the fact that once the Aboriginal boy (who has gone walkabout as a rite of passage) realizes Mary is female, he treats her like a pack mule or servant rather than a fellow human being. I'm curious if that was true in a particular tribe or just something the author came up with, perhaps a product of the times or an assumption about natives, as the book was originally published in 1959. Walkabout left me with a lot of questions. But, the bottom line is that I enjoyed following the children and their new friend as he helped them learn to forage, follow the shadiest path through the desert, and gave them instructions on how to survive the final leg of their journey.

Recommended - My son drew my attention to some minor anachronisms that I missed and the story is not a perfect one, but I enjoyed Walkabout primarily for the survival aspect. Peter worked to learn the Aboriginal language during their days in the desert; Mary did not. But, the level of communication, while shallow, was enough that even when the Aboriginal boy died (the implication being that he willed himself to death after the girl looked at him in shock and he decided she'd seen death in his future) he was able to let them know where they needed to travel to reach water and, therefore, survival. Fascinating but very brief reading. You can finish this one in an hour or two. It's closer to novella length than novel length.

Notes on the movie by the same name: I have not seen the movie based on Walkabout, which my son says is a bit of a cult classic, but there are some significant differences. I read about the movie and decided it definitely isn't something I want to watch, especially since it's so very different from the book. The movie begins with a man taking his children in the desert to kill them, not with children surviving a plane crash.

Addendum: It wasn't till I posted a link to this review that I remembered a second frustration besides the way Mary was treated by the Aboriginal boy and that was the fact that the children called the boy, "Darkie". I kept hoping they'd try to exchange names but it never happened and they continued calling him "Darkie" or referring to him as "the darkie" throughout the story. It's also worth mentioning that the children didn't particularly sound American. They occasionally used expressions I know to be common in the UK.

©2018 Nancy Horner. All rights reserved. If you are reading this post at a site other than Bookfoolery or its RSS feed, you are reading a stolen feed. Email bookfoolery@gmail.com for written permission to reproduce text or photos.
Posted by Bookfool at 1:56 PM